HAY FEVER – REVIEW OF COWARD’S PLAY AT THE DUKE OF YORK’S THEATRE, LONDON

Is it possible to stage Noel Coward’s Hay Fever with a talented actor like Felicity Kendal, directed by an equally talented director like Lindsay Posner and produce a … well, a dud?

The current production now playing at the Duke of York Theatre in London was first performed at the Theatre Royal Bath in August 2014. The set is beautiful, the cast is excellent and there is no reason why it does not work. Yet it does not. 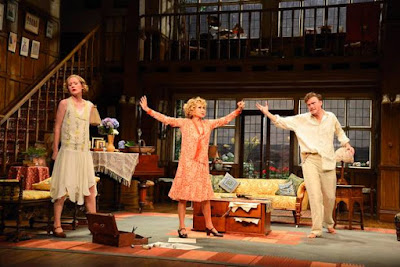 Coward himself said that Hay Fever was “far and away one of the most difficult plays to perform that I have ever encountered.” The difficulty may be in the fact that the rudeness and mistreatment of people is difficult to make amusing.

The Bliss family is eccentric, egocentric, free-spirited and in their own world. Judith (Felicity Kendal), the mother, is a former actress and is flamboyant and theatrical as becomes a star. Her husband David (Simon Shepherd) is a novelist with his own eccentricities. Their children Sorel (Alice Orr-Ewing) and Simon (Edward Franklin) are rude, spoiled brats who have no regard for other people. They do not possess even a  modicum of good manners.

The Blisses have a home in the country beautifully designed by Peter McKintosh and lit by Paul Pyant.

Each of the Blisses invites a guest for the weekend to their country home without informing the others. Four guests arrive and they are treated with astounding rudeness and callousness. The maid (played by Mossie Smith with almost no laughs) opens the door and immediately slams it in the face of the guests. The guests extend a polite hand to Sorel and Simon and they ignore them and walk away. What should be amusing to the audience as eccentricity comes out as simply and merely offensive.

Michael Simkins as the three-piece-suited diplomat is amusing in his awkwardness and correctness in an embarrassing situation. Edward Kilpatrick as the boxer Sandy is the butt of Judith’s and Sorel’s amusement. Celeste Dodwell as Jackie and Sara Stewart as Myra are more or less helpless victims of the Bliss family.

That is not how things should work. The eccentricity of the Bliss family should be (and in many productions clearly is) a source of humour and not unease for the audience.
Felicity Kendal can and does handle the character of Judith with aplomb but the production as a whole simply misfires and the audience is treated to only a few laughs.

Hay Fever  by Noel Coward continues until August 1, 2015 at the Duke of York’s Theatre, St. Martin’s Lane, London WC2, England.
Posted by James Karas at 2:57 AM