THE SOUND OF MUSIC - REVIEW OF STRATFORD FESTIVAL PRODUCTION

The Stratford Festival has chosen The Sound of Music as its big offering for the current season. It is a grand production, successful and thoroughly enjoyable from every point of view.

You may now stop reading the rest of the review and go to Stratford to see the great musical.

I have to justify my press tickets and write a few more words of praise after a marvelous evening at the theatre. 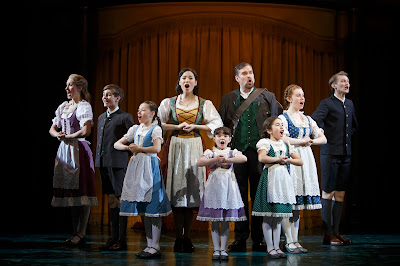 Members of the company in The Sound of Music. Photography by David Hou.
Let’s start with the overall production values for which chief praise belongs to Donna Feore who directs and choreographs the staging. The large cast, the numerous scene changes (there are twenty listed in the script), the adroit dancing and the concomitant complexities would tax the stamina of a general. Feore seems to handle it with aplomb and the result is musical comedy at its best. Designer Michael Gianfrancesco deserves great credit for sets that can be changed quickly and go from an abbey to mountainside, the von Trapp mansion and a concert hall.

The performance is dominated by Stephanie Rothenberg as Maria, the postulant who is sent to the house of Captain von Trapp (Ben Carlson) to look after his seven children. Rothenberg sings gorgeously and is highly entertaining. Carlson starts as the humourless naval officer but develops into a loving father and husband as well as a singer. With seven wonderful children who sing, dance and create humour not a single heart string is left unplucked.

Anita Krause leads an abbeyful of similarly attired nuns (what did you expect?) but she shines as the Mother Abbess who belts out the soaring “Climb Ev’ry Mountain.”

Robin Evan Willis is the wealthy and stunning Elsa who wants to marry the captain. She has all the attributes that men dream of with one minor defect – she is a Nazi. Auf Wiedersehen, Elsa.

Shane Carty gets all the laughs assigned to Max Detweiler, the cynical friend of the family and the invading Nazis who is instrumental in having the von Trapp singers perform in a concert and escape.

It would be churlish to complain about anything after being so thoroughly entertained by such a thrilling and extraordinary production. I have no complaints.
_______

The Sound of Music, music by Richard Rodgers, lyrics by Oscar Hammerstein II, book by Howard Lindsay and Russel Crouse, opened on May 26, 2015 and will run in repertory until October 18, 2015 at the Festival Theatre, Stratford Ontario. www.stratfordfestival.ca
Posted by James Karas at 1:30 AM