THE AUDIENCE – REVIEW OF MORGAN’S PLAY AT APOLLO THEATRE, LONDON 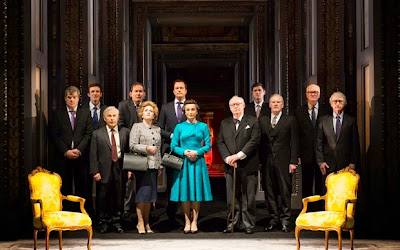 Kristin Scott Thomas as Elizabeth II with the cast of the The Audience. Photo: Johan Persson

The Prime Minister of the United Kingdom goes to Buckingham Palace every Tuesday to bring the queen up to speed on what is happening in the nation. It is a long standing tradition but what is said is completely confidential. Playwright Peter Morgan has written a delightful play based on fictional meetings between Queen Elizabeth II and eight of the twelve Prime Ministers who have served under her since her coronation in 1952.

The role of the queen was originally created by the inimitable Helen Mirren and the play has now been revived in London with Kristin Scott Thomas in the leading role with a different cast for the rest of the characters. Mirren is reprising the role in New York.

I take the advice of Dogberry that comparisons are odorous and will refrain from making any references to Mirren’s performance.

The play is funny, touching, immensely fascinating, highly informative (even if fictitious) and simply wonderful theatre.

Scott Thomas’s Elizabeth is intelligent, statuesque, regal, humane and knowledgeable with a highly ingrained sense of duty and entitlement. We see Elizabeth as young girl (played by other actors), as a young woman in 1952 and successively through the rest of the twentieth century and into the 21st century when she meets Gordon Brown and David Cameron. She changes dresses, make up and wigs with impeccable speed sometimes on stage and at other times during brief intervals when she is in the wings.

Footmen, horse guards, an equerry, private staff are all lined up to provide service that is so flawless it is almost ritualistic. A private audience room with rich furnishings, high columns and ceiling makes up the opulent background. This is no middleclass shack.

The Prime Ministers may bear some verisimilitude to what is known about them but Morgan exaggerates their conduct for humour and is quite successful at it. 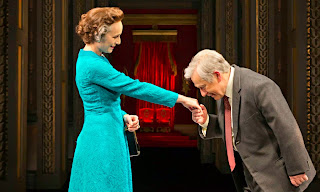 Kristin Scott Thomas as Elizabeth II, with Nicholas Woodeson as Harold Wilson. Photo:: Johan Persson
Harold Wilson (Nicholas Woodeson) lights up a cigar and explains that the pipe that he usually smokes is strictly for public consumption. He eats some cake with his hand and slobbers cream on his face. Not very likely, but very funny. In the end he comes out as perhaps the most sympathetic Prime Minister when he admits to the queen that he is beginning to suffer from dementia.

The queen falls asleep during David Cameron’s (Mark Dexter) visit and the scene becomes hilarious as he tries to get her attention. Dexter doubles as Tony Blair who comes out as far less sympathetic.

John Major (Michael Gould) is funny as he relates how he was thrust into the public eye from being completely unknown and then ends up as prime minister. The astute Elizabeth advises him to resign.

Anthony Eden (David Robb) comes out as the pathetic blunderer who was kept waiting in the wings for far too long by Winston Churchill. When he finally got the top job he colluded with Israel on the invasion of the Suez Canal and lost the top job shortly after that.

Margaret Thatcher enters like a self-righteous hurricane complaining that Elisabeth has breached tradition and constitutional protocol by commenting on the Prime Minister’s policies. The queen is too good to fall for that and politely but firmly brushes off such comments.

Director Stephen Daldry does a superb job in orchestrating the performances and the scene changes. The play shows the coronation scene where Elizabeth is not merely crowned but consecrated by God. That gives us some perspective just in case we were fooled into thinking that she is “one of us.”

A wonderful night at the theatre.
____

The Audience by Peter Morgan opened on May 5, 2015 and continues at the Apollo Theatre, 31 Shaftesbury Avenue, London, England.  http://www.apollotheatrelondon.co.uk/
Posted by James Karas at 4:58 PM