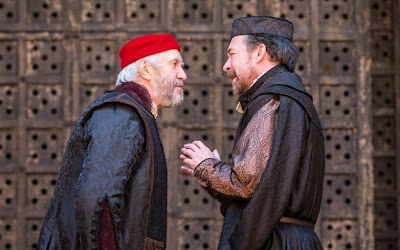 Shakespeare’s Globe Theatre has produced a masterly and memorable production of The Merchant of Venice that emphasizes the religious aspect of the play and does full justice to its comic side as well.

Most of the credit must go to Jonathan Munby, the director who has fashioned a production that is faithful to Shakespeare and at the same time expands our view with his brilliant interpretation.

The production boasts a stellar cast with some truly outstanding performances. Jonathan Pryce’s Shylock is a strong and confident businessman who has to put up with virulent attacks on his person by the good citizens of Venice. Their anti-Semitism is so ingrained that they are utterly incapable of realizing the depths of their inhumanity. When a Venetian spits on him Shylock calmly takes out a handkerchief and wipes the spittle off his sleeve. When he appeals to their humanity, they hear nothing. A magnificent and powerful performance by Pryce.

Rachel Pickup is an excellent Portia. She is entertaining as the woman who must allow some pretty odd strangers to bid for her hand in marriage by opening one of three caskets. She is very good when she must pretend she is a learned lawyer in the court scene. Shylock almost interrupts her several times during “the quality of mercy” speech which is not as effective as I would have hoped it would be.

Stefan Adegbola as Launcelot Gobbo simply brings the house down in the scene where he tries to decide whether to leave Shylock’s service. Munby has him grab two yardlings, one of them to represent his conscience and the other to act as the devil He questions them as to what he should do. It is a hilarious scene. Adegbola is entertaining throughout.

Munby gets lots of laugh from Portia’s suitors as they try to figure out which casket to open. Scott Karim as the Duke of Morocco and Christopher Logan as the Prince of Aragon are very funny.

Dominic Mafham as Antonio, Daniel Lapaine as Bassanio, Ben Lamb as Lorenzo and David Sturzaker as Gratiano are upstanding and well-acted Venetians who have a slight defect (the characters, not the actors) in their view of Jews.

In the courtroom scene Shylock forcefully asks for justice by having the letter of the law enforced. We believe him to be right despite the pleas for mercy by the anti-Semites. (By the way, for those interested in the enforceability of the bond, the answer is simple: the bond is not enforceable as a matter of public policy. Happily it is enforceable as a matter of dramatic necessity.)

When Shylock is about to claim his pound of flesh, Antonio stands up and his feet are tied up. He raises his arms and they are tied up to a pole and he appears crucified. His friends rush to him and they provoke laughter. He is no Christ.

The final scene is a masterpiece. After the jolly recognition scene, the only thing remaining is for the three happy couples to start their married life with the proverbial honeymoon.

At this stage Jessica (Phoebe Pryce) goes to the front of the stage, kneels, and starts singing a dirge.

A priest dressed in a white cassock and carrying a large cross appears. He is followed by a number of similarly dressed men, deacons I presume, who form a triangle behind him. Shylock, dressed in a white shirt, walks behind the priest as the procession proceeds solemnly to the front of the stage, beside the singing Jessica. The priest is about to christen the distraught Shylock and the deacons chant the baptismal service in Latin which includes asking the future Christian if he believes in the basic tenets of Christianity. Shylock, a man in agony, groans “credo” as he is completely deprived of his dignity and humanity. Water is poured over his head three times; he is duly christened and led off the stage.

Jessica, who is supposed to join her husband Lorenzo and continue her life as a Christian, walks to the back of the stage to join him. But as the door is about to close she steps back and turns towards the audience. She will not go on. It is a moment of redemption for a woman who betrayed and sacrificed everything that she was born to and raised with on the altar of anti-Semitism.

The whole scene is an incredibly moving coup de théâtre and a magnificent conclusion to this marvelous production.
_________

The Merchant of Venice by William Shakespeare opened on April 30 and continues until June 7, 2015 at Shakespeare’s Globe Theatre, 21 New Globe Walk, London, England. www.shakespearesglobe.com
Posted by James Karas at 5:59 PM