YOU NEVER CAN TELL – REVIEW OF SHAW FESTIVAL PRODUCTION 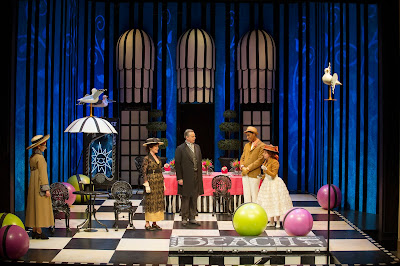 You Never Can Tell, one of Bernard Shaw’s early comedies, gets a spirited production at the Royal George Theatre. Director Jim Mezon throws in everything to generate energy and excitement in a play that is light by Shavian standards and by no means one of his best. But Shaw never lets you off without commentary about women’s rights, meritocracy and social issues.

The play is set in a seaside resort in southern England where we meet the Clandons. They are not your typical family. Mrs. Clandon (Tara Rosling), abandoned her husband and England and has been living in Madeira for 18 years with her twins. This is her first trip back to England. She is smart, self-supporting and revolutionary in her views.

She has a very serious daughter, Gloria (Julia Course), who is made to look very unattractive in the early scenes. She has a nose that is so sharp she can cut down trees with it.  Near the end of the play, she heaves her ugly glasses and appears very attractive. Course carries herself well as the self-possessed, self-assured new woman of the twentieth century who eventually falls in love.

The “opposite” of the Clandon children is the penniless dentist Valentine (Gray Powell). He has had only one patient, he is willing to do anything for a few shillings and is a lively young man. Powell handles the role with relish. 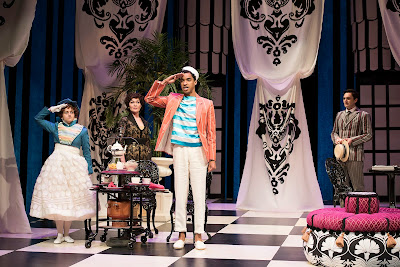 Jennifer Dzialoszynski, Tara Rosling, Stephen Jackman-Torkoff and Gray Powell. Photo by Emily Cooper.
The Clandon children have a peculiar problem: they do not know who their father is and demand that their mother tell them.

Patrick McManus plays the dour, irascible and morose Fergus, the father of the Clandon children. His red cheeks bespeak his drinking habits and his temper makes him funny despite himself. Peter Krantz has the delightful role of Finch M’Comus, a solicitor, who can’t get anywhere with anything. He is funny.

The play has a waiter who is stiff, proper, wise and amusing. Peter Millard plays William with ritualistic movements and comes to dominate the scenes that he is in.

The sets by Leslie Frankish from the dentist’s office to scenes in the hotel are bright, colourful and indeed help create a carnival atmosphere suitable to a play where anything is possible and you never can tell what will happen next.
______

You Never Can Tell by Bernard Shaw continues in repertory until October 25, 2015 at the Royal George Theatre, Shaw Festival, Niagara-on-the-Lake, Ontario. www.shawfest.com.