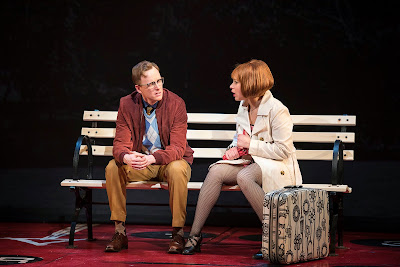 Sweet Charity is a 1966 Broadway musical that the Shaw Festival has revived as its flagship musical of the season. It is an old style musical which means it has songs with melodies that are integrated in the plot. The plot itself consists of interconnected episodes in the life of Charity Valentine, “a hooker with a heart of gold” as they say. The episodes and humour are 1960’s vintage and familiar to those of a certain age from television musical comedy shows and films.

The production and the performance deserve words of praise that are unfortunately peppered with reservations. The ultimate conclusion will be that is that this is a good, energetic production with some very good dance routines but not entirely successful. Julie Martell’s singing is good and but one wanted it to be better. That holds for the rest of the singers. They leap when you expect them to soar.

Charity works in the Fandango dance hall as a dance hostess. Her co-worker puts it less charitably as the rent-a-body job. Charity does have a heart of gold, she dreams of a better life and, to put unkindly, is just plain stupid.

We meet Charity in Central Park imagining being engaged to a hunk of a man who simply pushes her in the lake and steals her purse. Neil Simon, who wrote the book, satirizes the New Yorkers for their aloofness as they watch the young woman drowning and run away. A Spaniard, a foreigner, saves her. 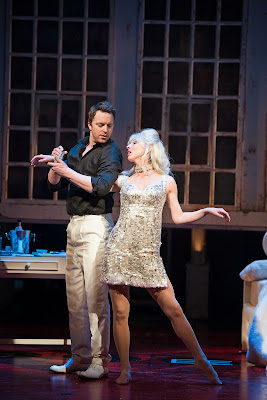 Mark Uhre as Vittorio Vidal and Jacqueline Thair as Ursula inSweet Charity. Photo by Emily Cooper
In the next scene, Charity ends up on the arm of movie star Vittorio Vidal (Mark Uhre). He has an argument with his dizzy blonde girlfriend Ursula (Jacqueline Thair). Charity ends up in Vittorio’s apartment (“If my friends could only see me now” she sings) but the party is broken up when Ursula arrives. There is ample opportunity for farcical comedy and director Morris Panych takes advantage of it as Charity tries to hide from the jealous and suspicious Ursula.

Charity tries to upgrade herself by going to classes at the YMCA. She is trapped in an elevator with Oscar (Kyle Blair), a decent, shy, claustrophobic, slightly damaged young man and they end up going to a hippie church and are subsequently stuck on a Ferris wheel. She is afraid of heights. There is comedy, touching emotional contact and singing as the two “losers” reach out and fall in love.

Jay Turvey plays the dictatorial but amusing owner of the Fandango. Nickie (Kimberley Rampersad) and Helene (Melanie Philipson) are Charity’s friends at the Fandango who have their feet on the ground and their dreams of a better life in check.
Neil Simon, Cy Coleman (book) and Dorothy Fields (lyrics) created a very good show combining comedy, dance and songs. Musical Director Paul Sportelli has decided to jazz up the original instrumentation with, in his words, “electric bass, electric guitar and an array of classic keyboard sounds.”  It made the orchestra louder without improving the sound of the music.

We approach the final scene of Sweet Charity hoping that the hooker’s dream will be fulfilled; she and Oscar will find happiness running a Mobil gas station and love will triumph. Alas.
______