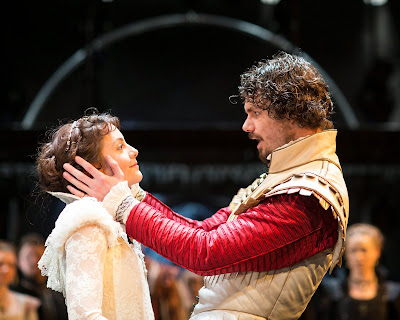 The Royal Shakespeare Company has staged Love’s Sacrifice by John Ford in Stratford-upon-Avon. I venture to say that the likelihood of most of us having heard of John Ford or seen any of his plays is slim. The play was written in 1633 and falls in the genre of revenge tragedies. The RSC has a program of producing almost forgotten plays from that era and this is one of them.

The production is in the Swan Theatre directed by Matthew Dunster. It is done in Elizabethan costumes and Dunster generates considerable energy as he gives us a fine example of the bloody genre that the audience in the days of Charles I enjoyed.

The play is about love, uncontrollable passion, intrigue, treachery and, of course, revenge. Let’s take the subplot. The dashing courtier Ferentes (played by the appropriately named Andy Apollo) seduces three ladies of the court with extravagant expressions of love and promises of marriage and fidelity. He gets them all pregnant. During a masked ball they open their bodices and we see videos of babies projected on their stomachs. The three women gang up on Ferentes, tie him up and execute him in public. That is sweet revenge.

The main plot involves the Duke of Pavy (Matthew Needham) who marries a beautiful commoner named Bianca (Catrin Stewart)/. The Duke’s friend Fernando (Jamie Thomas King) falls in love with Bianca who initially rejects him but then falls in love with him. Fernando is troubled with his betrayal of his friend the duke. The affair is NOT consummated but the two are found out. What revenge will be taken on the two lovers? That is the question that holds you in your seat to the end.

Needham plays the Duke as an erratic, weak, dictatorial and perhaps psychotic man. Stewart as Bianca is lovely, strong and passionate. She is just the opposite of her foolish husband and a delight to watch. King as Fernando is just the type of heroic lover you want to see – passionate but moral. 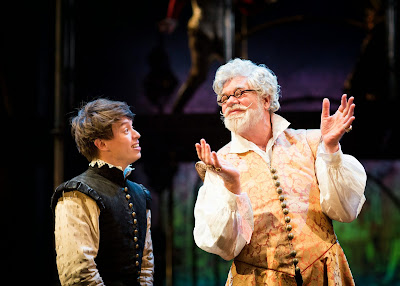 Matthew Kelly gets the juicy role of Mauricio, a foolish and conceited old courtier who is very funny in his idiotic conduct. Colin Ryan is his patient sidekick and is very entertaining.

D’Avolos, the secretary to the Duke, played expertly by Jonathan McGuinness, is a creepy schemer, the epitome of the evil man in revenge tragedy.

The nobleman Roseilli (Marcus Griffiths) is an interesting character. He is in love with the Duke’s sister Fiormonda (Beth Cordingly) and he disguises himself as a fool so he can be near her. He was banished from Pavy because of the advances he made to her. She is bad news and he is even worse in the end. A couple of interesting characters done well by the actors.

There are many turns to the plot. There are seventeen characters in the play not including guards, friars and nuns. It is a pot boiler that is worth seeing for its own virtues as well as an example of the drama that flourished during the reign of Charles I until the theatres were closed.
__________