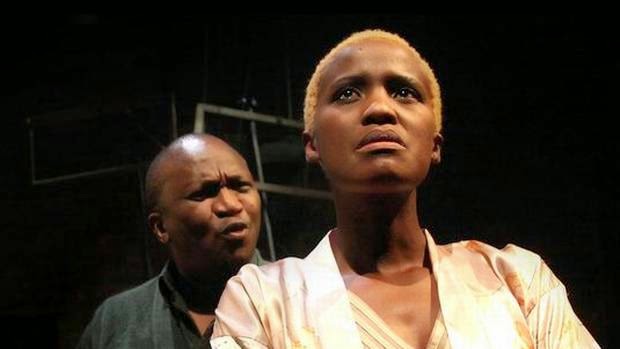 The first production is Athol Fugard’s 1959 play Nongogo in a production by Market Theatre and directed  by James Ngcobo.

The play is set in a shebeen, an unlicensed bar, in a township outside of Johannesburg.in the 1950s. The shebeen is owned by Queeny (Masasa Mbangeni) a former prostitute and a woman of strength. Blackie (Desmomd Dube), a hunchback who walks and acts like an ape, lives in the shebeen. Patrick (Hamilton Dhlamini) an alcoholic is a regular customer of the place. Sam (Pakamisa Zwedala), Queeny’s former pimp visits regularly and sells illegal liquor to her.

What we have are four misfits. A stranger comes into the shebeen in the person of a well-dressed and well-mannered table cloth salesman named Johnny (Nat Ramabulana). The energetic and ambitious Johnny acts as a catalyst to the plot. He develops a relationship with Queeny, the two establish a successful business but Sam becomes jealous. In the meantime Johnny insists on finding out Queeny’s background.

The play has some excellent performances. Mbangeni shows strength, determination and courage as she dreams of a better life with Johnny. But she is a woman with a past who had the fortitude to do what was necessary to survive and the resilience to get out of that profession when she could.

Ramabulana’s Johnny is a man with a troubled past as well who dream of a better life. He is imaginative, persistent and on the verge of having his entrepreneurial dreams bear fruit.

Zwedala’s Sam is tough, businesslike, jealous and in the end nothing more than the pimp he used to be. Dube is a very effective Blackie, the psychotic, deformed man who would make a fine enforcer anywhere.

Dhlamini’s Patrick is a pathetic drunkard whose wife is giving birth to his sixth child and he is so ineffectual that the only thing he can do is worry about the name he will give to his new son.

The plot of the play is somewhat obvious and doing the two acts in one hour and forty minutes without an intermission does not serve it well.

Set and costume designer Nadya Cohen makes use of the entire two-story stage of the Berkeley  Street Theatre Downstairs. The theatre has a forbidding brick wall at the back and the only props used are some tables and chairs as well as a cooking area. There is no sense that this is a small, unlicensed establishment selling liquor.

There is a significant change in the set between the unadorned Act I and Act II where yellow curtains, a table cloth and flowers are called for in the play’s stage directions.. In this production a yellow banner is hung from the ceiling adding nothing to the scene. There are no doors, there is no window and all is left to the imagination and the context of the play. This is unsatisfactory because it does not give any impression of the place where the action takes place.  Ngcobo has taken Fugard’s realistic play and changed it into something else. The actors are seated on the stage most of the time and the knocks on the door are indicated by banging on furniture. The production would have gained considerably if the director followed Fugard’s instructions.
_____