THE HARD PROBLEM – REVIEW OF STOPPARD PLAY AT THE NATIONAL THEATRE 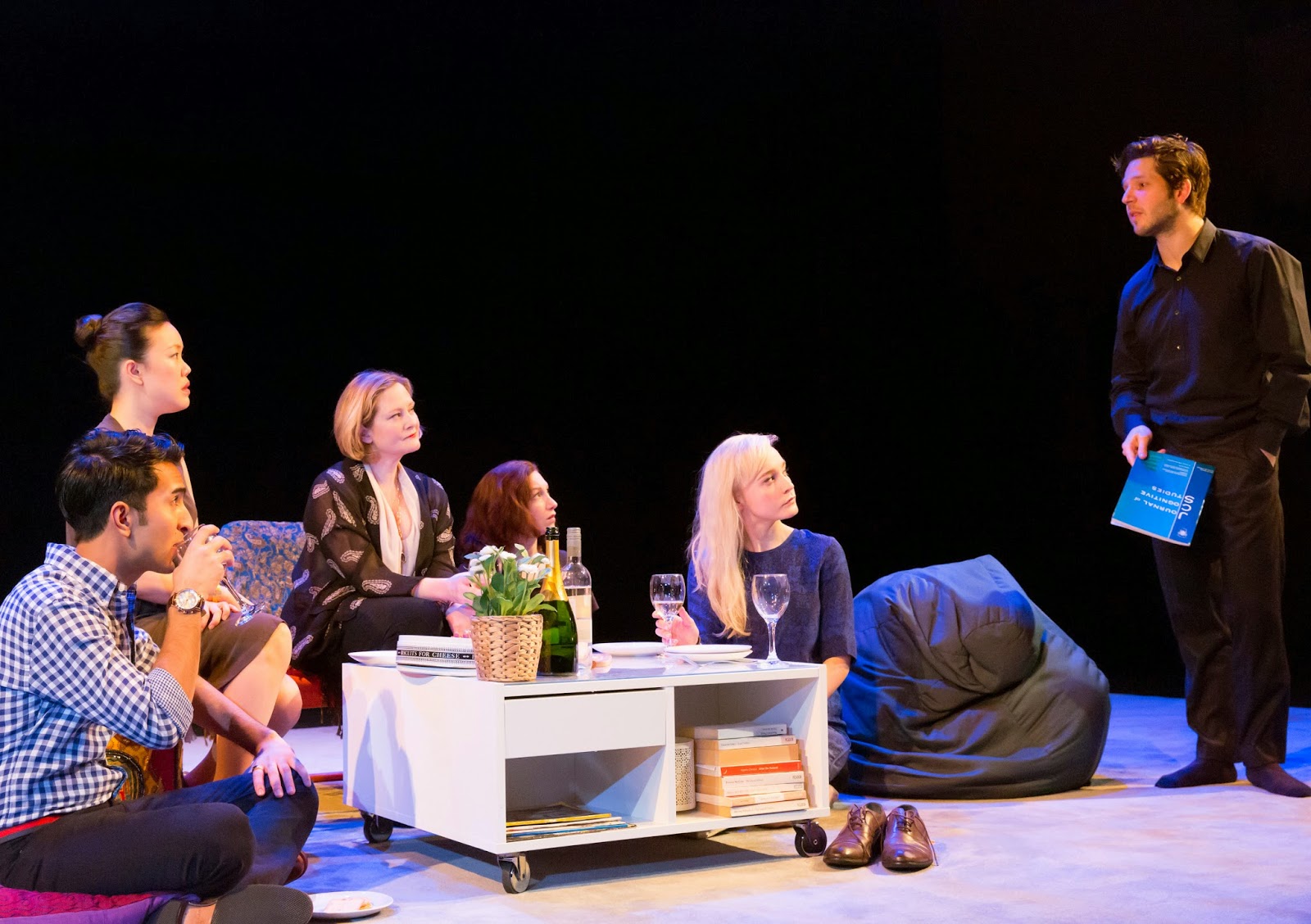 Tom Stoppard has provided more mental gymnastics and burned more cerebral calories than many playwrights put together. Since 1966 when Rosencrantz and Guildenstern Are Dead was produced, he has never failed to fascinate, entertain and intellectually challenge. The Hard Problem, his latest play, does all of those things and the mental exertions leave you exhausted, entertained and somewhat in the dark.

When the lights go on in the small Dorfman Theatre at the National Theatre in London, you see a jumble of cables overhead. They are lit in various circular shapes and they look like the nerves of the human brain. There are also vertical wires which are lit in a kaleidoscope of colours.

The mental exertion required by the play reminded me of the physical demands on the body of a reasonably healthy individual who has not run a few kilometers on a treadmill or used machines that promise to change his glutes, biceps, triceps, abs and other parts of his anatomy that he does not know that he has into muscular bundles of Herculean proportions.

A very attractive young woman named Hilary (Olivia Vinall) and a handsome young man named Spike (Daniel Molony) are discussing the subject of goodness or being good instead of hopping into the bed that is readily available.

She thinks that there is such a thing as good, altruism and doing an act of decency for its own sake. He argues that all of that is merely an evolutionary development that is simply self-serving. Good exists as a result of a cost-benefit analysis.

Now this is like getting on a treadmill and running at a leisurely pace. You understand and feel that it is doing something good for – all that panting and sweating – and your monthly donation to the gym seems justified.

Things get tougher. Hilary, the brilliant psychologist, prays to God and wants to do a study on something like Nature-Nurture Convergence in Egoistic and Altruistic something-or-other. What? You have gone to a machine that requires strength beyond your ability to muster and try to exercise something that you don’t even know you have and you move quickly away.

Hilary wants to be accepted by the Krohl Institute for Brain Science. Spike describes what the Institute does and you only understand the part about organic vegetables and free Pilates. Spike throws even mother love into the utility bin. What is left, if you understood Spike’s high fallutin’ lingo, is just a bunch of nerves or wires or whatever the brain is made up of that work like a fancy machine!?

By now you are drenched in perspiration, your heart is pounding and you are not sure what benefit you are deriving from all those fancy and exhausting exercises. Nevertheless, you want to continue in the hopes that bulging muscles are within reach.

But as far as Stoppard is concerned that is just the beginning. The hard question of what we are is partly belief or faith - belief that we are creatures that have evolved over millions of years into what we are and partly faith that there may be more than evolution or at the very least more than we can explain. Oh God or goodness!

Stoppard does not dwell on intellectual arguments alone. Hilary gave up her daughter for adoption when she gave birth to her at age 15. She is haunted by her memory and her prayers for a miracle are connected to her child.

Stoppard takes a few shots at the financial industry which is obsessed with numbers and logarithms and the use of which made Jerry Krohl (Anthony Calf), the financier of the Institute, a “squillionaire”. There are other scientists like Leo (Jonathan Cloy), Ursula (Lucy Robinson) and mathematicians Amal (Parth Takerar) and Bo (Vera Chok). The play is humanized by a domestic scene with Jerry and his daughter as well as the presence of Julia (Rosie Hilal) a school friend of Hilary’s and, unlike the intellectual superstars, a Pilates instructor.

Nicholas Hytner’s directing fits the tone of the play which is to say brilliant. Bob Crowley’s design is Spartan. A bed and a desk in the opening scene, a stark office, a kitchen table and a hotel bed make up the rest of the sets.

I saw The Hard Problem in a movie house in Toronto and it worked very well. The small stage transferred well onto the screen and we could have done even with fewer camera angles. The close-ups were of some utility but the Dorfman is such a small theatre that the benefit was limited.

The benefits of going to the gym or seeing plays by Stoppard deserve further consideration. With the former, you risk injury but may get the concomitant benefit of better health and longer life. If so you should consider the mental gymnastics provided by Stoppard as a possible aide to improving the health of the uppermost segment of the anatomy which may rarely be doing vigorous pushups.
_____

The Hard Problem by Tom Stoppard opened on January 28, 2015 and continues at the Dorfman Theatre, National Theatre, South Bank, London, England.  http://www.nationaltheatre.org.uk/ It was shown on April 16, 2015 at the Cineplex VIP Don Mills Shops at Don Mills, 12 Marie Labatte Road, Toronto Ontario M3C 0H9 and other theatres. It will be shown again on May 16, 2015 at various theatres. http://www.cineplex.com/Events/NationalTheatre
Posted by James Karas at 7:10 PM