BULL – REVIEW OF BARTLETT PLAY AT COAL MINE 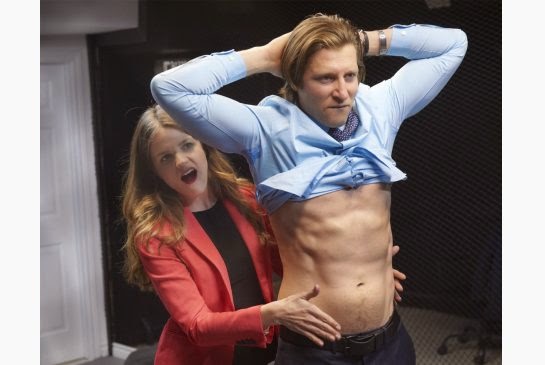 Bull is a new play by Mike Bartlett that provides the type of powerful examination of corporate morality with superb acting that one looks for in the theatre.

The play is produced by Coal Mine Theatre at The Coal Mine and if you have not heard of the company or the theatre it is because they are quite new. The theatre is in a basement on Danforth Avenue, in Toronto’s Greektown and this is the company’s second production.

As you enter the theatre, you see that the playing area is enclosed by a net. You expect to see a few bouts of the Ultimate Fighting Championship where brutality and bloodshed pass for a sport. Bull is the moral and office equivalent of a 55-minute UFC bout and the end is very similar to it.

The set is in fact an ordinary office where three employees are waiting for the boss to axe one of them. This is capitalism and to say it’s a dog-eat-dog world may be unduly offensive to canines. We have Tony (Damon Runyan), tall, handsome, arrogant, athletic, amoral and brutal. His partner in assassination is Isobel (Diana Bentley), tall, beautiful, confident, amoral and vicious.

These two UFC fighters have their victim in the arena and his demolition is inevitable. Tom who asks to be called Thomas (Ryan Rogerson) is short, chubby, ineffectual and a fighter who will eventually bang his hand on the boards to signal his utter surrender.

Isobel and Tony take jabs at Tom, push him around, humiliate him and indeed have fun in the knowledge of their eventual triumph. Tom does try to resist but his fighting skills are pathetically limited and he is constantly thrown off his feet.

Carter, the boss, (Mark Caven) arrives to deliver the verdict on who will be eliminated and, of course, he chooses Tom after adding further humiliation. He cannot even remember Tom’s name.

Tom attempts to save some shreds of dignity by engaging or trying to engage Isobel in a physical fight. This is UFC come to the theatre. The fight ends in true UFC style with blood being shed. In keeping with the title of the play, the fight between Isobel and Tom is given the indicia of a bullfight. The atmosphere and violence of the play make bullfights look civilized and I prefer the UFC image.

The cast gave some superlative acting. Caven as the superior boss, Runyan and Bentley as the astonishingly brutal fighters and Rogerson as the pathetic Tom make for fine theatre. David Ferry directs this marvelous production.

This is The Coal Mine’s second production. Their third production will be August Strindberg’s Creditors, adapted by David Grieg and directed by Rae Ellen Bodie. Creditors will run from April 17 to May 17, 2014 at the Coal Mine.
______