THE JEW OF MALTA – REVIEW OF ROYAL SHAKESPEARE COMPANY PRODUCTION 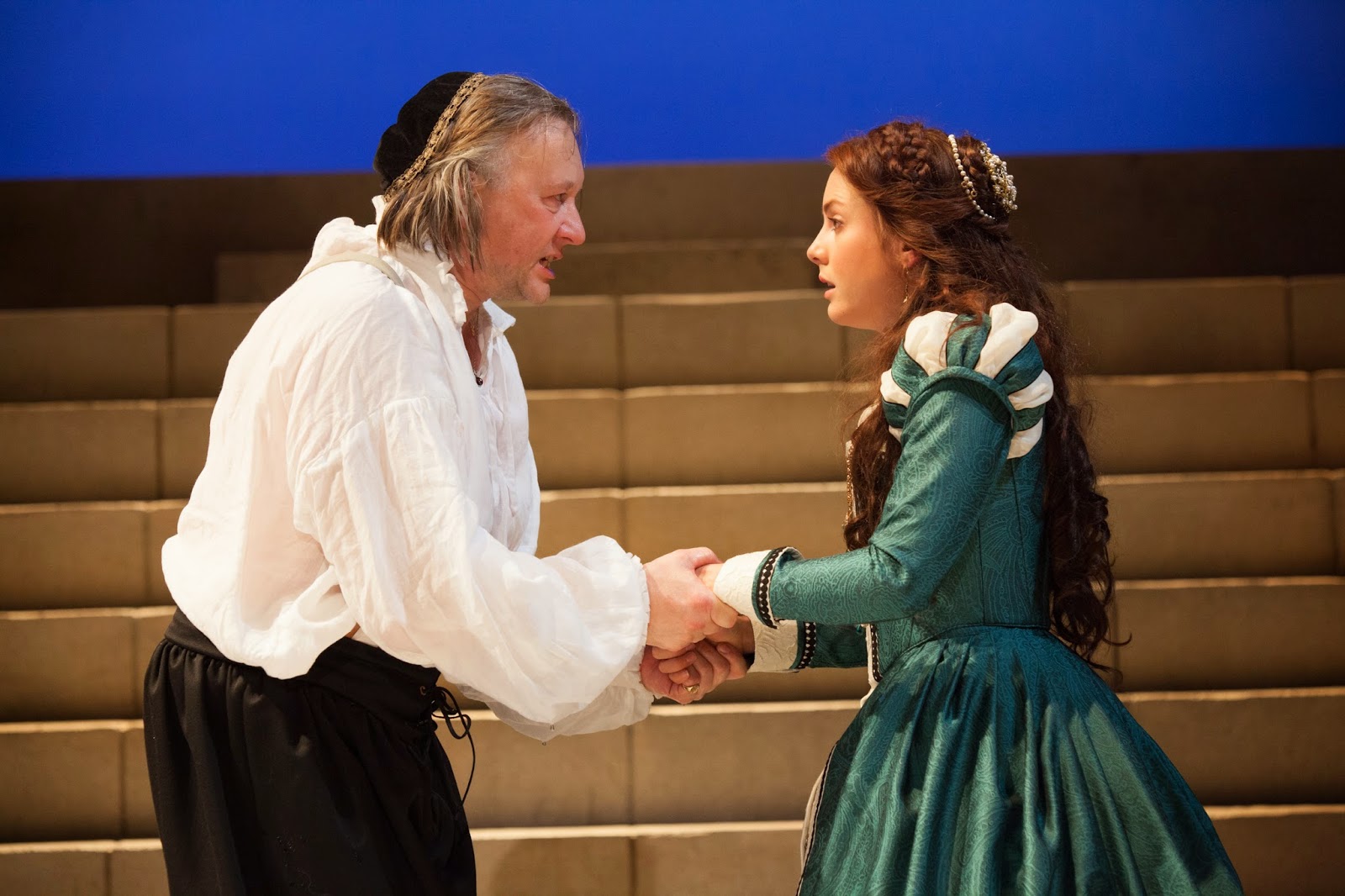 The Royal Shakespeare Company has produced a vibrant and engaging production of Christopher Marlowe’s The Jew of Malta. Director Justin Audibert paces the performance well and Lucy Cullingford who is credited with movement has indeed choreographed part of the performance to the energetic music of Jonathan Girling.

Audibert directs with a light and at times enthusiastic touch and the production has the feel of an action-packed play with a plot of many twists.

The Jew of the title is Barabas (Jasper Britton), a rich merchant in Malta during the siege of the island by the Turks. His property is confiscated by the Christian Governor Ferneze (Steven Pacey) in order to bribe the Turks. This sets in motion a series of intrigues, murders, poisonings, treacheries and blackmails to make your head spin.

The most notable performance is given by Britton in the lead role. Barabas is unscrupulous, devious, tough and murderous to be sure but he has panache as well. This puts him in a different class of villainy. He is not only shameless and amoral; he enjoys what he does and you find yourself almost rejoicing in his vengefulness. Examples? He hatches a plot to eliminate the governor’s son Don Lodowick (Andy Apollo) and his daughter Abigail (Catrin Stewart), her suitor Don Mathias (Colin Ryan) and a bunch of nuns and more. A superb job by Barabas as an avenger and by Britton as an actor.

The Anti-Semitism of the play is blatant but Marlowe is true to the word of Machiavel (Simon Hedger) who in the prologue states that “I count religion as but a childish toy.” Childish but toxic and murderous. Friar Bernadine (Geoffrey Freshwater) and Friar Jacomo (Matthew Kelly) are venal, selfish and hypocritical under the cowl. The two actors do a fine job in illustrating Machiavel’s view of religion.

The Turks do not come out any better. Calymath (Marcus Griffiths) and Callapine (Nav Sidhu) are representatives of the Ottoman Sultan in the style of rapacious and arrogant conquerors.

Governor Ferneze and his retinue are no better and no worse than the other Christians, the Muslims and the Jews. Lanre Malaou has considerable latitude to show his acting talent as the slave Ithamore and he takes advantage of every opportunity.

With the men occupying the center of evil and immorality, the women have less scope. Catrin Stewart is lovely and sympathetic as Abigail, Barabas’s daughter, but converting to Christianity because of her father’s evil may not resonate as well today as it did in Elizabethan England. Beth Cordingly makes a fine Bellamira, the courtesan and Matthew Needham is pimp Pilla-Borza to be reckoned with.

The set designed by Lily Arnold consists of marble steps behind the open area of the stage. A clunky trap door is useful for throwing people in jail or getting rid of dead bodies and there is a small fountain for baptisms at the front of the stage.

The light-handed, fast-paced approach adopted by Audibert works well and serves the play with its numerous plot twists and rather sketchy attention to characterization nicely. It is not a play that is frequently produced and this production is well worth the effort.
__________

The Jew of Malta by Christopher Marlowe runs until September 8, 2015 at the Swan Theatre, Waterside, Stratford-upon-Avon, England. www.rsc.org.uk
Posted by James Karas at 7:19 PM