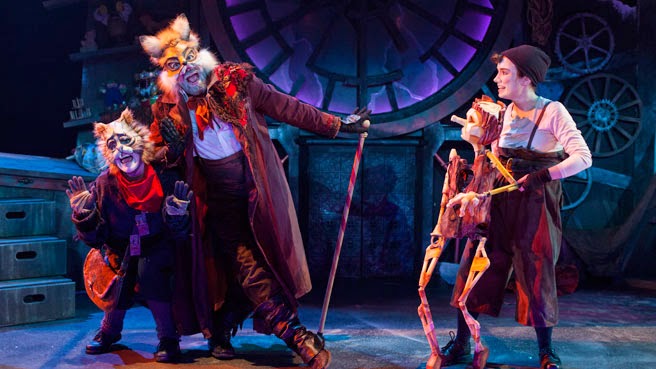 When you attend a Young People’s Theatre production you are likely to get two great shows for the price of one.

If you attend on a day when the theatre is full of primary school pupils representing a cross-section of Toronto and they like the show, you will be treated to such unbridled enthusiasm and joy that you can only admire and wish you could emulate.

The other show, of course, is what is on stage.

Hugo Bélanger has created (and directed) a show based on Carlo Collodi’s marvelous tale about the mischievous marionette Pinocchio.

Four actors play ten characters with energy, physical agility, limited vocal variety and just plain fun as the wooden marionette meets various characters from the moment of his creation until he develops into a human being. That is what is supposed to happen, in any event.

Krystal Descary as Pinocchio carries and manipulates the wooden puppet through his misadventures and she is good at it.

Milva Ménard moves and rolls on the floor as The Cat and entertains as Candlewick and The Blue Fairy. Claude Tremblay goes from Geppetto, the elderly carpenter who carves Pinocchio from a pine log, to the ever-present and wise Talking Cricket, the gruff Mangiafuoco and the aptly named Mischievous Boy.

Gabriel DeSantis-Caron plays the wily Fox and the Jolly Man.

The characters are colourful, achieve fast changes of costume and demeanor befitting the person that they represent. The single set is changed simply, quickly and effectively to indicate scene changes and it is a show that should have enthralled the school groups that attended the opening performance.

The show opens with Geppetto trying to straighten up the sign on the door to his carpentry shop. The sign keeps tilting from left to right. The audience finds this simple bit of business simply hilarious and they are led to expect more, much more comedy. It does not come. Except for a few giggles here and there, comic scenes are almost non-existent.. Did Bélanger intend this to be a serious retelling of the story?

Pinocchio’s signature characteristic – his nose growing when he lies – occurred only once or twice and it too failed to generate much merriment.

There is good didactic value in Pinocchio. Go to school, be honest, work hard, be decent – all are welcome lessons. But when a kid says he does not want to go school, the scene should be invested with humour. What kid would not recognize him/herself in the desire to play hookey now and then?

The play has to be funny, or scary or charming or all of those things. This Pinocchio does not achieve any of those characteristics in any appreciable quantity. There are some musical numbers sung indifferently and the Cat and the Fox are amusing but there is not sufficient quantity to make a truly enjoyable children’s theatre production..

Eventually the little tykes started fidgeting and when the actors took their bows the applause was polite. It should have been thunderous.

The play was written in French and we saw a translation by Bobby Theodore and I am not sure if that was the problem. The production is by a Quebec company called Tout à Trac in coproduction with Place des Arts and Tennessee Perfuming Arts Center.
______

Pinocchio by Hugo Bélanger based on the story by Carlo Collodi opened on March 3 and will play until March 21, 2015 at the Young People’s Theatre, 165 Front Street East, Toronto, Ontario. 416 862-2222. www.youngpeoplestheatre.ca
Posted by James Karas at 9:50 PM