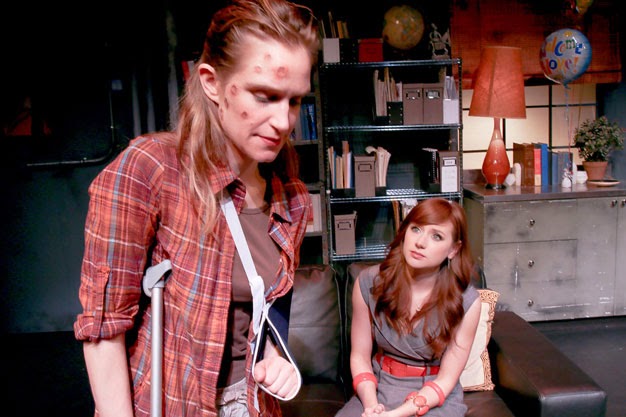 “I live off the suffering of others” is how a photographer who records the horrific lives and death of victims of the wars in the Middle East sums up her profession.

On another occasion she defends her photography as a necessary record of suffering, as a tool for making the world aware of the tragedy and effecting change.

Sarah (Kirstin Rae Hinton) was blown up and seriously injured by a road bomb while working as a photographer in the Middle East. James (Jason Jazrawy), her partner of some eight years and a journalist in the same area, returns to the U.S. after having a mental breakdown. When the play opens she is returning to Brooklyn on a crutch with serious injuries to her leg and arm.

The obverse side of Sarah and James is Richard (Sam Rosenthal), a photo editor for a magazine and his new love Mandy (Carleigh Beverly) who is young, pretty and a bimbo. Richard and Mandy face the horrors of war vicariously. They marry, have a child and will settle for middle class life.

James and Sarah also get married but she cannot accept life away from the scenes of death and mutilation. Is she photographing reality or is she rebelling against her rich father and his trust fund?

The issues that Margulies tackles are current, interesting and compelling and he intertwines them with the personal lives of his characters. The play has a sputtering beginning with pedestrian dialogue that does not go into high gear very quickly. Director Jordan Merkur seems content to let the plot drag for a while.

When the plot does get in gear we do get some impressive performances. Sarah is torn by feelings of guilt about the suffering that she witnesses and simply photographs. Some of the people that she uses for her job do not want to be photographed whatever her noble motives, real or imagined.

Jazrawy’s James is a man with a bad conscience about leaving Sarah behind and some jealousy at discovering that she had an affair and indeed fell in love with her interpreter.

Rosenthal as Richard is a true friend and supporter of Sarah and James and Mandy develops into a loving mother.

The play and the production have some compelling scenes but there were some occasions when the action flags for short periods. What was missing most on the night that I saw it was the magic link between stage and audience. It is something indescribable when it happens and unfortunate when there seems to be little reaction from the people watching.
______