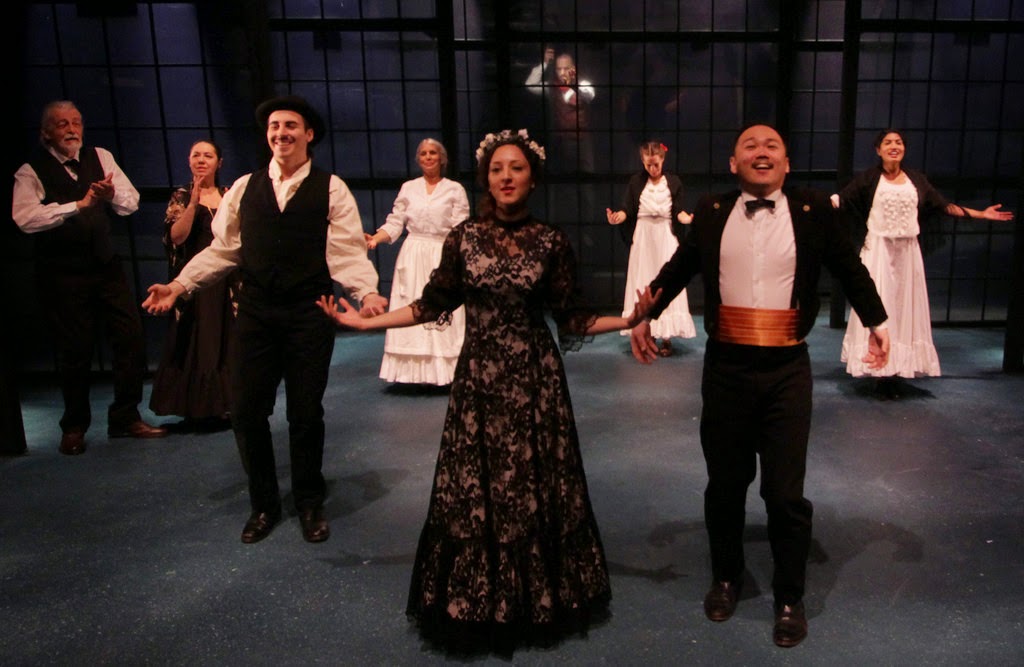 Federico Garcia Lorca’s Blood Wedding is a milepost in 20th century drama and director Soheil Parsa has taken the brave task of producing the play with his Modern Times Stage Company and Aluna Theatre. The result is a dramatic and interesting production that may have little to do with Lorca’s play.

Blood Wedding is a poetic play with overwhelming passion, dense images of blood and an inexorable march towards destruction and death. The problem is how to capture the poetry and the tragedy without descending to melodrama. Parsa makes some attempt but in the end the production misfires.

Given the choice between overacting and underacting, Parsa frequently chooses overacting. Instead of concentrating on Lorca’s poetry, the actors overemote, overuse their arms and torsos and the result is frequently and undesirably comic.

The play opens auspiciously. A woman is sleeping on a small bench and we hear the sound of horse’s hooves. She wakes up startled. The horse is a central image in the play which takes place in the desolate plains and hills of Spain. It is a traditional, almost primitive society where honour, virtue and old custom are essential elements.

The woman who wakes up is the Mother (Beatriz Pizano) of the Bridegroom (Derek Kwan). The characters do not have names except for Leonardo (Carlos Gonzales-Vio). The Bridegroom (who is ridiculously and misleadingly called Boy in the programme) wants to marry The Bride (Bahareh Yaraghi), a woman who had a relationship with Leonardo when she was fifteen years old. (She is a woman in her twenties and, again, in the programme is referred to as Girl).

Leonardo is married to his Wife (Sochi Fried) and has a son but he is still in love with The Bride. He will ride his horse the long distance to The Bridegroom’s wedding and run off with The Bride. The overpowering passion that leads these two people to break the moral code of their society will lead inevitably to tragedy and, of course, it does.

The play has all the elements of a melodrama and it is in fact based on a true story. But Lorca wrote poetry, not melodrama. There is richly textured imagery of blood, flowers, violent passions and death. The second scene of the play the dialogue between Leonardo’s wife and his mother is written mostly in evocative verse and there is poetry interspersed throughout the play. In fact the whole play should be viewed as a poem.

Pizano as the Mother is a woman who has seen tragedy in her life and is fearful of more misfortune in the future. Pizano looks too young for the role and her vigorous use of her arms betrays an energetic and at times comic woman instead of a tragic figure. She becomes almost a nagging mother instead of a woman of stature.

Kawn as The Bridegroom is a vigorous young man who is eager to marry The Bride. But there is no indication that he is a bit of water compared to Leonardo who is like a river. She runs off with Leonardo despite her better judgement, knowing fully well that it is wrong but she is simply unable to control her passion.

Yaraghi was a convincing Bride who carried her poetry well. She convinces us that she lost all sense of morality when she looked at Leonardo’s beauty.

Gonzalez-Vio makes a dark and brooding Leonardo. He is gruff, seething with passion and violence and a man who is possessed by his passion. He reminded me of Emily Bronte’s Heathcliff.

The set (designed by Trevor Schwellnus who is called a Scenographer in the programme) consists of a couple of benches with several panels of opaque glass. The yellow room of the first scene or the pink room of the second scene are not to be seen for easily forgivable reasons. But Lorca calls for a cross of large flowers. These can foretell a celebration such as a wedding or a funeral. Parsa and Schwellnus omit this and do nothing about giving the feel of a church in the final seen.

There are some strong performances in the production but Parsa’s overall vision of the play misses much of what Lorca put in it. Parsa’s conception may be described as idiosyncratic and personal but it is not Lorkaesque.

I should note that I saw the first preview of the production and there may be some changes before opening night on March 13, 2015.
___

Blood Wedding  by Federico Garcia Lorca in a production by Modern Times Stage Company and Aluna Theatre runs until March 29, 2015  at Buddies in Bad Times Theatre, 12 Alexander Street, Toronto, Ontario.  416 975-855
Posted by James Karas at 12:27 AM