TO KILL A MOCKINGBIRD – REVIEW OF YPT PRODUCTION 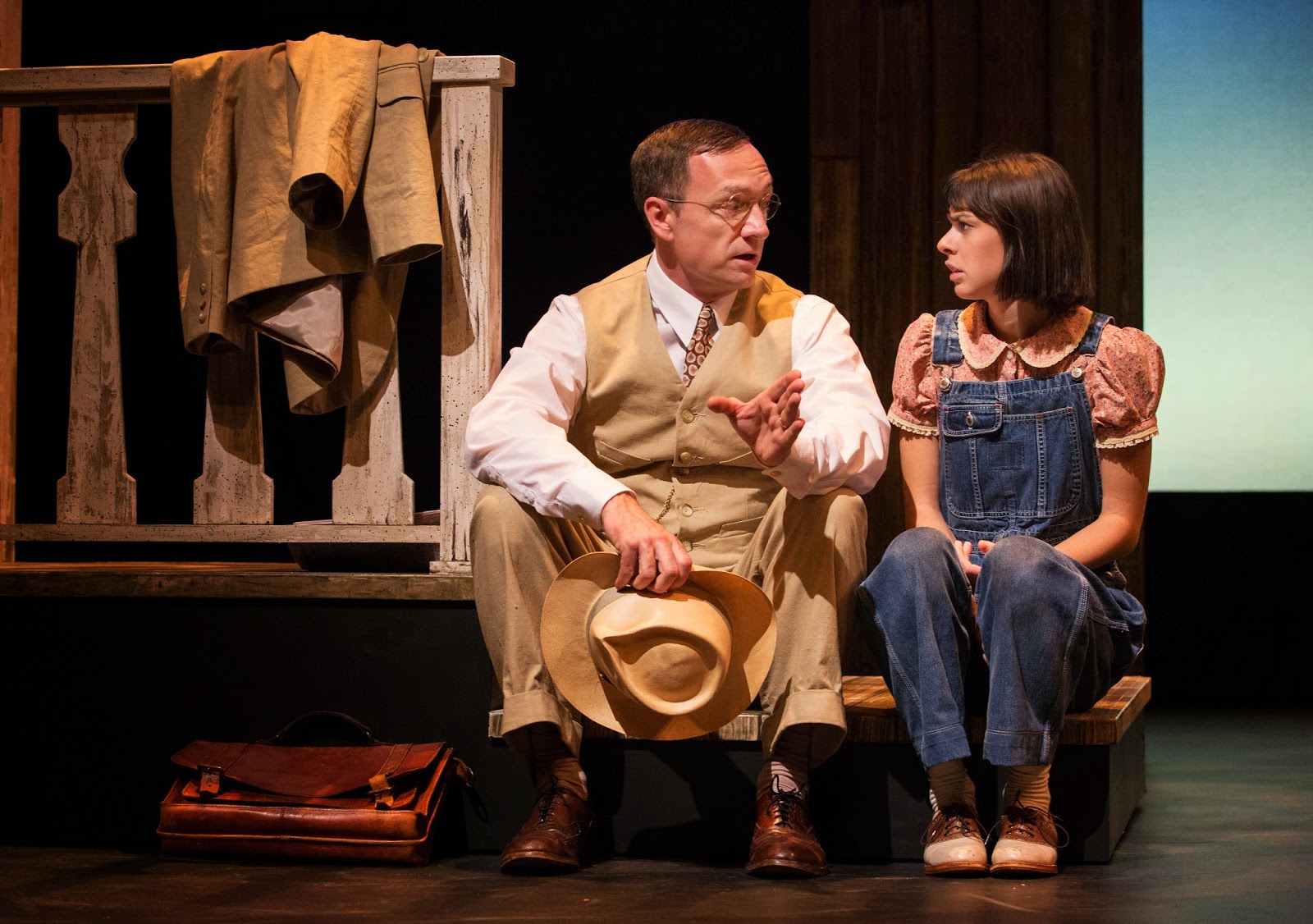 Jeff Miller as Atticus Finch and Caroline Toal as Scout in To Kill a Mockingbird.
Photo by Cylla von Tiedemann

Harper Lee’s To Kill A Mockingbird has attained iconic status as a novel, a film and a play. The 1960 novel and 1962 film starring Gregory Peck are known better than the 1990 theatrical adaptation by Christopher Sergel but all tell the powerful story of growing up in a small town in Alabama in the 1930’s and of racial inequality and injustice at the most despicable level.

Young People’s Theatre gives us an outstanding production of the play that captures the atmosphere of a town with deep racial bigotry and disregard for justice.

Director Allen MacInnis leads a fine cast who give very good performances that tell the two stories of the novel with effectiveness and emotional punch.

One plot strand is the domestic life of lawyer Atticus Finch (Jeff Miler), his two children, Scout (Caroline Toal) and Jem (Noah Spitzer), their friend Dill (Tal Shulman) and the maid Calpurnia (Lisa Berry). The children and Dill are intelligent, curious and have very active imaginations especially when it comes to their reclusive neighbour Boo Radley (Mark Crawford). Their curiosity leads them to harassing the poor man in order to see what he is doing and how he is living. It is a touching tale of childhood fears and of growing up.

The parallel story is about Tom Robinson (Matthew G. Brown), a Negro labourer charged with raping Mayella (Jessica Moss), a young woman who befriended him and made sexual advances. Her father Bob Ewell (Hume Baugh) saw the  incident and Tom was immediately arrested and charged with rape. Judge Taylor (Thomas Hauff) appoints Atticus to defend Tom and we have a memorable courtroom scene.

The two plot strands meet to very dramatic effect at the conclusion of the play. I am not disclosing the entire plot for those who may not be aware of it. Suffice it to see it is an extraordinary story that goes from the humour of childhood fears and domestic life to the depths and depravity of racist America and the perversion of justice.

The story is told from the point of view of the ten-year-old Scout but the central character is Atticus. He is the essence of decency in a society poisoned by racial hatred. His defense of a Negro transfers society’s hatred towards him when the disgusting Bob Ewell spits in his face. Atticus reacts calmly and expresses the wish that his attacker did not chew tobacco. That is the persona that Miller has to represent and he does so with terrific effectiveness.

Toal does a very good job as Scout. The actor is understandably older than the 10-year old Scout but she is convincing in the role. She manages a decent Southern accent and my only small complaint is that at times she spoke a bit too quickly.

Shulman and Spitzer are in good form as the young boys as is Rudy Webb as the decent Reverend Sykes and Hauff as the fair-minded judge.

The obnoxious and evil Bob Ewell and the pathetic Tom Robinson represent the opposite poles of the emotional scale. Brown as Robinson delivers an emotionally draining performance while you want to strangle Baugh’s Ewell he is so hideous.
The theatre on the media opening performance of this production was full of students representing the racial mix of Toronto. They seemed enthralled by the play that is as much a lesson in morality as it is a thoroughly dramatic story. It was a delight to watch the stage and the audience. The show is recommended for ages 11 and up but there is no upper age limit! Go see it.
______

To Kill A Mockingbird by Harper Lee, dramatized by Christopher Sergel opened on October 9 and will play until November 2, 2014 at the Young People’s Theatre, 165 Front Street East, Toronto, Ontario. 416 862-2222. www.youngpeoplestheatre.ca
Posted by James Karas at 11:05 AM