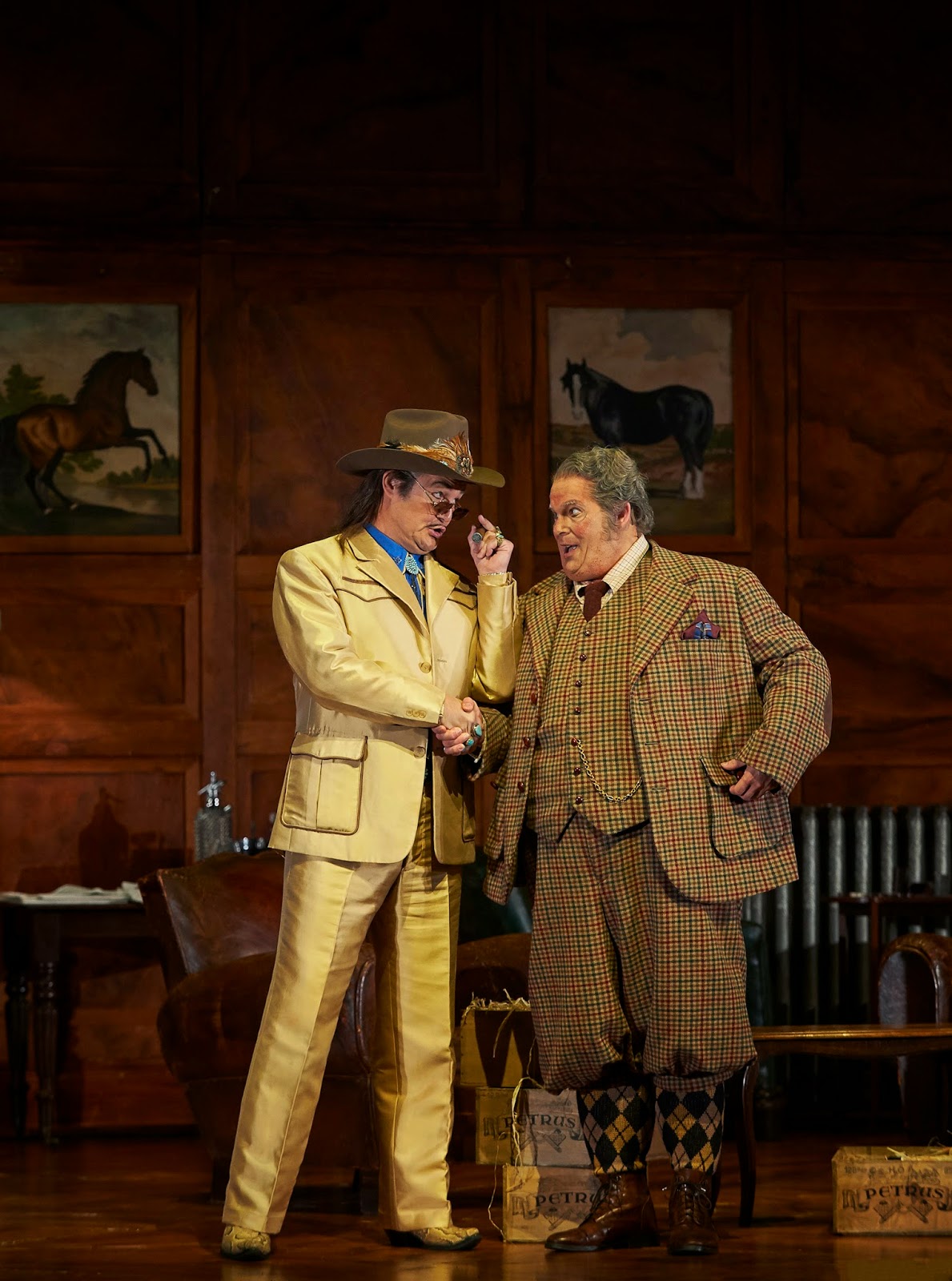 The Canadian Opera Company delivers a resoundingly successful Falstaff for its fall season. Gerald Finley dominates the production the way Herne’s Oak towers over Windsor Great Park (even if in this production the tree is left to our imagination).

The Canadian bass-baritone gives a defining performance as the exuberant, irreverent, lecherous fat knight in Robert Carsen’s brilliant imagining of Verdi’s last opera. There are times when he is the centerpiece of the opera around whom the other characters seem like simple satellites. He dominates vocally with his powerful chords and physically with his well-padded torso. He is funny and Carsen manages to keep him from becoming pathetic in the ends when the “fairies’ are supposed to basically torture him. The needling is ritualistic rather than realistic and the desired result is comic rather than cruel.

Canadian baritone Russell Braun gives a superb performance as Ford, the jealous, would-be-cuckolded husband of Alice. He disguises himself as a wealthy man in order to catch Falstaff, his supposed cuckolder and manages to be amusing in both guises. Braun sings with conviction and acts with panache. Soprano Lyne Fortin is an attractive, energetic and satisfying Alice.

French-Canadian Contralto Marie-Nicole Lemieux gave an impressive performance as Mistress Quickly, one of the merry wives of Windsor. She has a marvelously rich voice and a fine comic sense. Her Mistress Quickly was a delight to see and hear.

Tenor Michael Colvin did the best in the relatively minor role of Dr. Caius by being vocally expressive and quite funny. Tenor Frédéric Antoun was good as Fenton the young lover with Simone Osborne as Nannetta, the object of his affection.

Much of the strength of the production lies in Carsen’s interpretation. The Garter Inn where the opera is set in 16th century England (i.e. Shakespearean’s The Merry Wives of Windsor) becomes a modern grand hotel. Falstaff is in a huge bed in a paneled room that is as big as the stage. With a few judicious rearrangements of the panels we move to the other scenes of the opera. The panels are removed for the scene in the kitchen in Ford’s house where Falstaff will be hidden in a huge laundry hamper and unceremoniously dumped into the Thames.

After being saved from drowning by the size of his belly, Falstaff ends up in the stable of the grand hotel where a horse is having dinner while our hero tries to deal with his humiliation.

Falstaff opens at a brisk speed and the tempo is maintained with necessary modulations in pace. Carsen brings out comic touches and gets the laughs and enjoyment inherent in the opera. The last scene in the park where Falstaff’s punishment could become disproportionate to his sins is handled with finesse. In the end his atonement rings false as it should. We want an irrepressible Falstaff who gets his comeuppance but is essentially unstoppable and immortal.

The Canadian Opera Company Orchestra performed energetically under the baton of Johannes debus.

This is a co-production with the Royal Opera House, Covent Garden, thr Teatro alla Scala, Milan, the Metropolitan Opera, New York and the Dutch National Opera. That may be a good indicator of the current state of opera.

Be that as it may, the audience gave this Falstaff an enthusiastic reception and Gerald Finley a standing ovation.
_____


Falstaff by Giuseppe Verdi will be performed seven times between October 3 and November 1, 2014 at The Four Seasons Centre for the Performing Arts, 145 Queen St. West, Toronto, Ontario. www.coc.ca.
Posted by James Karas at 1:46 AM