MACBETH - REVIEW OF LIVE IN HD FROM THE MET PRODUCTION 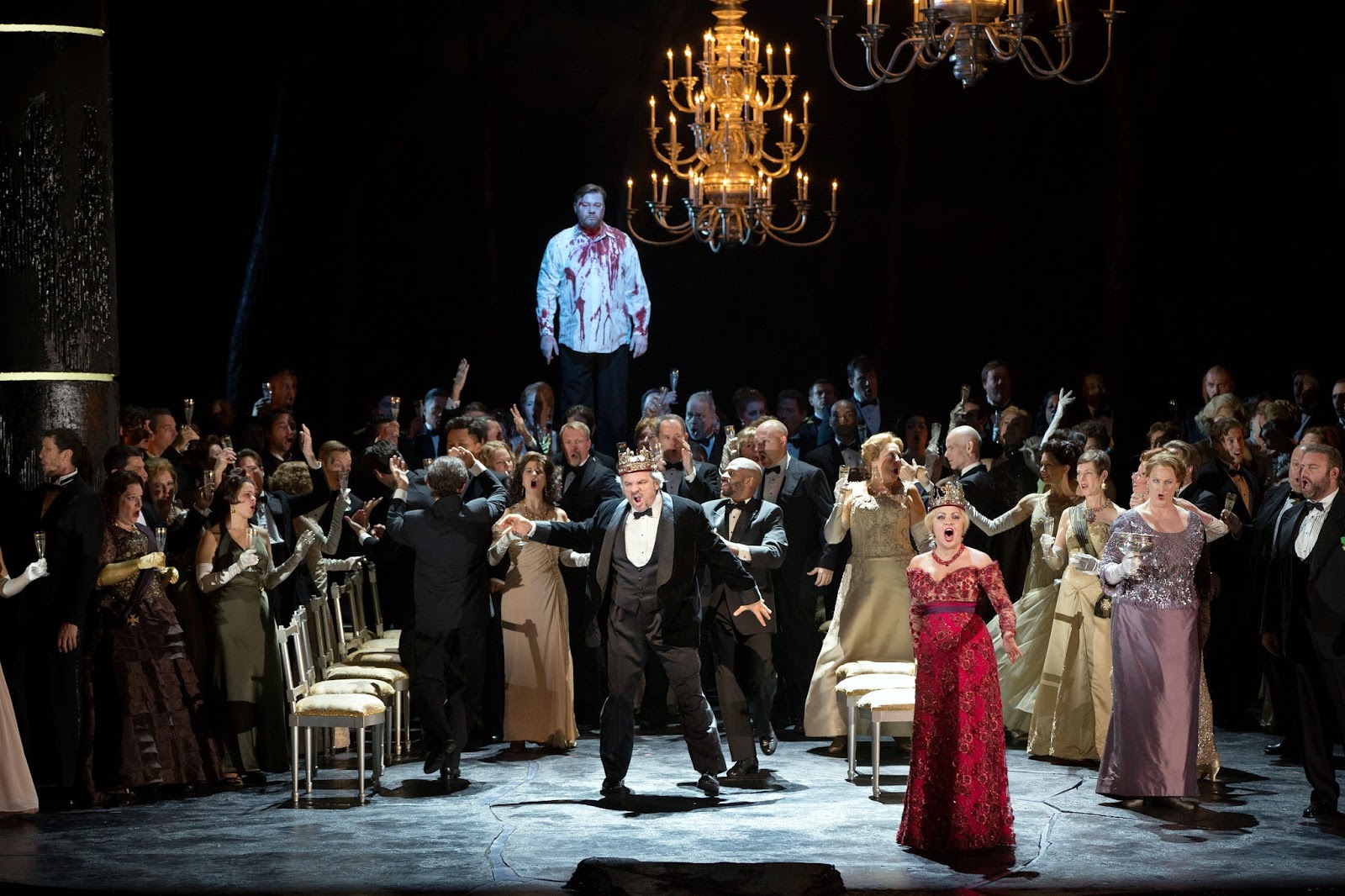 The Metropolitan Opera’s ninth season of broadcasting productions from New York to cinemas around the world is under way with an exceptional revival of Adrian Noble’s staging of Macbeth. The production is dramatically intense with a triumphal finish and a fine twist in the final tableau.

The first-rate cast is dominated by the plush voice and extraordinary beauty of Anna Netrerbko as Lady Macbeth. This Lady Macbeth dominates her husband by the force of her character and the magnitude of her ambition without histrionics or overt pressure. Her physical appearance and vocal prowess establish and maintain her authority right to the end. Her Mad Scene is a model of restraint and controlled drama. The drama comes from within and not from any overt melodramatic movements. What a performance.

Baritone Željko Lučić is the ideal husband and foil for this Lady Macbeth. He appears older than her and although he falls in for her ambition, it seems as if it is not entirely in his nature. Even after he commits horrendous crimes, we never grow to hate him completely. Lučić has a wonderful voice, on the lighter side of the baritone scale, thus giving him a more humane and less threatening persona.

Bass René Pape and tenor Joseph Calleja play Banquo and Macduff respectively. They are both victims of Macbeth with Banquo being assassinated because the witches predicted that his children will inherit the throne and Macduff’s family being eliminated as a precaution. They sing impeccably. 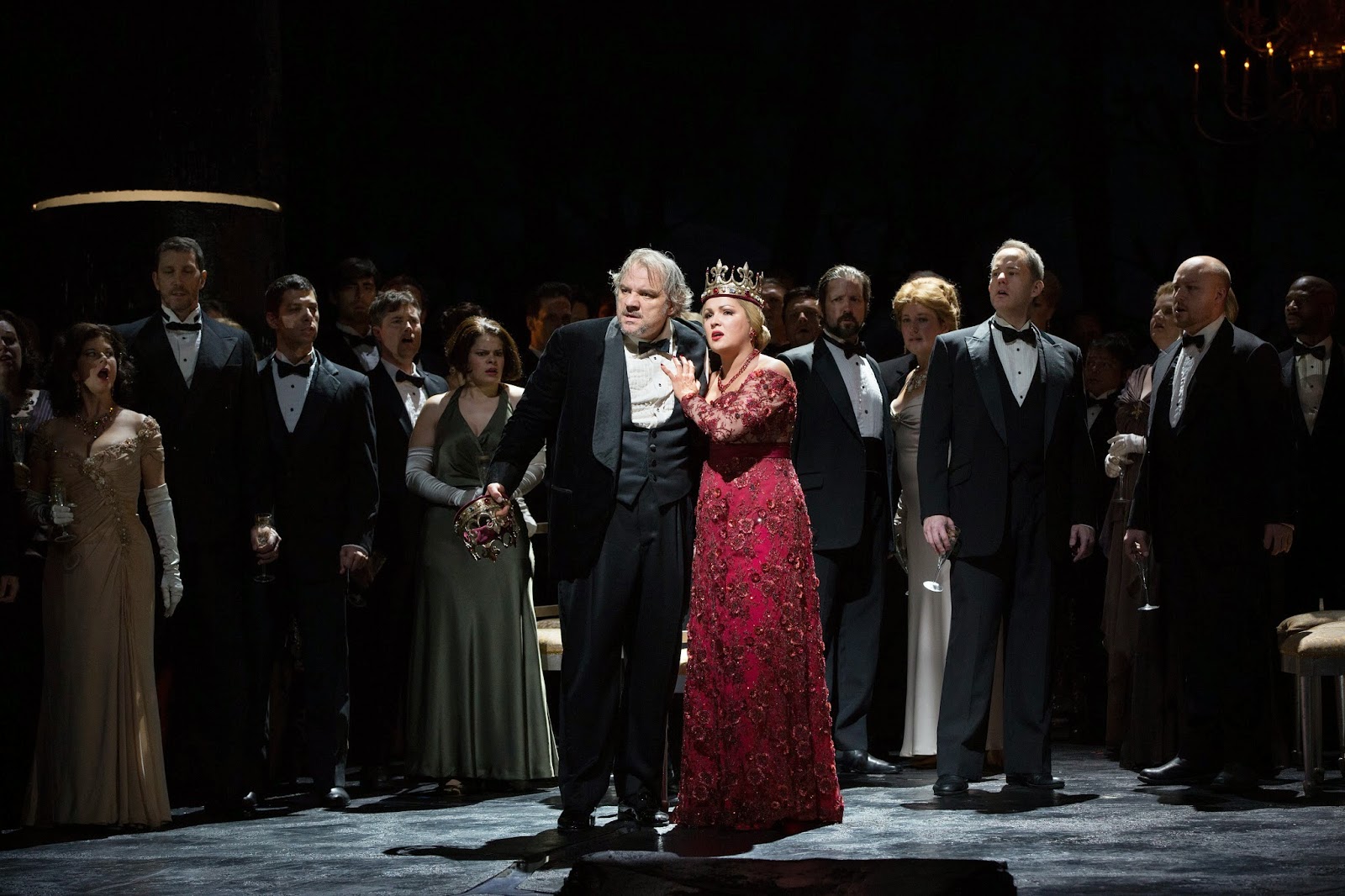 Verdi increases the number of Shakespeare’s witches into the dozens giving himself the opportunity to compose some outstanding choruses. The Metropolitan Opera Chorus looked like a bunch of bag ladies and the children looked like ragamuffins but all to good effect. The bag ladies carried purses which shone a light on their faces when opened. That is how they can foretell the future, I suppose, but they also sang marvelously.

Noble and Set and Costume Designer Mark Thompson deliver a dark and brooding production in modern dress with no attempt at realistic sets. The set is dominated by huge black columns that resemble tree trunks with rings of light. There are also leafless trees and for many stretches we see only a dark background. Much of the performance is done in a spotlight with red as the contrasting colour to the darkness. Blood is a dominant image of the opera, of course, with Macbeth emerging covered in blood after the murder of the king. Banquo and Lady Macbeth also appear covered in blood.

The staging is highly effective with numerous brilliant directorial touches. King Duncan’s bed can be seen on the stage between the columns. After the murder, his slit throat on the blood-spattered bed is revealed in an intensely dramatic scene.

The Met Orchestra is conducted with vigour and intensity by Fabio Luisi.

You will recall that the witches predict that Banquo’s descendants will occupy the throne of Scotland. We see Banquo and his son Fleance (Moritz Linn), the latter wearing a bright red scarf, leave the palace followed by Macbeth’s henchmen with orders to kill them. They kill Banquo but Fleance escapes.

At the end of the opera, order is restored with the crowning of Malcolm (Noah Baetge), the son of the murdered king. As the newly crowned king rises, he glances to his left and sees the boy in the red scarf. Is this the restoration of order or simply a prelude to the next battle for the Scottish crow? Marvelous touch.
___________