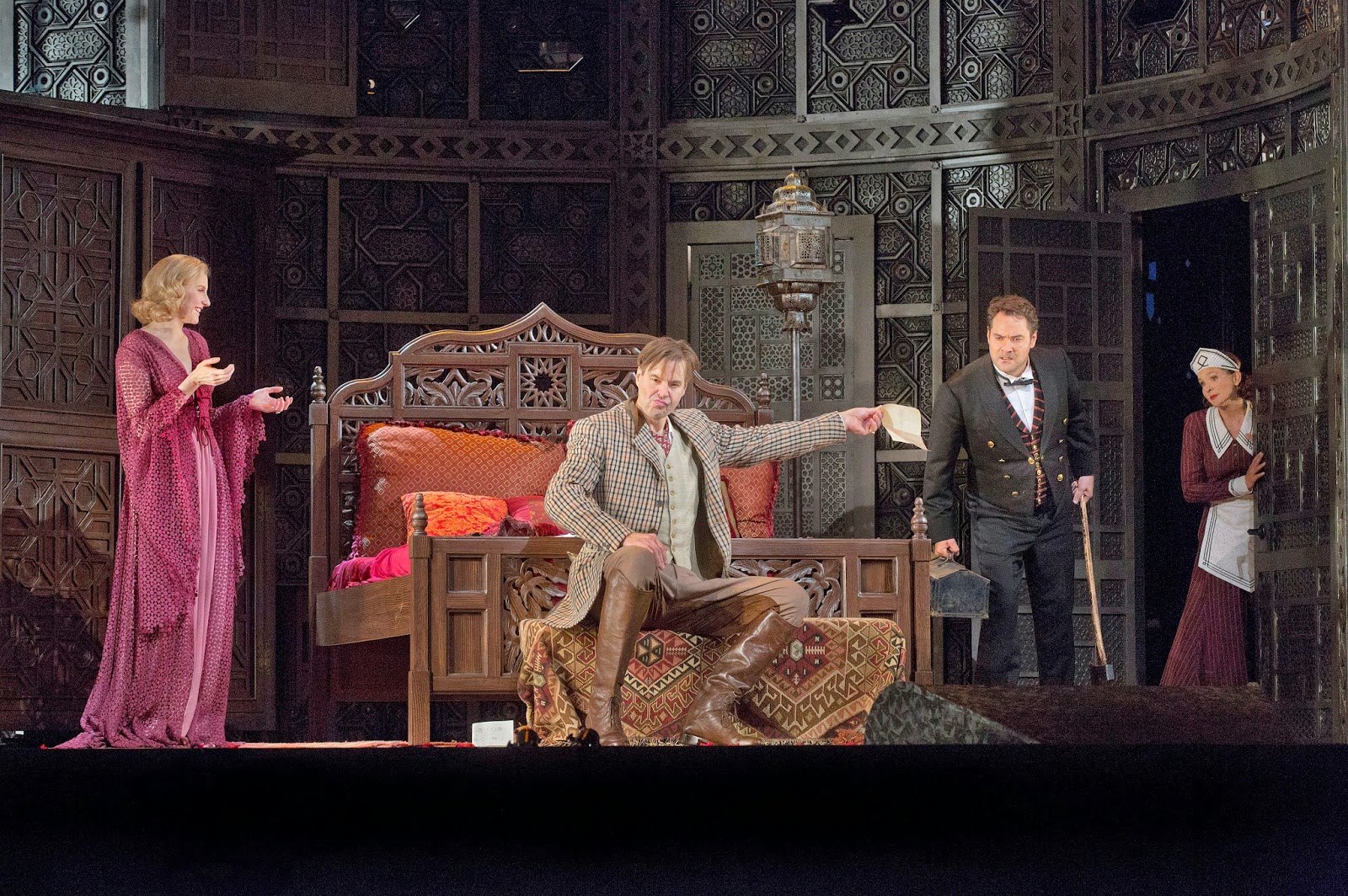 The current production of Le Nozze de Figaro at the Metropolitan Opera that was broadcast from Lincoln Centre Live in HD may be one of the best ever as seen on the big screen. Director Richard Eyre and Set and Costume Designer Rob Howell have conceived and executed an extraordinary staging that is a delight to the ear, a pleasure to the eye and that is very funny as well.

As the breathless overture to the opera begins and the gold curtain opens, we see a young women wearing only a slip and clutching her bra to her chest running onto and then off the stage. A self-satisfied man in his shorts and robe saunters after her. He looks very happy for obvious reasons. The man is Count Almaviva (Peter Mattei).

The massive and ornate stage of the Met revolves and we see a woman in a large bed. She is not sleeping and she reaches over to the other side of her bed. It is empty. The woman is the Countess Almaviva (Amanda Majeski) and we know why her bed is empty.

All of this happens during the overture and we get a panoramic view of the plot of the opera and then some. We are aware that the Count is tired of his wife and has developed a roving eye but we never “see” him being unfaithful nor do we see the Countess in bed alone while he practicing the delicate art of infidelity. In this production we get a good glimpse.

What follows is even better. Eyre has set the production in the 1930’s. The revolving stage is made of ornately carved wood and gives the impression of wealth and elegance with gothic overtones. He directs the cast with meticulous care and in the movie theatre we are at a great advantage for a change. We see every gesture, grimace, double-take, slap and comic business that most people in the audience at Lincoln Centre will probably miss. This comic opera is actually very funny and I found myself laughing loudly far more frequently than I can recall.

The singing and the acting and hence the characterizations were simply outstanding. Take Abdrazakov as Figaro. He is attractive, agile, sings gorgeously and gives us a full-blooded Figaro. Marlis Petersen is a pretty, smart, quick-witted, lively and simply marvelous as Susanna. 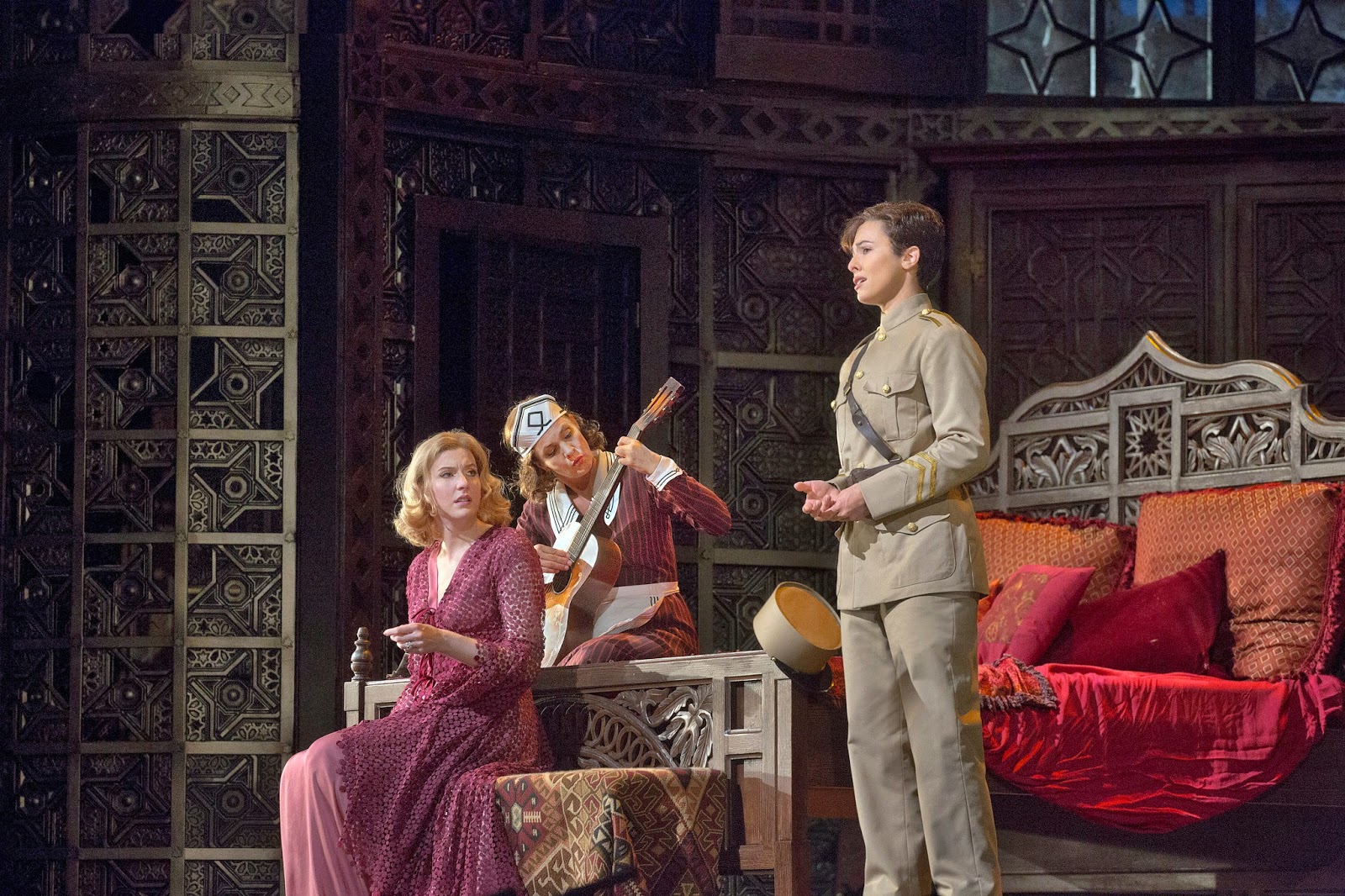 Majeski’s Countess is icily pretty, past the blush of youth and one cans see (perhaps) why the Count has strayed. But she gains our sympathy with two great arias and the fact that she is, as she tells us, much kinder than the count. A superb performance.

Mezzo-soprano Isabel Leonard deserves special mention for her portrayal of hormonally overloaded Cherubino. In addition to her fine display of sexual excitement, Leonard has a rich array of facial expressions, physical movements and vocal intonations that add up to a delightful Cherubino.
Mattei’s Almaviva is irascible, jealous, and almost obnoxious but he redeems himself when he asks for forgiveness at the end of the opera. After the anger, commotion, threats and disarray, there is a momentary pause and his aria of repentance comes out like a hymn of grace.

James Levine celebrated the 75th time that he has conducted Figaro and it is unlikely that there is a conductor who knows the score more intimately. He and Eyre have created a production that may serve the Met for decades.

A word about Gary Halvorson. He is the Live in HD Director who decides on the shots and angles that we see in the movie theatres. I have had nothing but contempt for his work because he seems to think that the Met is broadcasting video games. For this production he allowed us to see and hear without constantly clicking on different shots. We saw the large stage only a few times and I am not sure what the production would like at Lincoln Centre. In the movie theatre, it looked great.
____

Le Nozze di Figaro by W A. Mozart was shown Live in HD from the Metropolitan Opera on October 18, 2014 at the Cineplex Odeon Eglinton Town Centre Cinema, 22 Lebovic Avenue, Toronto, Ontario and other theatres. Encores will be shown on December 6 and 15, 2014. For more information: 416)-752-4494 www.cineplex.com/events.
Posted by James Karas at 6:00 PM