THE WIZARD OF OZ - REVIEW OF ROSS PETTY’S MUSICAL SPECTACLE

The whole world knows that Dorothy is from Toronto, fake news that she is from Kansas to the contrary. When the hurricane blows her to the Land of Oz she craves to come home. When asked why, she replies that Toronto has some very nice things unlike all other cities in the world. For 23 years Ross Petty has produced twisted versions of famous tales like Cinderella, Sleeping Beauty, A Christmas Carol and Peter Pan to the sheer delight of audiences. This year it’s The Wizard of Oz, A Toto-ly Twisted Family Musical.

The musical is “inspired” by L. Frank Baum’s The Wonderful Wizard of Oz, but you might as well erase all memories of the 1939 MGM movie with Judy Garland. There is no “Somewhere Over the Rainbow” or any of the familiar tunes in this wacky burlesque of the classic story. 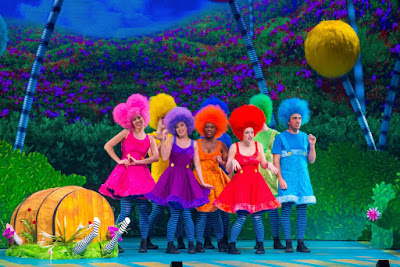 
For rural Kansas, we have the Ossington Summer Street Festival with the CN Tower in the background. The residents are worried that Miss Gulch (Sara-Jeanne Hosie) who owns the street will hike their rents through the roof. Miss Gulch, dressed in black, arrives on her bicycle, and you hear a thunderous and spontaneous chorus of boos from the audience. Now you know you are in Petty country.

The basic plot is sort of kept. Dorothy (Camille Eanga-Selenge) is blown by the hurricane to the Land of Oz where there is a wicked witch called Sulphura (Ms Hosie, of course). There is the good witch, Miss Sugarbum (Michael de Rose) and the Tin Man (Eric Craig), the Scarecrow (Matt Nethersole) and the Cowardly Lion (Daniel Williston).

How does the show succeed so marvelously? It has some brisk dancing, wonderful singing, plenty of humour, colourful scenery, political satire and infectious, enthusiastic audience participation. All of these virtues equal the creation of energy and enjoyment.

Political satire? You are invited by Melania for dinner at the White House. What present do you bring? How about a speech by Michelle Obama.

“How did someone so unqualified rise to power so quickly?” Reply: “Fox News.” The pre-teens in the audience were getting these jokes even if they were intended for their parents. And a comment about millennials who go back to live with their parents

Dorothy and her friends are environmentally conscious and there are numerous references to the ozone layer and care of the environment. The young are encouraged to get involved and in fact Dorothy decides to run for City Council and become fearlessly political.

The “serious” stuff is included without slowing down the singing, dancing and humour of the play.

As usual Petty includes commercials during the performance but even they are done with humour and panache.

The performances were vivacious and well-paced. Michael de Rose stood out as Miss Sugarbum in drag in an outrageous costume. Eddie Glen, a natural comedian, played Miss Gulch’s assistant Randy, Mr. Green and the Wizard all with pleasant results. Camille Eanga-Selenge shone as Dorothy being able to sing, dance and generally perform with superb bravura. 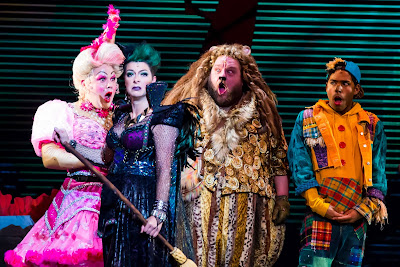 I was accompanied by two astute Associate Reviewers, John and Jordana.

John, 14, thoroughly enjoyed the show but was surprised by the numerous political jokes which were funny but perhaps a bit over the top. He was not expecting to see a picture of Doug Ford being sucked into the tornado but he found it funny.

He was impressed by the comments about global warming which were entertaining but also teaching kids about how serious climate change really is. Very educational.

Jordana, 11, did not mince her words. She judged this Wizard of Oz “a great play” and thought that it was funny and light at the same time. The political jokes stood out for her and she found them funny but thought that they had a deeper meaning as well.

This review appeared in the December 21, 2018 edition of The Greek Press. www.greekpress.ca/