THE MADNESS OF GEORGE III – REVIEW OF NATIONAL THEATRE TELECAST

The National Theatre has broadcast a production of Alan Bennett’s The Madness of George III from the Nottingham Playhouse. Mark Gatiss gives an unforgettable performance as the king who goes from arrogance and royal privilege to mental illness and humiliation at the hands of people who normally quaked in his presence.

Bennett’s 1991 play deals with the question of royal power, the replacement of a king who has gone bonkers, political ambition, intrigue, treachery and medical treatment for madness in the 18th century more correctly described as quackery. The central part of the play however deals with the human story of King George III who descends into hell and eventually recovers after a great deal of horrendous treatment. 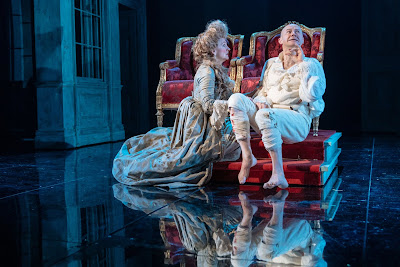 Debra Gillett as Queen Charlotte and Mark Gatiss as George III at Nottingham Playhouse.
Photograph: Manuel Harlan
Mark Gatiss as King George is on the stage more than anyone else. He dominates the production. We see Gatiss express entitlement and power over people but also humanity when he forgives a woman who attempts to assassinate him and we see him as a husband in bed with Queen Charlotte (Debra Gillett) where they address each other as Mr. King and Mrs. King.

Gatiss then gives us the mad king. His head bobbles, he babbles, he puts a finger in his mouth, screams in pain, begs for mercy and prays for death. Gatiss gives a sensational performance that takes one back to the ancient phrase of inspiring pity and fear.

On the political level we have Prime Minister William Pitt played unerringly by Nicholas Bishop as a dour, ascetic (except for drinking) man, a faithful servant and a good statesman. He is opposed by the ambitious and wily Charles Fox (Amanda Hadingue) who, with his cabal, wants the Prince of Wales (Wilf Scolding) to be appointed regent. The prize is appointments to important posts. The Prince of Wales is a vacuous, shallow and determined man who wants to rule and is prepared to conspire against his father. Thurlow (David Hounslow) is the opportunistic and treacherous Chancellor of the Exchequer.

One of the most striking aspect of the play that is done superbly in the production is the conduct of the “doctors.’ They represent an unbelievable array of ignorance, quackery, egotism and to a frightful extent lack of humanity.

Sir Lucas Pepys (Amanda Hadingue) believes in examining feces very closely and carefully as indicators of health or lack thereof. He duly displays the king’s…well, you get the idea. He prefers to approach his patient “from the other direction” and the more stool the merrier.

Sir George Baker (Stephanie Jacob) is a pulse doctor who is happy when the patient has a steady pulse and that is a good time to give him more medication. The effect, let alone the efficacy, of the medication is at best a guess.

Dr Warren (Louise Jameson) applies hot glasses to the king’s legs and head which create blisters. The application is extremely painful and the wounds are left festering so that the patient’s poison will flow out. 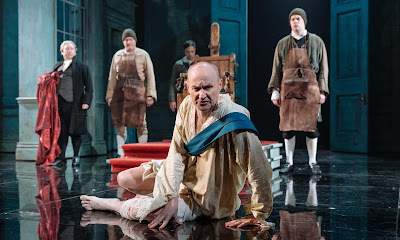 Mark Gatiss, centre, with Adrian Scarborough, David Hounslow, Andrew Joshi and Harry Kershaw in
The Madness of George III. Photograph: Manuel Harlan
Dr. Willis (Adrian Scarborough) is a cleric-turned-psychologist who believes in talking to the king but his real aim is to break his spirit. He restrains the king with straightjackets in a pretty brutal manner, separates him from the queen and considers himself an expert in curing mental illness.

This is only a partial list of the remedies applied to King George.

Director Adam Penford does superb work and I found it curious that he cast some women playing male roles. Nadia Albina plays Fitzroy, Amanda Hadingue plays Fox and Pepys, Stephanie Jacob plays Baker and Sheridan, Louise Jameson plays Warren and Jessica Temple plays Papandiek. The women did fine work in the roles and I almost forgot that the male roles are done by them. But why? We have seen Hamlet, King Lear and many roles played by women and very effectively. But what is the point of a woman playing Charles Fox?.
The set by Robert Jones consists of panels that represent walls and doors on the small, revolving Nottingham Playhouse stage. There are numerous scene changes and the set facilitated ease of scene changes from different palaces, to the bedroom to parliament. The stage seemed too small for the world of the play especially as seen in detail on the large screen.
The benefit of seeing the performance in a movie house was the details provided by the close-ups but there is the attendant loss of seeing the whole stage all the time.
In the end it was an outstanding production of a wonderful play that has lost none of its power and relevance some twenty seven years after it premiered.
__________
The Madness of George III by Alan Bennett was performed at the Nottingham Playhouse, England and transmitted on December 20, 2018 at select Cineplex cinemas across Canada.  For more information: www.cineplex.com/events
Posted by James Karas at 4:25 PM