This is a great production of a great play.

Last year the Chichester Festival produced King Lear with Ian McKellen in the title role. The production transferred from the 300-seat Minerva Theatre in Chichester to the somewhat bigger Duke of York’s in London and was broadcast around the world through the auspices of the National Theatre.

Director Jonathan Munby has opted for an intimate look at the play partly no doubt because of the size of the Minerva Theatre in Chichester. He has made numerous brilliant decisions in the presentation of the play and with Ian McKellen as Lear, it can be ranked as a great production.

Ian McKellen gives a performance that stands at the pinnacle of acting and actors who have dared take on the role. King Lear is four score and more and McKellen at 79 is almost the same age. He looks old and we have no doubt about Lear’s physical and mental frailties. We do not doubt the stupidity of dividing his kingdom into three and then into two parts so he can retire. But after that McKellen’s portrayal gives us a sympathetic man despite his faults. 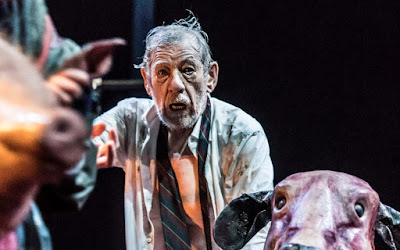 With his extraordinarily deep voice, McKellen delivers every iamb with perfect enunciation, timing and resonance. He pauses when necessary and can reach emotional depths that make you feel as if you are hearing Lear’s lines for the first time.

He gives a nuanced, meticulous and simply great performance.

Munby does some marvelous things with the nasty sisters. Goneril is a business-like creep, dressed conservatively. Regan is a conspicuously sexy, wearing clothes that reveal her sensual appeal. She is conspicuously evil as well. When her husband is gouging Gloucester’s eyes out she does an orgiastic dance. You feel that she is sexually aroused by an act of incredible cruelty and depravity.

Munby stages the blinding scene in a slaughter house where carcasses hang and we see the head of a bull and a pig. Very graphic and highly effective.

Lloyd Hutchinson is an effective Fool and Munby provides an interesting answer to the question of what happens to the fool. He seems to drop out of the action but Munby gives us a clear answer which you may be interested in seeing for yourself. Spoiler alert, in other words.

Munby casts Sinead Cusack as Kent and the change in gender in the hands of a superb actor works quite well. She puts on a hat and man’s clothing for a quick transformation and all she has to do is take off her hat to reveal that she is a woman. 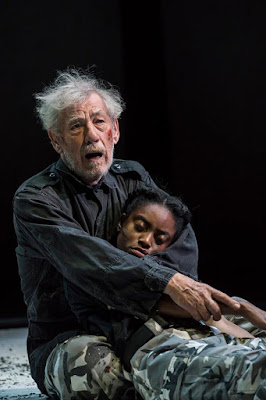 Ian McKellen and Anita-Joy Uwajeh
Danny Webb is superb as Gloucester, the man who brags about his adultery and illegitimate son in the opening scene and ends up being blinded and realizes his errors and “blindness” before losing his eyes.

The performance is done in a small space in modern dress. There are soldiers in modern fatigues with machine guns and knives but no swords. It all works quite well.

The most praiseworthy aspect of the production is the ease and naturalness of the performances. McKellen and the rest of the cast make everything seem effortless and there was nothing tendentious about what they are doing. The outstanding cast and director in a small theater produced a great production of a great play.
__________

King Lear by William Shakespeare was taped at the Duke of York’s Theatre in London, England and transmitted on November 24, 2018 at select Cineplex cinemas across Canada.  For more information: www.cineplex.com/events