The Greek community of Toronto was treated to some entertaining amateur theatre by Irida Art Group. They gave a single performance of Έτοιμοι για όλα στο Τορόντο [Ready for Everything in Toronto] to a full house at the Papermill Theatre in Toronto.

Έτοιμοι για όλα στο Τορόντο is the creation of Gregory Terzakis who wrote, directed and starred in the play. It is involves ten people who gather at a Café Bar in Scarborough and go through a series of experiences as they try to cope with life.

The play opens as a melodrama when we meet five men in Kimon’s (Kimon Sikiaridis) café. Things are pretty bleak. The bank has served notice that it will seize the café and his friends can do nothing to help him save it. His friend Dimitris (Dimitris Vohaitis) has just been fired from his job as a journalist. Panagiotis (Panagiotis Apatsidis), Grigoris (Gregory Terzakis) and Kimon’s son Jimmy (Dimitris “Jim” Kamposos) have nothing to offer and disaster seems imminent. 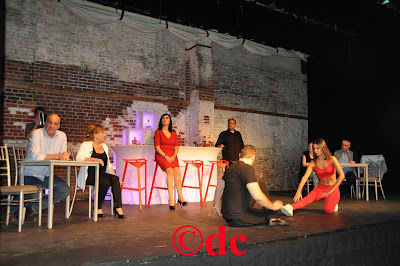 Someone has a brilliant idea. Why don’t we perform dances at a night club and make money to save the café? The play turns into a sit-com as the men engage Irina (Vasso Kokkoni) to teach them how to dance. Irina is a Ukrainian dancer, slim, dressed to kill and hiding none of her sexual magnetism. The men go into hormonal overdrive. They roll their eye, slap their forehead and go into contortions to the delight of the audience.

The dance training does not have sufficient plot material so Terzakis adds sexual and marital entanglements. Kimon is married to Effie (Effie Antonakopoulou), Panagiotis is married to Ioanna (Ioanna Apatsidou) and Dimitris is married to Katerina (Katerina Tsekarea) and Kimon’s son Jimmy is going out with Panagiotis’s daughter Nikki (Nikki Vottea). We have moved into soap opera country.

Kimon, Panagiotis and Dimitris pursue Irina. Grigoris is having an affair with Katerina and Kimon suspects that his son is gay and having an affair with Grigoris. That is quite a list of entanglements. The wives are not sure what their husbands are doing at night and in a hilarious scene catch them in the act of dancing/wooing the lissom Irina. And did I mention that Panagiotis is convinced he saw Grigoris and Jimmy necking in a car with their tongues in action? We have now changed gear and we are in farce mode.

All of these subplots have to be untangled and Terzakis gives himself about three hours to do it.

Terzakis roots the play in the Greek community with numerous references to people and places in Toronto. The production is sponsored by The Greek Community of Toronto and the audience loved the mention of well-know people in the community.

A few comments about the production. I hasten to add that the actors are amateurs and must be judged more for their love of, and dedication to the theatre. For the most part they did a fine job but there were a few gaps. The simple rule of enunciate and speak every syllable was not always followed. Irina speaks in a Ukrainian accent but when she delivers a long, dramatic speech, she gets so involved in it that she forgets her accent.

Terzakis strives for broader type of comedy by making references to authors like Eugene Ionesco, Lorca, Tennessee Williams and others that I did not catch. Nikki, who is studying to be an actress, gets to emote with a few lines from Blood Wedding. When The Bald Soprano is mentioned, Dimitris steps forward and inform us about the play and the date one which it premiered. This struck me as unnecessary and unhelpful.

At three hours, the play is perhaps a bit on the long side. Terzakis insists on milking funny situations even after we have got the joke and he needs to move on to the next episode.

The scene changes were quite awkward because they called for the rickety curtains of the Papermill Theatre to be closed and then opened. Lowering the light would have been more efficient and sensible.

Critical harping aside, the performances was done before an enthusiastic audience who thoroughly enjoyed the whole thing. That is what theatre is all about.
______________
Έτοιμοι για όλα στο Τορόντο [Ready for Everything in Toronto]  by Gregory Terzakis was performed once on December 8, 2018 at the Papermill Theatre, 67 Pottery Road, Toronto, Ontario.