Christopher Morris’s The Runner is a simple play where a rescue worker tells us what he does. Simple play in this case means a piece that delivers an unforgettable narrative of events that are full of humanity from a region where it seems to be all too frequently absent.

Jacob, the only character in the play, is an Orthodox Jew who works for Z.A.K.A., an organization of volunteers. Their gruesome task is to gather the body parts and blood of victims of terrorist attacks in Israel and around the world. The impetus for this seems to be the religious conviction that a Jew should be buried whole.

Jacob finds a dead Israeli man and near him a teenage Arab girl still alive but bleeding. He believes that there are no Palestinians – only Arabs and has no reason not to think that the young girl killed the Israeli man. But something extraordinary happens to Jacob. His humanity overwhelms his life’s mission as a rescuer of victims of Arab terrorists. The Arab terrorist becomes another human being and he tries to save her life. In his attempt to save her, some of her blood spurts in his mouth and he swallows it. 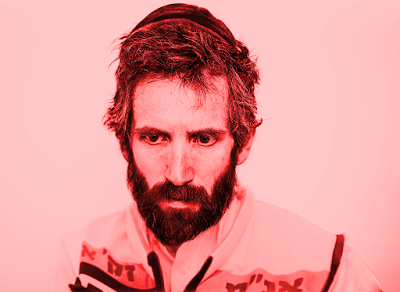 It is an arresting event for Jacob and the audience.

Jacob goes to a mass grave site in Ukraine where the remains of Jews massacred by the Nazis are found. All the victims have a bullet hole in their heads. He sees the corpses of a mother and her child. She is hugging and holding the child close to her but for what? To comfort it? To protect it? To make sure it does not witness the final moments of life?

A scene that takes your breath away.

The title describes literally what happens in the play. Gord Rand as Jacob literally runs or walks throughout the 80-minute performance without an intermission. The set by Gillian Gallow consists of a raised platform the width of a treadmill that could be a conveyor belt on which Rand walks or occasionally runs while he tells us stories of horror and humanity.

A spotlight is shone on Jacob as he runs/walks on the belt and there are times when he seems almost unable to continue. He tells about his domestic life with a mother who has dinner ready for him every night and of her desire for him to get married. He is criticized for helping the Arab girl, especially by his brother. But Jacob persists. His towering humanity overwhelms the hatreds that have made Jews and Palestinians implacable enemies with the latter wanting nothing less than the annihilation of the other.

Gord Rand gives a magnificent performance under the direction of Daniel Brooks in this hymn to humanity.
__________
The Runner by Christopher Morris, in a production by Human Cargo Theatre supported by Theatre Passe Muraille, ran from November 10 to December 9, 2018 at Theatre Passe Muraille, 16 Ryerson Avenue, Toronto, Ontario. www.passemuraille.on.ca (416) 504-7529