UNDERCOVER – REVIEW OF ANOTHER NORTHAN CREATION AT TARRAGON

Rebecca Northan is at it again. This is the spontaneous theatre specialist that gave us Blind Date a couple of years ago and now is back with Undercover, a murder mystery (maybe). It is an unwritten but strictly applied rule that the audience of a thriller shall never disclose “who done it.”

Well, I throw caution to the end, trample on the rule and loudly disclose that Rebecca Northan done it. Just look at the facts. She created the whole thing admittedly with the help of Bruce Horak. She directs the production and stars in it with the panache, timing and natural comedic talent of a master of comedy. 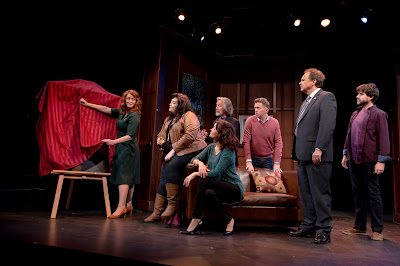 Undercover ensemble with audience member (photo: Little Blue Lemon Inc.)
Undercover involves a Detective Sergeant named Roberta Collins. She sends an undercover rookie detective to a party in a posh house out in the country where she suspects some skullduggery. The house, as befits a thriller, is so far out in the country (I think they said Caledon), that the road is washed away during a storm that happens the very night of the suspected commission of some crime.

Enter the Northan Secret Weapon of Comedy. The rookie detective is none other than a member of the audience who goes on stage with no experience and no foreknowledge of the plot. The cast has no foreknowledge of what to expect from the rookie actor and they all need to improvise.

All six actors prove that they can make things up as they go along but none does it as well as Northan. A pause, a look, a good line, a movement, all are in Northan’s laughter producing artillery. Some of the six actors play two roles and all must adjust to the reality of the unexpected actions and dialogue of the evening’s guest performer.

After basic training, the rookie detective goes to the party. She pretends to know the hostess Goergie (Northan) who is about to sell a mysterious work of art. Her cousin Brook (Terra Hazelton), a pot smoker, is there as well as Lia Da Costa (Christy Bruce) and with a name like that you know she is suspicious. 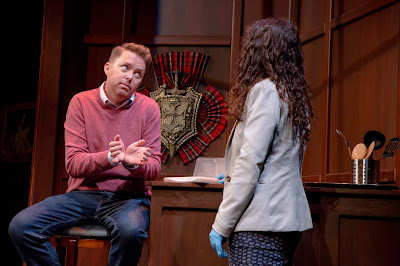 Jamie Northan and audience member (photo: Little Blue Lemon Inc.).
Georgie’s husband Peter (Bruce Horak) is not above suspicious but we pay special attention to “the butler” Daniel (Jamie Northan).  We also have a politician, a future mayor in fact (played by Dennis Cahill) and we certainly cannot trust him. The lights go off during the storm and something terrible happens and I am not referring to the road that’s washed away. Back to the eternal question: who done it?

You will laugh so hard at the scripted and unscripted humour that emanates from the play that you may not care about the identity of the culprit or the motive for whatever happened to cause the commission of the crime and the subsequent highly competent investigation.

The six actors are able to react to the unscripted and unexpected actions of the guest performer with alacrity and the laughter gets louder when they appear almost stumped momentarily by what the guest says or does.

A play that you can see numerous times and never watch the same performance twice.


Undercover  created by Rebecca Northan and Bruce Horak opened on September 19 and continues until October 29, 2017 at the Tarragon Theatre, 30 Bridgman Ave. , .  www.tarragontheatre.com
Posted by James Karas at 8:53 PM