THE CURIOUS INCIDENT OF THE DOG IN THE NIGHT-TIME – REVIEW

At the end of The Curious Incident of the Dog in the Night-Time, Christopher lists his accomplishments and asks if now he can do anything. The question is not answered as the lights go off.

Christopher, brilliantly played by Joshua Jenkins, is an autistic child and the protagonist in Mark Haddon’s 2004 novel which has been adapted for the stage by Simon Stephens and is now playing at The Princess of Wales Theatre. Haddon tries to enter into the mind of Christopher and tell us his story through his autistic eyes. We see the extraordinary behaviour caused by autism, we witness the workings of a brilliant mind in the domestic life of his parents and of the murder mystery that Christopher is trying to solve and about which he has written. It is an astonishing, moving, eye-opening glimpse into the fantasies, phantasmagoria, achievements and suffering of Christopher, of his treatment by the outside world and of the lives of his parents who must endure his irrational conduct. 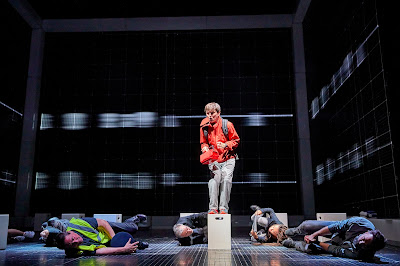 Joshua Jenkins (Christopher) and company - Curious Incident International Tour. Photo: Brinkhoff/Mögenburg
Christopher throws tantrums, does not want to be touched, is afraid of certain colours, cannot abide loud sounds or crowds, is obsessively literal-minded and, in short, he would test the patience of a saint, assuming that the latter can endure the unendurable.

In the opening scene we discover Christopher sitting beside a dog. It is Wellington, his neighbor Mrs. Shear’s (Amanda Posener) dog and someone killed it by sticking a pitchfork in its side. He is accused of killing the dog and arrested after attacking a policeman.

Against his father’s orders, Christopher begins his detective work to find out who killed Wellington. He does some calculations and in the end does make the shocking discovery of who killed the poor creature.

But that is only a part of the story. Christopher has a friend and mentor called Siobhan (Julie Hales) who understands his behavior and shows him ways of dealing with his idiosyncrasies.  His father (David Michaels) is patient but has limited insight into his son’s behavior. His mother (Emma Beattie) could not endure it and she left her husband and her son and ran off with another man. There is a dramatic story about her death and Christopher’s discovery of the truth.

Intermingled with his irrational and ultra-rational behaviour, Christopher shows signs of brilliance. He has a great memory and a phenomenal aptitude for mathematics. He solves equations that would stump most mortals. 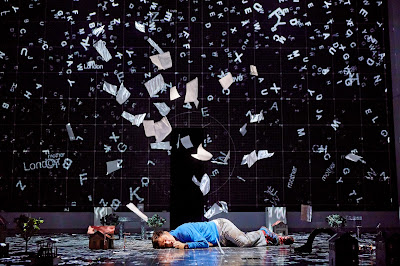 Joshua Jenkins (Christopher) and company. Photo: Brinkhoff/Mögenburg
The play, like the novel, is told in the first person by Christopher and he dominates the production. Jenkins gives a superb performance as a troubled youth, a type of performance that should find itself in the top list of awards for acting. The play has a considerable number of characters as the scene changes from Christopher’s house, to the neighborhood, to his school, the train station and the trip to London as well as life with his mother. Most of the actors play several parts and there are some very quick scene changes. The individual and ensemble performances are outstanding as is the work of director Marianne Elliott.

The set by designer Bunny Christie, the lighting by Paule Constable and the video designs by Finn Ross capture the inner world of Christopher and his relationship with reality as he sees it.

Near the end of the play Christopher is given a dog, a real dog, and he establishes an emotional link with it. He then enumerates his achievements including going to London, solving the mystery of who killed Wellington, getting an A in an advanced mathematics test and writing the book on which this great night at the theatre is based.
__________


The Curious Incident of the Dog in the Night-time by Simon Stephens  based on the novel by Mark Haddon opened on October 15 and will play until November 19, 2017 at the Princess of Wales Theatre, 300 King St. West, , . www.mirvish.com
Posted by James Karas at 3:19 PM