NORMA – REVIEW OF 2017 LIVE FROM THE MET BROADCAST

The Metropolitan Opera is back for its twelfth season of transmissions of operas from New York to the world. The broadcast of Norma is the 110th production that they have sent to people who may never visit (or afford a seat) at Lincoln Centre.

This season’s opener is a new production of Bellini’s masterpiece directed by David McVicar with an all-star cast conducted by Carlo Rizzi. The result is opera at its best.

The vocal centerpiece of the production is soprano Sondra Radvanovsky, a singer in her prime reprising a role that she has mastered. This Norma, like Radvanovsky, is a mature woman, facing major conflicts. She is a religious/political leader who must decide between war and peace with the occupying Roman army while dealing with fundamental betrayal - by her of all that she stands for with the Roman Officer Pollione and by him of her in favor of the younger priestess Adalgisa. 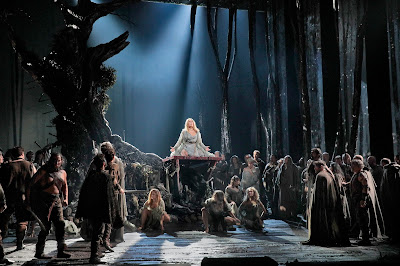 Sondra Radvanovsky in the title role of Bellini's "Norma."
Photo: Ken Howard/Metropolitan Opera
Radvanovsky rises to the vocal and dramatic demands of the role with superb mastery. Her rich and velvet voice conveys Norma’s conflicts, her maternal love, anger and pain in the face of treachery and, finally, redemption through self-sacrifice.  The apogee of Norma is no doubt “Casta diva” and Radvanovsky summons all her powers in her performance. But did she add an “e” between casta and diva? The “a” of casta does not flow into the “d” of diva smoothly without what sounded like an e in between.

The mellifluously-voice mezzo Joyce DiDonato portrays the young priestess Adalgisa. DiDonato is perfectly cast. Her Adalgisa is a youthful blonde who shows a bare shoulder that adds sexual allure to vocal splendor. It explains why Pollione is attracted to her (aside from the fact that he is a jerk) and abandons Norma, the mother of his children and a woman who has risked and betrayed all for him.

Tenor Joseph Calleja has a clarion voice and a heroic manner and he makes an ideal Pollione, a man who is interested in himself only.

David McVicar’s new production deserves plaudits for originality, intelligence and brilliance. We start with the forest where the Druids meet by the scared oak tree to hear Norma’s decision on war and peace. But as the curtain goes up we see soldiers carrying corpses on stretchers. The peace treaty between the Romans and the conquered Druids is not holding up and we understand why the latter are eager for war.

When Norma ascends the platform to address the crowd, she reaches down and takes the hand of Adalgisa, her protégé, friend and, eventually, traitor. During “Casta diva” Adalgisa joins Norma on the platform. Marvelous touches all. 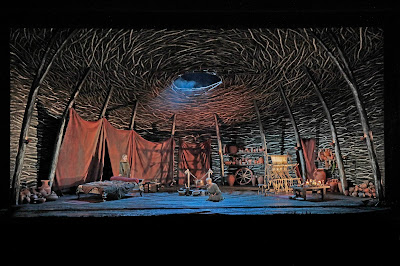 A scene from Act I of Bellini's "Norma." Photo: Ken Howard/Metropolitan Opera
The scene changes to Norma’s dwelling. The set with the forest and sacred oak trees is raised and underneath it we find Norma’s residence made from the roots of the oak tree. There is a bed on which we see the children and this is Norma’s and Pollione’s lair. A simple but brilliant connection.

With the domestic scene and many other touches, McVicar directs our attention to and emphasizes the human drama as much as the political and religious issues between the Romans and the Druids. Radvanovsky and DiDonato portray flesh and blood women more than public figures in a barbaric age.

Carlo Rizzi conducted the Metropolitan Opera Orchestra in a crisp and superb performance of Bellini’s music in an overall stunning production.
___________________


Norma by Vincenzo Bellini with libretto by Felice Romani was transmitted Live in HD from the Metropolitan Opera on October 7, 2017 at the Cineplex VIP Don Mills Shops at Don Mills, 12 Marie Labatte Road, Toronto Ontario M3C 0H9 and other theatres. Encores will be shown on November 4, 6 and 8, 2017 at various theatres. For more information: www.cineplex.com/events