THE ELIXIR OF LOVE – REVIEW OF 2017 CANADIAN OPERA COMPANY PRODUCTION

The Canadian Opera Company serves us a delightful, delectable and delicious Elixir of Love with a strong Canadian flavor, scrumptious singing and most of it done by Canadians. More about the last bit further down.

Donizetti’s enchanting comedy requires five singers who must create and exude a sense of innocence, an atmosphere of geniality and a pleasant community that exists mostly in our imagination. Where can you find a place like that? Easy. Visit a small, rural town in southern Ontario on a sunny day before World War I. That is where director James Robinson sets this production. It all started in a small town in the United States but, there being no travel bans yet, they all moved to the friendlier realm of Canada. Well, Robinson changed the locale to Ontario. 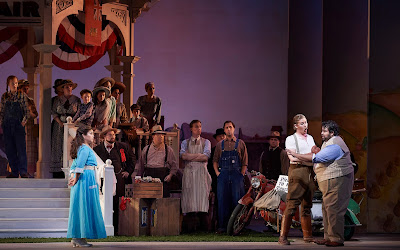 Simone Osborne as Adina (at left) with Gordon Bintner as Belcore
and Andrew Haji as Nemorino (at right). Photo: Michael Cooper
Nemorino (Andrew Haji) has an ice cream truck and consumes what he sells with considerable generosity. But he is an innocent, lovable bumpkin who is love-struck with the very pretty Adina. His profession and girth, do not give him a head start in the race for Adina’s heart. Haji has a dulcet, light tenor voice and he conveys the innocence, ardour and total lovability of Nemorino perfectly.

Adina is rich, beautiful and flirtatious, the type of girl that any red-blooded Ontarian from Dundalk to Dorset would give up his acreage for. Soprano Simone Osborne embodies all the qualities we want to see in Adina and gives her an agile, honeyed voice that is an aural delight.

Sergeant Belcore is a swaggering, mustachioed recruiting officer in a well-pressed uniform that would burst at the seams if his ego were any bigger. Baritone Gordon Bintner’s voice resonates with confidence and we (almost) forgive Adina for falling for the cad.

Baritone Andrew Shore takes on the role of the quack Dr. Dulcamara who sells an elixir guaranteed to get you any woman. It is a fine comic role and Shore does a very good job in that regard. Unfortunately, he was in poor vocal form on the date that I saw the production (October 17), especially at the beginning. He was better near the end.

Soprano Laura Eberwein displayed her beautiful voice in the relatively small role of Giannetta and no doubt we will be seeing much more of her in the future. 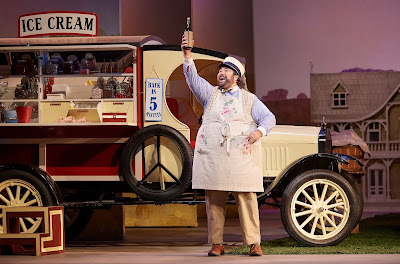 Andrew Haji as Nemorino in the The Elixir of Love, 2017, photo: Michael Cooper
The opera is set, as I said, in a small town in Ontario. The set (designed by Allen Moyer) focuses on the town’s bandstand, decorated with banners and flags. The town people are dressed in festive attire of the period, the sun is shining and life is good. Is it July 1, 1914? We have a cheerful, happy atmosphere with the townspeople (the marvelous COC Chorus) providing a social milieu and vocal pleasure.

One does not usually make too much fuss about the origins of the cast except perhaps to add, say, Russian or America before a singer’s name. There is a difference here. Most of the cast is young and Canadian. In fact the conductor and four of the five singers (Andrew Shore s the exception) are young Canadians. This is not pointless flag waving. It is a round of applause to the COC and in general for Canada for nurturing a crop of musical talent especially in opera, a form of entertainment that is struggling to maintain and increase its fan base and is usually dominated by non-Canadians.


The Elixir of Love by Gaetano Donizetti (music) and Felice Romani (libretto), opened on October 11 and will be performed eight times until November 4, 2017 on various dates at the Four Seasons Centre for the Performing Arts, 145 Queen Street West, Toronto, Ontario. Tel:  416-363-6671. www.coc.ca
Posted by James Karas at 10:33 AM