North By Northwest will inevitably get two distinct reactions from the people who see it at the Royal Alexandra Theatre. The play is based on Alfred Hitchcock’s 1959 film starring Cary Grant and Eva Marie Saint and it has at least one iconic scene that almost everyone has seen. Grant goes to an arid and desolate crossroads in Indiana to meet someone. There is no one there but a crop-dusting plane tries to kill him. We see him running as fast as he can for cover in a cornfield and the plane smashes into an oil tanker. Heady stuff.

Those who have seen the movie will be fascinated to watch how a plot that involves numerous scenes, a car chase, a colliding plane, a train ride and a scene atop Mount Rushmore can be adapted for the stage. They know the plot, of course, and the surprises will come in the method of transferring from screen to stage. 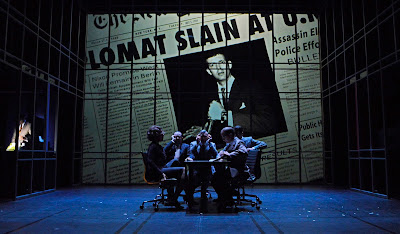 North by North West - Theatre Royal Bath. Credit: Nobby Clark
These who have not seen the movie will follow the adventures of Roger Thornhill (Jonathan Watton), an advertising executive, who is mistaken for someone called Kaplan and is taken at gunpoint by a couple of thugs from the swanky Plaza Hotel in New York. He is forced to drink a bottle of bourbon, to drive while blotto drunk, be accused of a murder in the United Nations Building and escape with the assistance of the beautiful Eve (Olivia Fines.)

Eve “protects” Roger from the police, sends him to Indiana and is obviously trying to dispatch Roger to Hades or Elysium. He falls in love with her and she shoots him Gestapo-style. We are on Mount Rushmore and need to work things out.

The adaptation of the Hitchcock movie’s screenplay by Ernest Lehman is done by Carolyn Burns who is amazingly faithful to the original. The dialogue is almost identical with that in the film and aside from a few sequences being eliminated, we follow most steps of the movie. That necessitates numerous fast scene changes and the use of videos and theatrical tricks for us to follow the plot. There is considerable ingenuity and we know right from the start that we are watching a stage presentation of the movie.

For the scenes with cars, the passengers sit on a couch while stage hands push it to simulate driving. Projected videos are used for the planes and quick changed of props for changing locales. The main feature of the set is glass panels that resemble the exterior of those glass high rises that we see downtown. 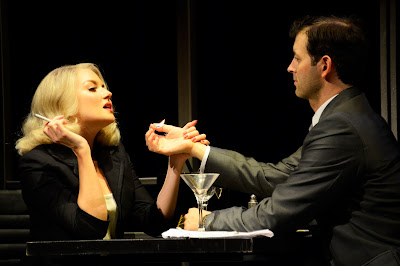 Olivia Fines and Jonathan Watton in North by North West –
Theatre Royal Bath. Credit: Nobby Clark
Watton and Fines are the only two actors that play one role while the others take on numerous parts. Gerald Kyd plays the villain Vandamm who, disguised as art dealer, engages international espionage. Abigail McKern plays Roger’s mother and several minor roles. Nick Sampson plays The Professor who is in fact an FBI/CIA man fighting for the good guys.

As in any good thriller, character development is of minor importance as we rush through the plot twists, the close calls, the unexpected turns until we get to the final resolutions. Director Simon Phillips carries us along for the ride with the international cast on hand. Watton is a Canadian and I am not sure why Phillips felt that he should speak in a New York accent. Don’t bother. The same applies to a number of characters for whom the accent does not come naturally.

Fines is English, Kyd is half Scottish and half Greek, McKern is Australian-English, Nick Sampson and Tom Davey, if I am not mistaken, are British. Trying to get a consistent accent of any kind would be tough.

In any event, the familiar plot for those who have seen the movie and the unfamiliar story of those who have not provides an evening (or afternoon) of light entertainment.
_________
North by Northwest adapted by Carolyn Burns from the screenplay by Ernest Lehman for the film directed by Alfred Hitchcock opened on September 24 and will run until October 29, 2017 at the Royal Alexandra Theatre, 260 King St. W. Toronto, Ont. www.mirvish.com