Do you want to see a play in which the actors speak, make that yell, at the top of their lungs in a small theatre for much of the performance? And you can’t really tell who three of the seven characters are until near the end of the play?

You do? Well, the Stratford Festival has just the ticket for you. It is The Virgin Trial by Kate Hennig, a new play that the Festival commissioned and is now playing in the Studio Theatre.

The virgin of the title in Bess better known as Queen Elizabeth I of England who earned the moniker denoting complete abstention from sexual intercourse largely because she never married. The Bess we see in the play is Princess Elizabeth at age fourteen shortly after her father, King Henry VIII died and who lived with Katherine Parr, his last wife. Her uncle Ted was appointed Lord Protector of the Realm and Ted’s brother got the job of Lord High Admiral and he married Katherine Parr. 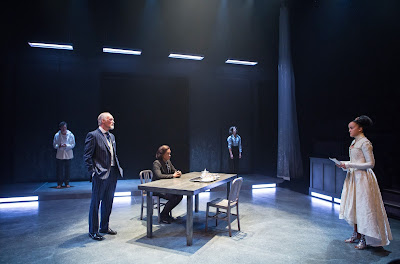 Members of the company in The Virgin Trial. Photography by Cylla von Tiedemann.
The identity of Bess, Ted, Thom and Mary are quickly discerned. But there are three other characters who are listed in the program as Eleanor, Parry and Ashley with no other information. Why is Stratford showing such lack of consideration for its audience? How hard would it be to tell us that Ted is Edward Seymour, the Lord Protector or that Thom is Thomas Seymour, the Lord High Admiral? Yes, they are the brothers of Anne Boleyn, Elizabeth’s mother.

Who are Eleanor, Parry and Ashley? We first see Eleanor as a fierce, nasty woman serving water to Bess on a tray. When the unctuous Ted appears, she becomes the note taker for the questioning of Bess. Later we see her as a gleeful torturer. Near the end of the play we discover that she is responsible for the security of the realm. The play has a modern setting and historical accuracy is not an issue but telling us who the repugnant woman is from the start may have been a good idea.

Ashley and Parry mill around Bess and we guess that they have some position wherever she is living. But what? We should not have to guess and even if we did we may be wrong. 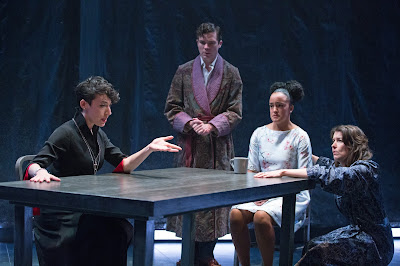 From left: Sara Farb as Mary, André Morin as Parry, Bahia Watson as Bess and
Laura Condlln as Ashley in The Virgin Trial. Photography by Cylla von Tiedemann.
The play features enough plots, counterplots, machinations, intrigues, lies and torture to make your head spin but that’s part and parcel of struggles for power be it in the sixteenth or twenty-first century.

The teenage Bess played by Bahia Watson is smart, stupid, naïve sophisticated, truthful, mendacious, sexually active and, in the end, virginal. Hennig loads her with all these characteristics and because Bess was precocious but nevertheless young, all of them may well apply. Watson gives quite a performance except for the volume level that she spoke in.

Yanna McIntosh is powerful, conniving and brutal as Eleanor and if we knew her job from the start we would have enjoyed her performance even more. Appearing with a tray in her first appearance did not help. Think of Eleanor as a KGB or CIA interrogator when torture was (is) permitted.

Even creepier was Ted played by Nigel Bennett. He raises hypocrisy to new levels as he pretends to be the benign protector of Bess, ever solicitous of her safety. Then we see him as the conniving, power-hungry brute that he is. You don’t want him against you or around you.

Brad Hodder as Thom is an ambitious manipulator who wants power but lacks the cunning to get it and ends up in the tower. Andre Morin as Parry and Laura Condlin as Ashley are pawns in the chess game of power politics and end up getting tortured and worse.

Sara Farb plays Princess Mary, the future Bloody Queen who is ambivalent about supporting her sister while fearing for her life.

Much of the action takes place on an empty stage save for a table and a couple of chairs. The torture scenes are played behind a cloudy plastic curtain for reasons that escape me. The design is by Yannik Larivée.

Director Alan Dilworth seems to think that speaking loudly, really loudly, makes a scene more dramatic. In a small theatre, it makes it unnecessary and annoying. Two actors speaking at the same time or interrupting each other may be effective in certain situations. In this play it was not.
__________________


The Virgin Trial  by Kate Hennig continues in repertory until October 8, 2017 at the Studio Theatre. 34 George Street, Stratford, Ontario. www.stratfordfestival.ca
Posted by James Karas at 2:29 AM