The phrase “thinking out of the box” is used frequently to describe ideas that are neither very original nor deserving of particular adulation. That cannot be said of Judith Thompson’s Wildfire, a moving theatrical creation about people with Down syndrome that is acted by people with the genetic disorder.

Three young women and four young men with acting experience walk in the acting area of the Tank House Theatre in the Young Centre and face the audience. They speak directly to us about love that is like a wildfire and burns everything. 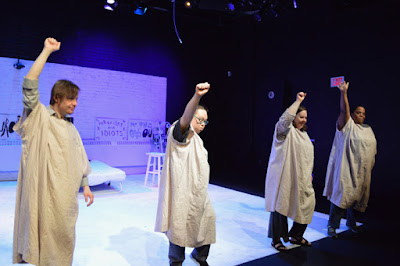 Dylan Harman Livaja, Michael Liu, Sarah Carney and Suzanne Love, photo: Sophia Thompson-Campbell
They speak about themselves and especially about the institutionalization and degradation of people with the genetic disorder that they are all afflicted with. They speak of Huronia Asylum for Idiots and Imbeciles. The patients or inmates suffered abuse and violence in an institution that was no different from a prison. They were even used for experiments. There was no reading, no writing and no attempt to assimilate them into the rest of society.

One of the horrifying stories that they relate is the fate of Rosemary Kennedy, the daughter of Joseph Kennedy and the sister of President John F. Kennedy. Rosemary was intellectually disabled but her father arranged for her to have a lobotomy and she was effectively erased from existence.

The actors even put on their own version of Romeo and Juliet and contrive a happy ending for us. Romeo and Jazz, two gay men, are married and kiss lovingly. The actors then pick up the posters from the back of the stage and turn them over for the audience to see. During the performance, the posters read “Huronia,” “No visitors,” “No exit” and maxims like that suitable to a prison. When they are turned over we see the names and dates of former inmates, most of them having died as teenagers. 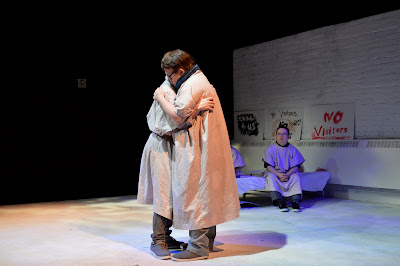 Dylan Harman Livaja, Nicholas Herd and Michael Liu, photo: Sophia Thompson-Campbell
The final insult of the institution was to bury the inmates in unmarked graves or graves with only a number.

Brett Haynes’ set consists of stark white background with the posters I just mentioned lined up across the back of the stage. Denis Huneault-Joffre has designed a bland overall for the actors to wear befitting people who have no individual existence.

We see people on stage who are both actors and sufferers of Down syndrome. They are performing in a play as well as describing their own lives. It is drama and documentary combined where fact and fiction are almost inseparable. What they tell us applies to the victims of long ago, to today’s people and to them at the same time.

Judith Thompson who knows something about genetic disorders (she has epilepsy) has created the amazing play and directs it. It is something unexpected, moving, and instructive, and shows thinking and creativity that are decidedly “out of the box.”
______

Wildfire created and directed by Judith Thompson, in a production by RARE Theatre Company continues until May 30, 2017 at the Tank House Theatre, Young Centre for the Performing Arts, 55 Tank House Lane, Toronto, Ontario. www.soulpepper.ca