The Boy in the Moon is a heart-wrenching and emotionally draining play that receives a stunning production from Crow’s Theatre. It sustains an emotional level throughout its uninterrupted ninety minutes that many productions would be lucky to reach in their climactic moments.

The play is based on Ian Brown’s book The Boy in the Moon: A Father's Search for His Disabled Son, which has been masterfully adapted for the stage by Emil Sher. The boy, named Walker, is born to Brown and his wife, columnist and film critic Johanna Schneller, with a rare genetic disorder that leaves him severely handicapped.

Walker’s limitations and his resulting needs almost defy belief. He is fed through a tube in his stomach and he is incontinent. He punches himself almost constantly and attaching the feeding bag to his stomach and changing his diaper while keeping his arms and legs from wreaking havoc require manual and bodily dexterity that would tax an Olympic gymnast. Brown has had to do it countless times. 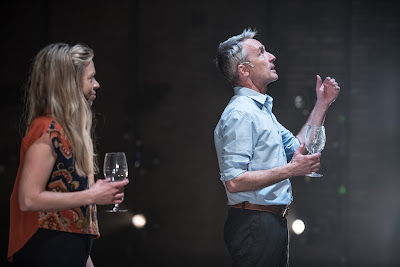 Liisa Repo-Martell and David Storch. Photo Dahlia Katz
That was only a small part of the routine of looking after Walker. He would scream or make noises for hours. Brown and Schneller could rarely get a good night’s sleep and arguments between them increased putting a serious strain on their marriage.

Sher has been able to take parts of the harrowing story which is heartbreaking on the page but seems like a poor candidate for the stage and fashioned a play that captures the tragic life of Walker and his effect on Brown, Schneller and his older sister Hayley. Amid the excruciating difficulties of living with and caring for Walker, we see the love, the unbelievable love that Brown and Schneller have for him.

But the two are only human and the stress put on their physical and emotional stamina gets the better of them and Brown considers methods of ending Walker’s and his own life.

David Storch gives a stellar performance as Brown. He illustrates Brown’s hellish emotional arc, his attempts to find an answer to the unanswerable, his efforts to reach his son (like looking at the man or boy in the moon when you know he is not there), the wrenching decision to place him in an institution and above all, his love. That is an emotional journey that Storch takes as Brown in a performance that is first rate. 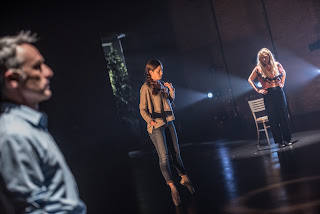 David Storch, Kelly McNamee, Lisa Repo-Martell. Photo: Dahlia Katz
Liisa Repo-Martell plays Schneller and she goes through emotional hell as well. The book is written by Brown and he gets most of the attention but she is equally affected and their love for Walker and the distress at their separation are simply unforgettable. A superb performance by Repo-Martell.

Kelly McNamee plays daughter Hayley and a number of minor characters. She is in part the victim of Walker’s condition and the impact it has on her parents’ life. She does some short ballet sequences as an antidote to the horrors of life at home and perhaps as an illustration of what life may have been like if her brother were born normal.

Director Chris Abraham, aside from getting outstanding performances from the cast, makes full use of the almost empty stage. Circles of light are used judiciously to indicate the moon. He and Monica Dottor have choreographed scenes that give some graphic illustrations of life with Walker.

A deeply moving night at the theatre.
____


The Boy in the Moon by Emil Sher based on the book by Ian Brown opened on May 12 and will play until May 2, 2017 at the Streetcar Crowsnest Theatre, 345 Carlaw Avenue, Toronto, Ontario M4M 2T1. http://crowstheatre.com/