The Canadian Opera Company wraps up its 2016-2017 season with the second revival of Paul Curran’s production of Tosca. It is a highly praiseworthy production that has stood the test of time very well.

The COC has assembled a first rate cast led by Canadian soprano Adrianne Pieczonka in the title role with tenor Marcelo Puente as Cavaradossi and bass-baritone Markus Marquardt as Scarpia. The latter two are making their COC debus while Pieczonka sang in the 2008 revival of this production.

Much depends on the soprano who plays the lead role and handles the passionate, histrionic and highly dramatic Tosca. She is jealous, suspicious and loving in the first act. Her over-the-top jealousy and suspicions elicited some laughter. In the second act she is the diva who is forced to hear her lover being tortured as the malevolent Scarpia tries to seduce her. He wants her body in exchange for Cavaradossi’s life. In the third she is heroic as she celebrates the imminent release of Cavaradossi and their escape to freedom. 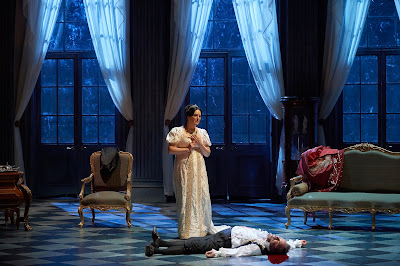 Adrianne Pieczonka as Tosca and Markus Marquardt as Scarpia in Tosca. Photo: Michael Cooper
Her sumptuous voice is lyrical, passionate and dramatic as she goes through the various stages. “Vissi d’arte” is Tosca’s signature aria, a recollection of a life for art, beauty, faith and humanity wrecked by a malicious officer of the law. Even God has forsaken her. My one complaint is about her performance in the scene where she stabs Scarpia. After inflicting psychological torture on her and getting her to finally submit to his lechery, Tosca kills her tormentor. It is a moment of supreme triumph and horror. She taunts him as he is dying and when she sings “Die …die…die” I wanted to hear a scream filled with venom and triumph. Pieczonka was dramatic but fell short of the possibilities of the scene.

I wonder how effective it would be if, after her last expression of contempt and victory, “And before this man, all Rome trembled!” she spits on him?

Puente sang an impressive Cavaradossi. In his moment of triumph when he hears that Napoleon has conquered Rome, Puente belts out and holds “Vittoria” and sings joyously about freedom. In “E lucevan le stele,” his beautiful aria before his death, he remembers falling in love with Tosca, her embrace, her languorous caresses and her radiant beauty. He sings with so much pathos, longing and beauty that he brought the house down. 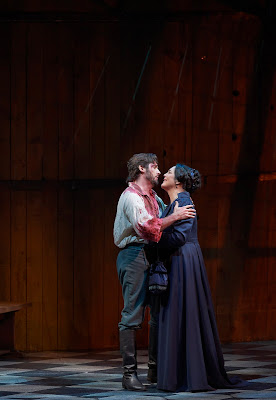 Adrianne Pieczonka as Tosca and Marcelo Puente as Cavaradossi in Tosca. Photo: Michael Cooper
Marquardt is a business-like creep which increases his malice and lust by not being overdone. He is a man who knows his power and is free to treat and mistreat people at will. Marquardt succeeds in his portrayal vocally in his assured singing and as a character in his display of evil.

Curran and Set and Costume Designer Kevin Knight take a conservative approach to the opera. The church of Sant’Andrea della Valle in the opening scene is monumental with two large columns dominating the set. The columns are moved to the side opening the whole stage to the entry of a very sumptuously attired chorus that delivers a rousing end to Act I.

Scarpia’s office in Act II is elegantly furnished as becomes its powerful occupant. The     ramparts of Castel Sant’Angelo where Cavaradossi is executed and from which Tosca jumps to her death are impressive and appropriate.

The COC Orchestra is conducted by Keri-Lynn Wilson who has many virtues as a conductor in addition to doing a superb job. She is a woman (yes, they are still a rarity on the podium), she is Canadian and she is making her debut with the COC. What more do you want?

An overall outstanding production of one of the most popular operas.
_____

Tosca by Giacomo Puccini opened on April 30 and will be performed twelve times with some cast changes until May 20, 2017 at the Four Seasons Centre for the Performing Arts, 145 Queen Street West, Toronto, Ontario. Tel:  416-363-6671. www.coc.ca
Posted by James Karas at 4:53 PM