Strictly Ballroom, The Musical, has the benefit of truth in the title. It is indeed an extravaganza of ballroom dancing based on Baz Lurhmann’s 1992 film of the same name, minus the subtitle.

There is a plot that may be described as typical of a musical, there is singing, some production (and perhaps overproduction) values that bring colour, energy, movement and even excitement. But most of all there is serious, competitive ballroom dancing that is elegant, muscular, virtually acrobatic and simply extraordinary. 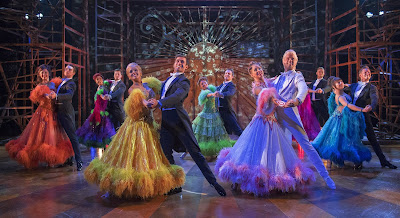 The musical is set in Australia where ballroom dancing seems to be taken as a competitive sport and winning the Pan-Pacific Dancing Competition is like winning the Stanley Cup. The plot is, to coin a phrase, as corny as Kansas in August. Scott (Sam Lips) comes from a family of ballroom dancers and he is aiming for the Pan-Pacific. He is a brilliant dancer and he wants to be creative as well as highly competent. In other words he wants to invent his own steps and according to the rules that is unacceptable.

He meets the frumpy Fran (Gemma Sutton) and dismisses her out of hand until he realizes that, like him, she is not only highly talented but also inventive.

His mother Shirley (Tamsin Carroll) and Fran’s proto-homo sapiens father Rico (Fernando Mira) oppose the idea for different reasons. Rico can do some remarkable Spanish steps but he is very short on temper and English. The latter characteristic with Fran’s grandmother Abuela’s (Eve Polycarpou) equal facility with English provide some laughs but more annoyance.

With so much opposition to Scott and Fran dancing together and some other complications the big question as to who will dance and who will win and who will be disqualified for the Pan-Pacific remain in suspenseful doubt until the last pirouettes and acrobatics of the evening. Sure.

Photo from 2016 UK Production of Strictly Ballroom - Photo Credit: Alastair Muir
There are a number of songs by the main characters and the ensemble but no one will be indicted for first-degree singing and most will get clemency and some credit for second degree renditions usually with fervor if not tonal beauty.

The revolving set by Soutra Gilmour provides quick changes in scenes with risers on the side, a big arch with room for actors on the top and generally a grandiose effect.

The costumes by Catherine Martin provide the usual frills for the women dancers, tights and sparkles for everyone and legs that go on forever to combine with generous displays of flesh.

Drew McOnie choreographed and directs the large cast in what is intended and is very much a ballroom dancing extravaganza held together by a corny plot but enhanced by production values that some may consider overdone.

Lips, Sutton, Carroll, Charlotte Gooch, Lauren Stroud, Gary Watson and the ensemble display grace, athleticism, vigour and sheer dancing talent that is nothing less than astounding. The rest is simply a means of getting them on stage to dance.
___

Strictly Ballroom, The Musical created by Baz Luhrmann, adapted by Terry Johnson based on the film with new musical numbers by various composers opened On May 3 and will continue until June 25, 2017 at The Princess of Wales Theatre, 300 King St. West, , . www.mirvish.com.
Posted by James Karas at 4:04 PM