Edward Albee’s The Play About the Baby is marvelously absurdist, funny, dramatic and a piece that is out of the natural and logical world. Erika Downie directs a superb production for Seven Siblings Theatre that revels in the theatricality, mystery and enigmatic variations of the play.

The opening scene of the pay cannot be simpler. A pretty and very pregnant woman and a handsome young man in a very pleasant –looking room. “I am going to have the baby now” says the woman and the lights go down as they exit the stage. That may qualify as one of the shortest scenes in drama but after a short break of the “usual” sounds of giving birth, the couple returns. 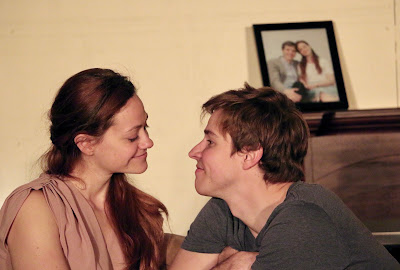 Nora Smith and Will King in The Play About the Baby
The dialogue begins about the pain of giving birth but soon trails off into non-sequitors about a broken arm, pain and armpits until they go off stage to make love. The young man is referred to simply as Boy (Will King) and the young woman as Girl (Nora Smith).

A Man (Scott McCulloch) enters and he makes a long speech as our perceptions and our conduct in certain social situations. He smells the chairs and tells us that they have a young smell. He addresses the audience throughout his speech and what he says makes sense but it is also non-sense.

As he leaves the stage a Woman (Judith Cockman) appears. None of the characters has a name. Boy meets Woman and he does not know who she is. They engage in conversation with sexual innuendos and the Boy goes away with the Girl to continue with their love-making.

The Woman engages in a long speech of sense and nonsense that is entertaining and confusing. Who are these people? Where are we and what do they want? They could be gypsies who want to steal the baby. To sell it? To eat it? They don’t look like gypsies. And the baby? The title tells us that this is a play about the baby, the baby that Boy and Girl had in the opening scene and where is that baby?

McCulloch as the strange Man and Cockman as the equally strange Woman give performances so full of energy and sheer theatricality that the battery-advertising bunny should hang up its ears and retire. They appear ordinary, occasionally sensible and totally confusing. But they carry the audience with them at every step. 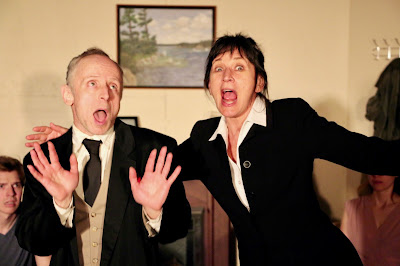 Scott McCulloch and Judith Cockman in The Play About the Baby
Boy and Girl are their victims or their prey or perhaps a mirror image of Man and Woman in their youth or are they the same people in youth and middle age. The possibilities are endless. King and Smith give outstanding performances as they try to cope with the strange visitors. Just watch their faces as they express surprise, shock, fear and confusion. Sensitive, nuanced performances in difficult roles.

Kudos for the performances belong to director Downie who controls every nuance and grimace of the players and maintains the pace to keep the play going as the audiences tries to keep up with the twists of Albee’s absurdist logic.

A word about the theatre. The second floor of The Rhino at 1249 Queen Street West is rectangular room with about 40 chairs lined up in front of a playing area. The actors are five to twenty feet from the audience and the space between players and watchers almost disappears. The actors can look people in the eye and interact with them. This is theatre in your face and it is simply amazing .
____


The Play About the Baby by Edward Albee in a production by Seven Siblings Theatre, played from May 12 to May 21, 2017 at The Rhino, 1249 Queen St W, 2nd Floor, Toronto, Ontario. http://www.sevensiblingstheatre.ca/the-play-about-the-baby/
Posted by James Karas at 12:40 AM