WITHIN THE GLASS – REVIEW OF CHATTERTON’S PLAY AT TARRAGON

Within the Glass, Anna Chatterton’s new play is roller coaster of emotional outbursts dealing with the highly sensitive issue of in vitro fertilization. An egg is fertilized by sperm outside the body and the resulting embryo is transferred into the uterus of the mother or a surrogate

The procedure is fraught with emotional and legal issues especially if the embryo is transferred to a woman who will carry the embryo to term. 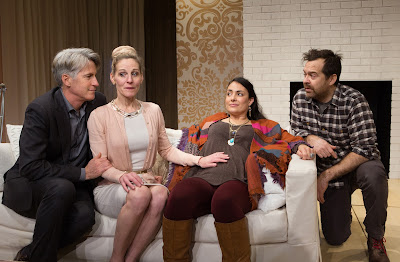 Rick Roberts, Philippa Domville, Nicola Correia-Damude and Paul Braunstein. Photo Cylla von Tiedemann
Michael (Rick Roberts) and Darah (Philippa Domville) are a successful couple who live in a well-appointed house. She has been unable to conceive a child naturally and they have resorted to in vitro fertilization without success.

In their last effort, the clinic mixed up their embryo with that of Scott (Paul Braunstein) and his wife Linda (Nicola Correia-Damude). Darah’s pregnanacy was unsuccessful but Linda is carrying Darah’s and Scott’s fetus. (They make a great distinction between “child” and “fetus”.

When the play opens the two couples are about to meet for the first time to sort things out. Michael and Darah’s emotions are stretched to the breaking point as they rush around in extremis while expecting Linda and Scott. There is “a problem” to put it very mildly, indeed there are many problems. Linda, as the carrier of the embryo” has become attached to it and wants to keep the child. The words “abortion” and “adoption” are mentioned as the two couples engage in vehement and volatile arguments.

The emotional extremes are pushed even further with Michal becoming attracted to Linda while her husband is fuming and wants nothing to do with the fetus or the situation. He is an outsider to the whole situation with his wife becoming attached to someone else’s fetus/child.

The complex and raw emotions involved in IVF and surrogacy may be difficult for outsiders to comprehend. Add to that the grotesque error of placing the embryo in another woman’s uterus and the situation becomes monumentally explosive.

Within the Glass has numerous emotional spikes where the actors perform at fever pitch. Chatterton has to somewhat stretch her material to fill the ninety minutes that the play lasts. There is some well-placed humour but I would have preferred a slower build up to fewer climactic scenes.

Rick Roberts and Philippa Domville are nervous wrecks as they rush around trying to survive an awkward and frightful situation for them. They want a child and after a few miscarriages they are near the end of their endurance.

Correia-Damude’s Linda has her own issues with the sanctity of life, her emotional attachment to the fetus and her legal rights. Scott seems to be a misconstrued character. He is supposed to be a poet which should indicate emotional sensitivity and verbal skills. He comes out like a duffus who should be driving a truck.

Andrea Donaldson directs the play at a brisk speed and she does not understate any emotional reaction.  The production may have gained if more restraint were shown but the issues addressed are so devastatingly emotional for the people involved in real life and the characters of the play, that some of us may simply be unable to appreciate.

Within the Glass by Anna Chatterton opened on January 13 and will play until February 14, 2016 at the Tarragon Theatre, 30 Bridgman Ave. Toronto, Ontario.  www.tarragontheatre.com
Posted by James Karas at 10:27 AM