There is no play by D. H. Lawrence called Husbands and Sons but if go to the National Theatre in London you will see parts of three of his plays performed together on the same stage. Ben Power has taken A Collier’s Friday Night, The Daughter-in-Law and The Widowing of Mrs. Holroyd and adapted them so that each play can be performed in a different area of the stage. We jump from the story of one family to the other seamlessly and the three stories are told fully.

The result is riveting theatre as we get a terrifying picture of life in a coal mining community in northern England early in the twentieth century. It reflects on the roots of Lawrence himself whose father and grandfather were miners. 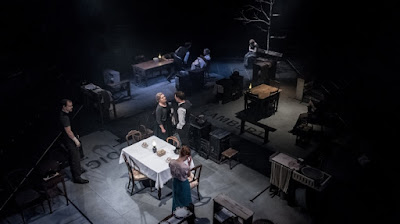 The Company of Husbands & Sons. Photo by Manuel Harlan
Lizzie Holroyd (Anne-Marie Duff) is married to Charlie (Martin Marquez) an abusive and foulmouthed drunkard who picks fights and comes home beaten up. He is unbearable. She has the electrician Blackmore (Philip McGinley) visiting and he says he is in love with her. She is torn between loyalty to her husband and attraction to Blackmore.

Walter Lambert (Lloyd Hutchinson) is another drunk. His wife Lydia (Julia Ford) must deal with him and her two children: her growing daughter Nellie (Tala Gouveia) and her son Ernest (Johnny Gibbon) who goes to college and is in love with Maggie (Cassie Bradley).

In the Gascoigne family, Minnie (Louise Brealey) despises her husband Luther (Joe Armstrong) because he is a gutless lump of coal. He is in trouble because he has left a woman pregnant and her mother wants to hush up the whole thing for a price.

These are the central conflicts that the three families face. Even though the title of the play is Husbands and Sons the most powerful and interesting characters are women. Anne-Marie Duff is outstanding as Mrs. Holroyd who has endured physical and emotional abuse and cannot tear herself away from her husband. 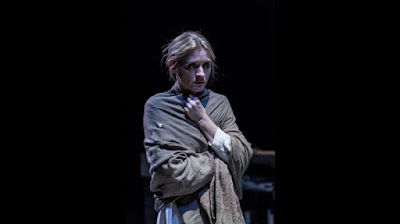 Julia Ford as Mrs. Lambert is a woman that must endure the pain of separation from her son who confides in and wants to be with his girlfriend to the exclusion of his mother. Her husband feels left out and is accordingly bitter.

Louise Brealey gives a tough and snappy Minnie. She wants her husband to be a man and not a dishrag and goes to great efforts to change him. Mrs. Gascoigne (Susan Brown), Luther’s mother is another tower of strength who must deal with a rebellious daughter-in-law and her two sons.

The cast provides powerful, dramatic and moving performances. What at first blush appears like an impossible attempt to put the stories of the three families on stage at once and rotate the action among them, turns out to be a triumph of staging, directing and performance.

Director Marianne Elliott does a masterful job of creating the tense and dramatic atmosphere of the mining community, the love, the abuse, the fear, the pain and the struggle to survive.

Lawrence’s plays are rarely seen. This production should act as a sharp reminder to theater companies that they are denying us the chance to see some extraordinary drama.
__________


Husbands and Sons adapted by Ben Power from D. H. Lawrence’s A Collier’s Friday Night, The Daughter-in-Law and The Widowing of Mrs. Holroyd continues at the Dorfman Theatre in the National Theatre, South Bank, London, England.  http://www.nationaltheatre.org.uk/
Posted by James Karas at 2:06 PM