The Royal Opera, Covent Garden, seems to have struck gold with Richard Eyre’s 1994 production of La Traviata. It has been reviving it every other season since then with great success and every major soprano and tenor seem to have sung the leading roles. For the current season they have assembled three casts for the principal roles and the opera will be performed fourteen times. 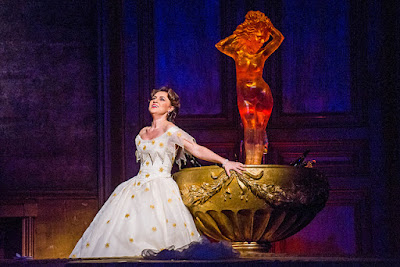 Venera Gimadieva as Violetta in Richard Eyre's Royal Opera production of La Traviata, 2016. Photo by Tristram Kenton
Russian soprano Venera Gimadieva makes her debut at the Royal Opera House as Violetta and will sing most of the performances and perhaps rightly so. The night I saw her she brought the house down. Her voice is big enough to dominate the Royal Opera House with its lyrical beauty and passionate tones. When she cries, we weep as she goes from the exaltation of love to a devastating death scene where only false hope remains and it is followed by death.

Albanian tenor Saimir Pirgu as her lover Alfredo Germont was a match and a foil for Gimadieva. He has a limber voice that scaled up easily with nice control and display of emotion. The final encounter and reconciliation with Violetta was splendidly moving.

Luca Salsi made his Royal Opera debut as Giorgio Germont, the father who destroys Violetta’s and his son Alfredo’s love for the sake of his daughter’s happiness. He must exude sympathy and humanity to gain our grudging approval especially when he tells her that she can always find somebody else to love. Verdi steps in to help with “Purra siccome un angelo”, a poignant affirmation of paternal love and the even more moving “Di Provenza il mar, il suol” with which he tries to convince his son to leave Violetta for the sake of family love and duty. You need a singer with vocal resonance but also emotional conviction to persuade us of the rightness of his cause. Salsi does it all.
The sets by Designer Bob Crowley consist of a gorgeous salon in Violetta’s house at the beginning and a stunning gambling table and sculptured ceiling in Flora’s house. The country house after Violetta’s salon and her bedroom in the final scene are of necessity threadbare.

There have been innumerable productions of Traviata since the premiere of Eyre’s staging. From Zeffirelli’s over-the-top opulence, to Jean-Francois Sivadier’s dark, minimalist approach to Willy Decker’s dazzling “clock” staging, La Traviata has covered a lot of ground.

Eyre’s production can best be described as traditional and that is meant as a high compliment. Non-traditional approaches can vary from the brilliant approach to directorial self-indulgence. Eyre and the current cast with the brilliant playing of the Orchestra of the Royal Opera House under the baton of Yves Abel and Royal Opera Chorus bring an outstanding night at the opera even after repeated viewings.
__________
La Traviata by Giuseppe Verdi opened on January 16 and will be performed fourteen times until March 19, 2016 at the Royal Opera, Covent Garden, London, U.K. It will be shown live in cinemas on February 4, 2016.  http://www.roh.org.uk/
Posted by James Karas at 6:39 AM