Les Liaisons Dangereuses was first produced more than thirty years ago but the play has lost none of its bite and cruelty as evidenced by the current staging at the Donmar Warehouse. Christopher Hampton adapted Choderlos de Laclos’s epistolary novel for the stage and gave us a frightful portrait of the French nobility before the French Revolution.

The 251-seat Donmar provides an intimacy that is impossible to achieve in a larger theatre and the audience gets to watch every grimace and facial expression of the actors. The cast, directed by Josie Rourke, is worth watching for every nuance that they bring to the performance. 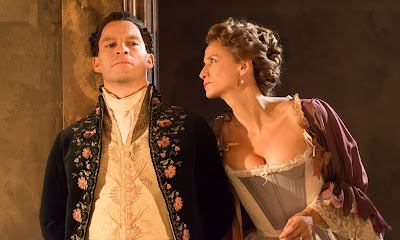 Dominic West and Janet McTeer in Les Liaisons Dangereuses. Photograph: Johan Persson
The production has Janet McTeer in the lead role of La Marquise de Merteuil and the play is worth seeing for her performance alone. The statuesque McTeer (she is taller than everyone one else in the cast) is a complex Marquise who has thrown off the shackles of an 18th century woman and replaced them with personal freedom and assertiveness. She refuses to succumb to any man and uses men for her pleasure, for revenge and perhaps for the sake of cruelty. She is conniving, intelligent, deceitful and remorseless. McTeer gives a defining and brilliant performance as a woman who destroys several lives in the game of her life and after all that, intends to simply continue.

The opposite of La Marquise is Madame de Tourvel (Elaine Cassidy), a woman of religious faith, marital fidelity and moral principles. The Vicomte de Valmont, the Marquise’s partner, targets her for conquest because of her principles and does not relent until he seduces her and destroys her. Cassidy’s Madame de Tourvel is beautiful, reserved but sensual underneath her façade of propriety and in the end falls in love with Valmont.

Valmont is the tool that the Marquise uses for fun and vengeance (mostly against him) and Domenic West does a good job in the role. He has the braggadocio to seduce the 15-year old Cecile (the beautiful Morfydd Clark) and de Tourvel but he lacked the edge of cruelty that the character must display however subtly. He is a victim of the Marquise, of course, and he does fall in love with de Tourvel but neither his viciousness nor his love are well displayed.

Edward Holcroft plays the innocent, sexually clueless and dumb Chevalier Danceny who has to be shoved into intercourse with Cecile and becomes the Marquise’s toy boy. Unfortunately Holcroft did not look or act these characteristics. He is simply too mature for the role.
Clark’s Cecile was the epitome of beauty, innocence and blooming sexuality. The child that was educated in a convent is tutored to become another Marquise.

Adjoa Andon played Madame de Volanges, Cecile’s mother and did a fine job except for, on occasion, moving her head a bit too vigorously when speaking.

The play moves from the city to rooms in the house in the country and requires quick set changes. The sets are kept to a minimum with a couple of couches, some paintings and a harpsichord. All are moved around quickly by the cast with minimal interruption to the development of the plot.

Despite some shortcomings, this is a marvelous production of a fascinating play.
__________
Les Liaisons Dangereuses by Christopher Hampton continues at the Donmar Warehouse, 41 Earlham Street, Covent Garden, London, England. www.donmarwarehouse.com/
Posted by James Karas at 4:10 PM