THE HOMECOMING – REVIEW OF JAMIE LLOYD PRODUCTION AT TRAFALGAR STUDIOS

Harold Pinter’s The Homecoming was first seen in 1965 and has become an entrenched classic of the British theatre. It has been revived for its 50th anniversary by Jamie Lloyd in a production that seeks to distance itself from previous stagings and yet retain the power and complexity of the play.

The result is largely favourable.

On the surface the play has the simplest of plots. Teddy and his wife Ruth are visiting his home in north London after an absence of six years. Teddy’s family consists of his father Max, his brothers Lenny and Joey as well as his uncle Sam. Teddy is teaching philosophy in America and the homecoming will reveal a number of plot complexities and character issues to keep one fascinated for hours. 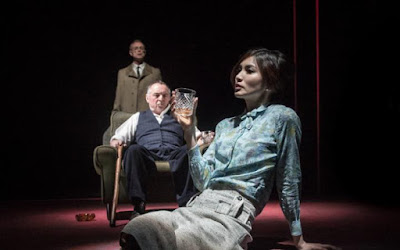 Gary Kemp, Ron Cook and Gemma Chan in 'The Homecoming'. [Photo:Marc Brenner]
Max, played with subliminal and then actual viciousness by Ron Cook, is a retired butcher who molds the past to suit his present mood. He idolizes his late wife one moment and calls her a slut the next. His best friend Mac had an affair with her including encounters in the back seat of Sam’s limo. He seems to have doubts about the paternity of his children and was almost certainly sexually inadequate. Cook with his face looking red like a piece of meat gives an outstanding performance.

Lenny (John Slim) dresses in a three-piece suit and tries to speak in elevated tones. His real character emerges through the patina of politeness: he is a pimp and a murderer. Joey (John MacMillan) is a would-be-boxer who has been punched on the head far more times than his brain can withstand. He attempts to have sex with his brother’s wife and fails miserably.

The frightful family is rounded off by Max’s brother Sam (Keith Allen) who is a prissy limo driver and may have had sex with his sister-in-law. Pinter’s plot is always opaque and no one should forget that he is treading on quicksand.

Gary Kemp as Teddy looks older than his brothers and he is just as inept at establishing a relationship with his wife as the others are in establishing one among themselves.

The central figure of the play is Ruth (Gemma Chan). She is attractive, distant, fetching, available and mysterious. She is a woman from the neighborhood who seems to have come from another world.
Lenny starts dancing with and kissing her and Joey lies on top of her in front of everyone. Chan maintains her mystery and manages to establish complete dominance over the men in a repulsive manner. She becomes a prostitute-goddess as she starts ordering the men around as if they were her slaves. An astonishing and subtle performance by Chan.

The stage by designer Soutra Gilmour has a pitch-black background with a red floor and several pieces of furniture. The centre piece is Max’s easy chair which in the end is turned into Ruth’s throne for the vassals to adore and obey her. Very effective.

Sound Designer George Dennis has inserted loud and extremely annoying rock music at the beginning and several other spots in the production. No doubt he had his reasons for doing so and annoying the audience was not one of them. He should have controlled the impulse.

The Homecoming deserves close attention to every line of dialogue, every pause and every gesture. It is an inexhaustible play. This production pays attention to and captures many of its subtleties.
__________

The Homecoming by Harold Pinter continues until February 13, 2016 at the Trafalgar Studios, 14 Whitehall, London, SW1A 2DY http://www.trafalgar-studios.co.uk/
Posted by James Karas at 10:09 AM