The 67th edition of the Aix-en-Provence Festival opened with Katie Mitchell’s production of Alcina. The production is worthy of many superlatives but I prefer to grant it the ultimate accolade and say it has the touch of genius. I choose the word with care and do not toss it carelessly as it is done in some media. 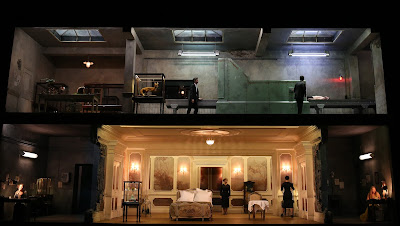 A view of the set of Alcina. Photo copyright Patrick Berger)


Mitchell has gone beyond a brilliant recreation of a baroque opera. She has taken a huge leap of the imagination and added a level to Handel’s work that few directors could have conceived and even fewer executed.

Alcina, as we know, opens by the mouth of a cave surrounded by rugged mountains. The medieval story unfolds as Bradamante (Katarina Bradić) disguised as her brother Ricciardo and her companion Melisso (Krzysztof Baczyk) meet the sorceress Morgana (Anna Prohaska). Morgana falls in love at first sight with the disguised Bradamante.

Mitchell and her designer Chloe Lamford set the opera around the 1920’s and the present. The opera opens in a palatial room with a large bed in the centre. A couple is engaged in what couples are engaged in when in bed and servants are milling around. The couple, we will learn, is the sorceress Alcina (Patricia Petibon) and her prisoner and lover Ruggiero (Phillippe Jaroussky) but for the time being they make a quick exit.

Two men looking like commandos enter the room. They wear bulletproof vests, point guns and look as if they could blow up the place. They are Bradamante and Melisso. Morgana falls in love with “Ricciardo” but in this production she expresses it in more earthy style by being tied to the bed, arms and feet, legs open, in a very explicit carnal invitation. Her aria “O s’apre il riso” speaks of temptation, her body screams of lust. The production gets sexually pretty explicit and Morgana seems to enjoy a bit of S&M.

The leap of the imagination that Mitchell has taken is to place part the opera in the 1920’s. Alcina turns her lovers into animals, rocks and trees like Circe. But the another part of the opera takes place in the present and Alcina and her sister Morgana are old, ugly women. They step from the palatial room into ugly spaces on each side and they change from being young and beautiful to being old and ugly. They are practicing magic on their guests and on themselves until their ability to cast spells is broken. Mitchell has added a whole new layer to the opera.

There are three playing areas on the main stage and two above them. On the upper tier there is a veritable transformation lab where humans are converted in beasts, rocks and plants. The sorceresses change from young to old by walking through magic doors. There is a great deal of bustle on stage and at times there is something going on in four places.

The result is an astoundingly original view of the opera that may have left some people in the audience gasping to follow what was going on. It is the only reason I can think of for some of them booing the creative team after giving a thunderous approval to the singers and the orchestra.

Brilliant conception can mean bugger-all without a stunning cast and orchestra and here it is all one can hope for.

Alcina is a complex character capable of evil and perverted love with prodigious vocal demands. French soprano Patricia Petibon gives a signature performance with vocal ardour and strength. Handel gives her the best arias of the opera and she sings with a vocal and emotional non pareil.

Morgana, her sister and partner in love and crime is ably sung by Austrian soprano Prohaska. She loved the decent Oronte (done well by tenor Antony Gregory) until she fell for Ricciardo and she can sing quite splendidly and emotively as in “Credete al mio dolore” where she brings her former lover to his emotional knees.

Serbian mezzo-soprano Katarina Bradić as Bradamante switches from pretending to be a man to being a beautiful woman. The transformation takes place in front of us as her commando outfit is exchanged for a red dress. Her voice descends easily into lush contralto territory and rises into soprano range with ease. A superb performance.

The whole story is about the faithful Bradamante going in search of her fiancé Ruggiero sung by the inimitable countertenor Phillippe Jaroussky. He is part of a small number of first rate singers who can reach the heights and achieve the delicacy of the male voice in upper vocal ranges. The role was originally sung by castrati and in modern productions is usually performed by mezzo-sopranos. Jaroussky performs it with ease and panache.

Conductor Andrea Marcon and the Freiburger Barockorchester got one of the most thunderous ovations. Well-deserved for a marvelous rendition of the score.

The wreath, however, goes to Katie Mitchell for conception and execution that goes far beyond ordinary brilliance and, it bears repeating, displays nothing less than a touch of genius.
______

Alcina by Georg Frederic Handel opened on July 2 and will be performed seven times until July 20, 2015 at the Grand Théâtre de Provence, Aix-en-Provence, France. http://festival-aix.com/
Posted by James Karas at 10:31 PM