ROMEO AND JULIET – REVIEW OF PRODUCTION AT SHAKESPEARE’S GLOBE

As the lights go on the stage at Shakespeare’s Globe to indicate the beginning of the performance of Romeo and Juliet, a group of rowdy musicians appear. They play various instruments, sing, dance and are quite delightful. One of them announces that this is a touring company production! Yikes. The musicians take off some of their costumes and the play begins. The musicians, you quickly realize, are the entire cast. 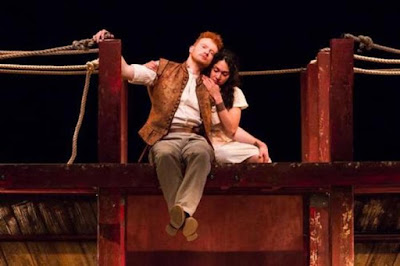 A touring production at Shakespeare’s Globe?  A touring production is what you get in the “provinces”, as they so rudely say, and not in the capital. You expect a pared down production, actors playing many roles and the exercise of great economy in costumes and props. Not to mention that the actors are probably not of the first rank, quite often.

Surprisingly most of these attributes applied to this production of Romeo and Juliet. Eight actors play eighteen roles. Only Cassie Layton as Juliet and Samuel Valentine as Romeo do not take multiple roles. All of them appear quite young and most seem to have limited experience. Perhaps to indicate youth, almost all of them sport prominent tattoos.

Talented young actors can do wonders for a production but Director Dominic Dromgoole’s take on the play almost guarantees a failing grade and an annoying night at the theatre.

Dromgoole chooses speed over fidelity to the text. He cuts scenes in the middle or anywhere he feels like it and characters from the next scene appear before the one in progress is finished. There are minor changes in costume and if people who do not know the play well are confused about what is going on, well, that’s their problem.

Cassie Layton is a waif of a girl and looks like she is about fourteen years old as Shakespeare suggests. She fits the part of the infatuated young girl. Valentine as Romeo looks more mature but his idea of depth of feeling is limited. In the final scene he delivers some of the most deeply moving lines with almost no emotional impact. He looks at his beautiful but dead Juliet and says or is supposed to say “Ah, Juliet, why art thou yet so fair?” Did he say the line and it was so muffled that I did not hear it or did he skip it completely?

He continues: “Shall I believe/ That unsubstantial death is amorous,/And that the lean abhorrèd monster keeps/Thee here in dark to be his paramour? In other words, even Death is in love with Juliet.

It is a heart-breaking scene and Romeo should be looking at his love with searing intensity. Valentine is not and the scene is robbed of most of its emotional power.

The Nurse (Sarah Higgins) with her thick Scottish accent is appropriately garrulous and quite amusing. She also handles the roles Lady Montague and Balthazar.

The rest of the cast is at least competent but with the revolving door changes of roles and the gerrymandering of the play you lose all perspective and just wait for the evening to be over.
_________

Romeo and Juliet by William Shakespeare played at Shakespeare’s Globe Theatre, 21 New Globe Walk, London, England and is now touring the provinces. Details of their tour can be found here: http://www.shakespearesglobe.com/theatre/whats-on/globe-theatre/romeo-and-juliet-2015
Posted by James Karas at 6:45 PM