“June is bustin’ out all over” is one of the robust songs of Carousel that grabs you by the collar and keeps you enthralled from first note to last. That is a good summary of the current production of Rodgers and Hammerstein’s great musical at the Stratford Festival.

Carousel has an amusement park on the New England coast as its backdrop but it examines domestic violence, abuse of power and redemption in its foreground. It reaches from a clambake on earth to “up there” and “down here” again with brilliant music, outstanding songs, and dance routines worthy of a first rate ballet.

Director Susan H. Schulman, Choreographer Michael Lichtefield and Set Designer Douglas Paraschuk have brought out the carnival atmosphere well as well as the darker side of the play superbly in this outstanding production. 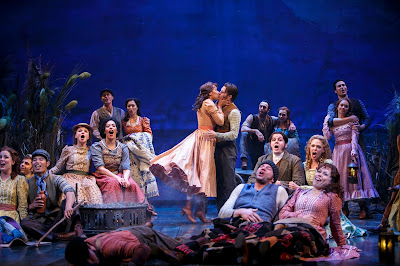 Members of the company in Carousel. Photography by David Hou.

The play’s prelude is set in the amusement park and during the overture we see a pantomime acted out. There is a carousel, clowns, jugglers, a bear and other people milling around in general mayhem. We meet some of the characters of the play as the scene is set for the encounter of Billy Bigelow (Jonathan Winsby) and Julie Jordan (Alexis Gordon). He is a carousel barker and she is a factory worker. They fall in love and they both lose their jobs.

Winsby has a big, expressive voice perfectly suited for the arrogant and abusive Bigelow. A petty criminal, Billy is a man full of anger and resentment and he goes as far as hitting his loving and submissive Julie. He eventually commits suicide after an unsuccessful attempt at robbery and murder. Winsby delivers Billy in all his complexity in a superb performance. Just listen to his “Soliloquy.”

Gordon’s Julie is a small woman, inexplicably in love with the brute. She understands the cause of his abusiveness and forgives him. Gordon’s Julie may be the classic victim of domestic abuse but Gordon’s singing is exceptional.

The ensemble of dancers and singers deserve enormous credit. There are a number of rousing ensemble pieces in addition to “June is bustin’” that carry you along as if you were on a high speed carousel.

Billy’s daughter Louise (Jacqueline Burtney), the Carnival Boy (Alex Black) and the company perform a ballet sequence of extraordinary beauty. This is no ordinary Broadway musical.

Alana Hibbert deserves special praise for her solo “You will never walk alone” and for leading in “A real nice clambake” as well as “June is bustin’.”  Robin Hutton as Mrs. Mullin and Robin Evan Willis as Carrie are the nasty and nice blondes respectively. Evan Buliung plays Jigger, the heavy of the play.

Abuse is a key element in Carousel. Mrs. Mullin, the owner of the carousel, tries to blackmail Billy into going with her. Julie’s employer keeps the women in his mill working as if they are slaves – if you are late to bed, you are fired. The policeman wants to throw Billy in jail if only he could find a reason. Billy is seething with violence and anger from his youth when he was a social reject and was convicted in magistrate’s court to his angry adulthood where he hits his wife and his daughter.

The production is successful on all counts as a brilliant presentation of a complex play and a great night at the theatre.
______

Carousel, with music by Richard Rodgers and book and lyrics by Oscar Hammerstein II, opened on May 29 and will run in repertory until October 11, 2015 at the Avon Theatre, Stratford, Ontario. www.stratfordfestival.ca
Posted by James Karas at 10:54 PM