The opera Svadba has travelled a long way to score a major success at the Aix-en-Provence Festival. It started in the summer of 2011 at the Berkeley Street Theatre, Toronto commissioned by the Queen of Puddings Music Theatre and was honoured as the “Outstanding New Musical/Opera by the Dora Mavor Moor Awards. Yes, all of that happened in Toronto. 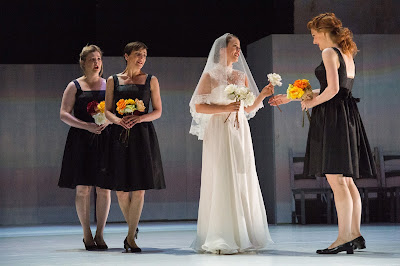 Svadba in Serbian means wedding and the opera was composed by Ana Sokolović, a Canadian of Serbian origin. It is based on the simplest of ideas. Six friends get together the night before the wedding of one of them and sing, dance and play games. They sing     a cappella on basically a bare stage. This is usually described as a bridal shower and although I have never been to one, I would have not thought that it is material for 55 minutes of beautiful and moving singing, dancing and some horsing around. It is and then some.

The six friends are Milica (Florie Valiquette) the bride, Danica (Liesbeth Devos), Lena (Jennifer Davis), Zora (Pauline Sikirdji), Nada (Andrea Ludwig) and Ljubica (Mireille Lebel). They are amazingly talented and sing as well as perform the other functions of the opera superbly.

The opera which receives its first staging in Europe opens with the six women marching determinedly to the front of the stage and singing almost angrily at the start about the marriage and loss of their friend. The mood changes a number of times as the seven songs are performed. They play blind man’s bluff, they dance, they joke, they dress in their bridesmaids’ dresses and sing some gorgeous and some nonsensical tunes. 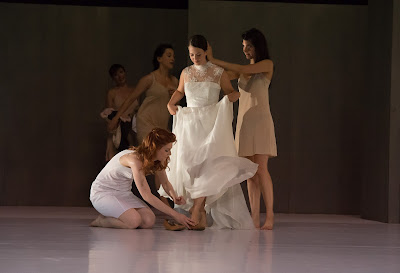 
The songs tell a story beyond the love of friendship and the loss as a result of marriage. Milica is an only daughter and her mother promised her to someone called Jovan but Milica wants Ilija.

Milica is dressed as a bride and sings a song of such exquisite beauty about the inescapable and inexorable loss that marriage brings. The mother who knows about love and loss bids her beautiful daughter to go and not to return. It is a moment of supreme beauty.

The opera is staged expertly by Ted Huffman and Zack Winokur with musical direction by Dảirine Ni Mheadhra. This new production by the Aix-en-Provence Festival is coproduced with five other European opera companies and will therefore be around for some time.

The best news is that Sokolović has been commissioned by the Canadian Opera Company to compose an opera based on a libretto by Michel Marc Bouchard. Stay tuned.
______

SVADBA by Ana Sokolović opened on July 3 and will be performed eight times until July 16, 2015 at the Théâtre du Jeu de Paume, Aix-en-Provence, France.  http://festival-aix.com/
Posted by James Karas at 11:33 AM