The Shaw Festival continues with its redoubtable tradition of offering a one-act play just before you settle down for lunch. This year’s offering is J. M. Barrie’s The Twelve-Pound Look, a 35-minute jewel that achieves humour, splendid character development and social commentary. When the lights went up to indicate the end of the performance, I had one of those moments when you say “oh, no, it can’t be over.” 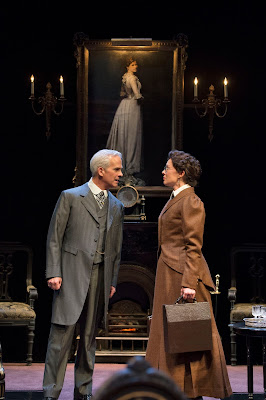 Patrick Galligan as Sir Harry Sims and Moya O’Connell as Kate in The Twelve-Pound Look.
Photo by David Cooper
The plot is simple. It is 1910 and the successful Harry Sims (Patrick Galligan) is about to become Sir Harry. He and his wife (Kate Besworth) are dressed for the upcoming occasion and are rehearsing his bow, kneeling and induction into the British upper orders.

Kate (Moya O’Connell) arrives to do some typing. Aside from being an independent woman in the new profession of a typist, she is Harry’s former wife who dumped him rather unceremoniously a few years ago. For whom did she dump him, wonders Harry.

The confrontation provides humour as the former spouses spar over their breakup. The characters develop as we delve into the personalities of the three people and  we get social commentary about the position of women in the traditional home and the new freedom. 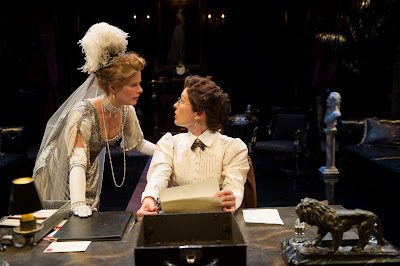 Director Lezlie Wade fine tunes every line of the play with attention to intonation, body movement and reaction. O’Connell has the best role where she is judicious, strong and victorious over the successful Harry who cannot understand why she left him. Even more importantly, we get glimpses of how thick Harry is in his utter failure to understand his “happy” and pampered wife.

Galligan plays the self-satisfied, obtuse Harry superbly and Besworth is the lovely, well-dressed and bejeweled doll who wakes up to the fact that more pearls around her neck are not necessarily a good thing.

Wade has the servants (played by Neil Barclay and Harveen Sandhu) sing “If Eve Had Left The Apple On The Bough” at the beginning of the performance with Sandhu carrying heavy objects like a mistreated woman. It is not in the play and it is unnecessary. We all got the message from the play.