The Aix-en-Provence Festival has brought back Robert Carsen’s 1991 production of A Midsummer Night’s Dream and one can only be grateful for the reprise.

Midsummer is one of Shakespeare’s most lyrical, poetic and funny plays and most people have views about it from the theater. Benjamin Britten and his partner Peter Pears kept about half of Shakespeare’s text and fashioned an opera with some sinewy and melodic music that is worthy of the bard’s poetry. The play deals with spirits who need ethereal music, lovers who deserve romantic notes and rustics who demand down to earth tunes. Britten provides them all. 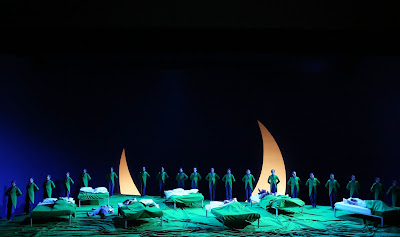 Carsen and Set Designer Michael Levine take their inspiration from the title and create an atmosphere that is indeed a dream.

The entire stage of the Théâtre de l’Archevêché is a converted into a huge bed covered with a green blanket. That is where people usually dream. Later in the play the one bed is replaced with several beds and at one time the beds are hoisted up in the air. This is a world of fairies, miraculous transformations, love and some artisans rehearsing a play, all taking place in the forest.

We have the fairies Oberon (Lawrence Zazzo) and Tytania (Sandrine Piau) quarreling and he decides to punish her by applying the juice of a flower to her eyes that will make her fall in love with the first creature that she sees. Countertenor Zazzo and soprano Piau make a marvelous couple in war and peace.

We have two Athenian couples in the forest who are quarreling about who loves whom. Lysander (Rupert Charlesworth) loves Hermia (Elizabeth DeShong) but so does Demetrius (John Chest). Helena (Layla Claire) loves Demetrius but the magic juice makes Lysander fall in love with her. Don’t worry about the details but the foursome will treat you to a lovers’ quarrel that is simply hilarious as well as musically wonderful.

The artisans of Athens go to the forest to rehearse Pyramus and Thisbe a play that they want to put on for the wedding celebrations of Theseus (Scott Conner) and Hippolyta (Allyson McHardy). This is a chance for broad comedy and Carsen makes the best use of it. Brindley Sherratt is a hilarious Bottom, a braggadocio who wants to play all the roles in the play. He is the one who is turned into an ass and Tytania falls in love with him. 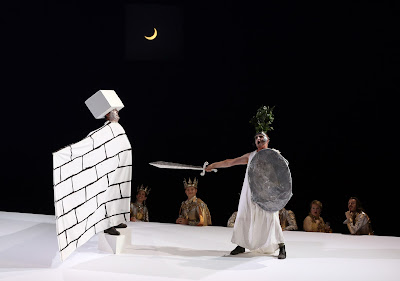 Brian Bannatyne-Scott plays the illiterate Snug who gets to play the lion in a funny but also touching way.

The Trinity Boys Choir make marvelous fairies and even better singers. Britten composed some beautiful music for them.

The Orchestre de l’Opéra national de Lyon under Kazushi Ono and the cast with the Choir provide an evening that is full of charm, poetry and music – the sort of thing perhaps that one can only experience in a dream.
______

A Midsummer Night’s Dre by Benjamin Britten opened on July 4 and will be performed seven times until July 20, 2015 at the Théâtre de l’Archevêché, Aix-en-Provence, France. www.festival-aix.com
Posted by James Karas at 11:45 PM