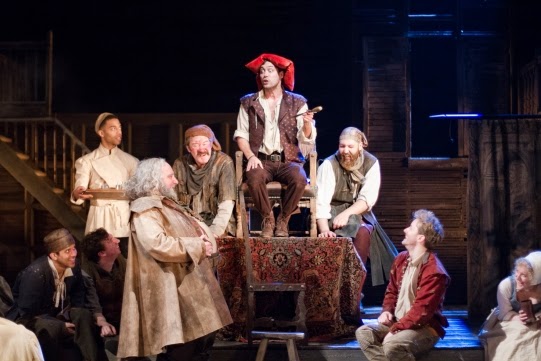 The renovated theatre sports a large stage with the audience seated on three sides. It gives immediacy to the performances that is second to none.

Director Gregory Doran gives full consideration to the political and martial part of the play as well as doing excellent work with its comic side in the tavern in Eastcheap. The central characters of the play are the antagonists Prince Hal (Alex Hassell) and Hotspur (Trevor White) but as usual the play is dominated by the immortal Falstaff in the hands of Antony Sher.

The play opens with a lengthy speech by King Henry IV (Jasper Britton) who has a troubled conscience having recently deposed and killed his cousin King Richard II. Rather than letting the King talk with no context, Doran shows Henry prostrate on the floor of an abbey. There is a large crucifix hanging from the ceiling and we hear church hymns. King Henry is doing penance for his sins. Now we know why he is dreaming of a crusade to Jerusalem.

King Henry is not the major character but Falstaff, even if he does not get most of the lines, dominates the play and our imagination. Antony Sher plays an exceptional Sir John. Sher is not a fat man and Doran seems to have resisted the temptation to stuff him with pillows. Sher does not need it. He is a superb Falstaff without resorting to cheap farcical tricks for laughs. This Falstaff is funny but he is also very human. There is a serious or perhaps just human side of his immorality or amorality.

He has some extraordinary mates at the tavern. Mistress Quickly (Paola Dionisotti), the worn-out owner of The Boar’s Head, is aptly named but looks like she has been around the block more times than can be reasonably expected of a human being. Falstaff’s follower Bardolph (Joshua Richards) with his bright red face is more pathetic than funny.

Hassell as Prince Hal is athletic, agile and every inch a prince except for the fact that he is mixed up with the wrong company and is enjoying it a bit too much. He shows his true nature when he leaves Cheapside and goes to fight the rebels. We quickly forget his transgressions and root for the brave warrior, dutiful son and humane prince. That is what we are supposed to do, in any event. Excellent work by Hassell. 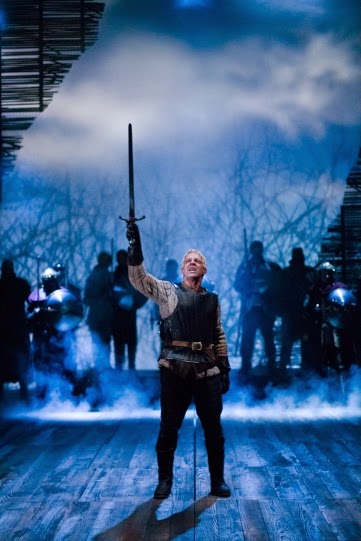 Hal is the counterpart of the rebellious Hotspur. Here Doran wants to contrast the two youths and does so very effectively. White plays Hotspur not as someone badly in need of anger management, as one would say today, but as an arrogant, easily infuriated young man who is practically mad. With his blond hair, athletic physique and upturned nose, this Hotspur is a war machine in search of glory.

The warring noblemen all believe or pretend to believe that they have God and right on their side but it is easier to see them as ambitious, greedy men seeking to enlarge their wealth and power. Joshua Richards doubles (many of the actors take on more than one role) as the Welsh Lord Owen Glendower. He is a fantastic character and Richards is good and entertaining in the role. Sean Chapman plays the Scots Earl of Douglas, a wild man with a thick accent that is quite marvelous.