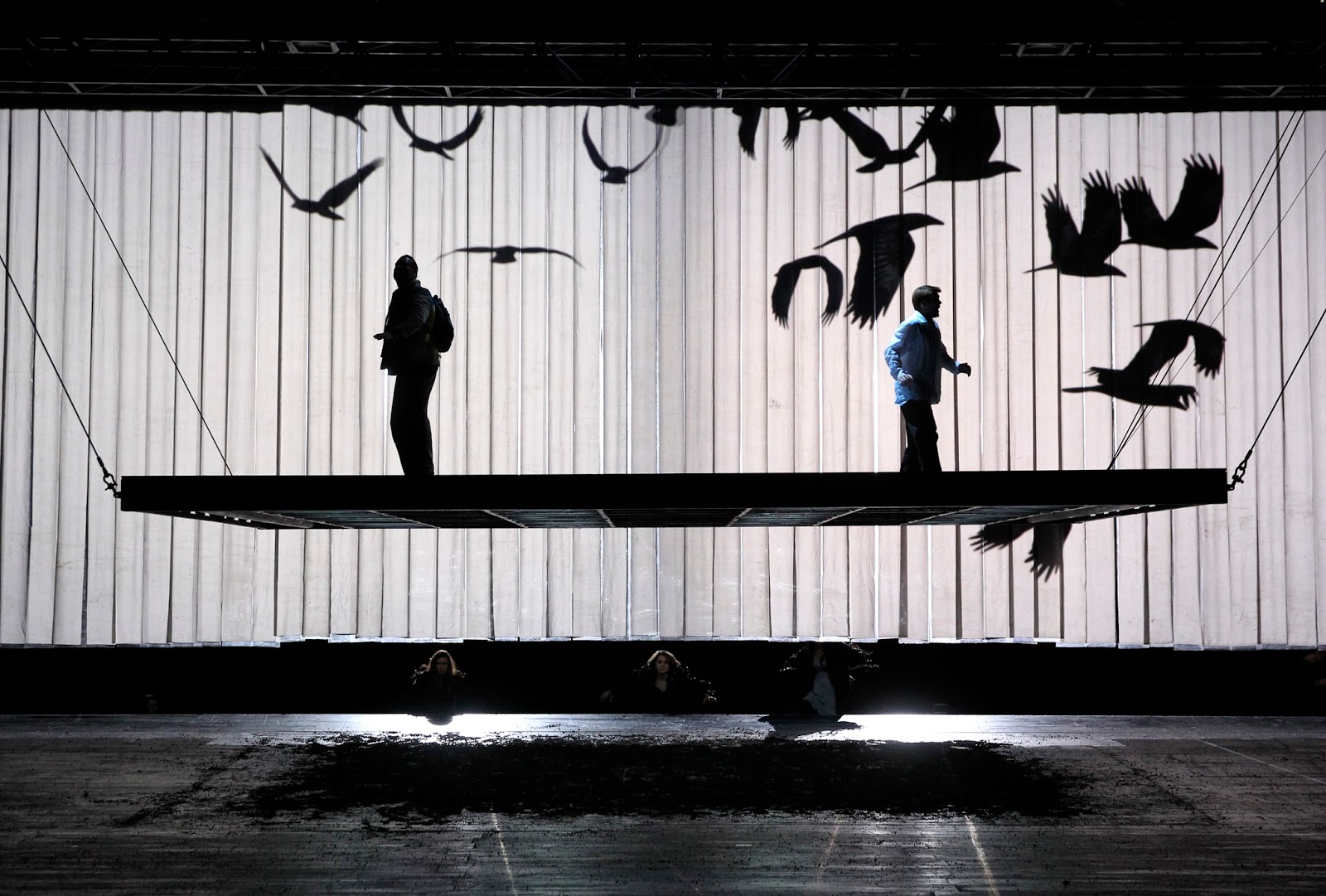 Simon McBurney has staged a daring production of The Magic Flute for the Aix-en-Provence Festival that is hard to pin down. The words that came to mind as I watched this idiosyncratic interpretation were unorthodox, high-tech, Brechtian, corporate, noir, brilliant – all of them applicable but none sufficient to describe the production.

We should recall that The Magic Flute is a play with songs written by Emanuel Schikaneder, a man of the popular theatre. He wanted a hit to make money and Mozart needed money. The Magic Flute has low comedy represented by the bird-catcher Papageno and more exalted themes like the pursuit of love, virtue and wisdom with a Masonic patina.

McBurney underplays the low comedy but everything else is there with a difference, to say the least.

Let’s begin. As the lights go on, we see glass booths on each side of the stage with technicians operating consoles and equipment. A screen is lowered and one of the technicians writes on a chalk board and his words are projected on the screen. We will see this a number of times including chalking arrows to point the direction Tamino should take. The technicians will remain on stage throughout and one of them will take a small part in the action in a tug-of-war with Papageno.

Tamino runs on the stage from a door leading to the auditorium wearing a track suit. The menacing monster is shown on screen and we see the technicians operating the equipment. Tamino faints and the Three Ladies dressed partly in army fatigues rush in. They may be the ladies-in-waiting of The Queen of the Night but it seems that they must double up as fierce security guards. We will soon see them in more becoming black dresses.

The Ladies undress Tamino to his T-shirt and jockey shorts and he is joined by Papageno wearing a yellow jacket and carrying a step-ladder. A cartoon is shown on the video screen showing someone descending a mountain and that turns into Papageno.

The stage is dominated by a large platform that can be tilted or even raised above head level as desired. We see the technicians manipulating the platform. When we need rain, we see a technician pouring water out of a can and the streams being projected onto the screen.

When Papageno needs birds (well, he does in this production) there are about twenty actors in the production who run around fluttering pieces of paper to imitate the flight of birds. Instead of Tamino pretending to play the flute, a member of the orchestra steps on stage and plays it for him. Papageno does not have to pretend to play the glockenspiel; an orchestra member steps up to the stage and plays it for him.

I can go on describing the unorthodox or at least different ways that McBurney treats scenes in his vision of The Flute. Is it the Brechtian idea of “epic theatre,” telling a story without the pretense of being realistic? Think of Homeric recitation versus theatrical representations. The dominant colour of the whole production is black. Even when the sun is supposed to shine at the end, all we get is a chalk drawing of it. 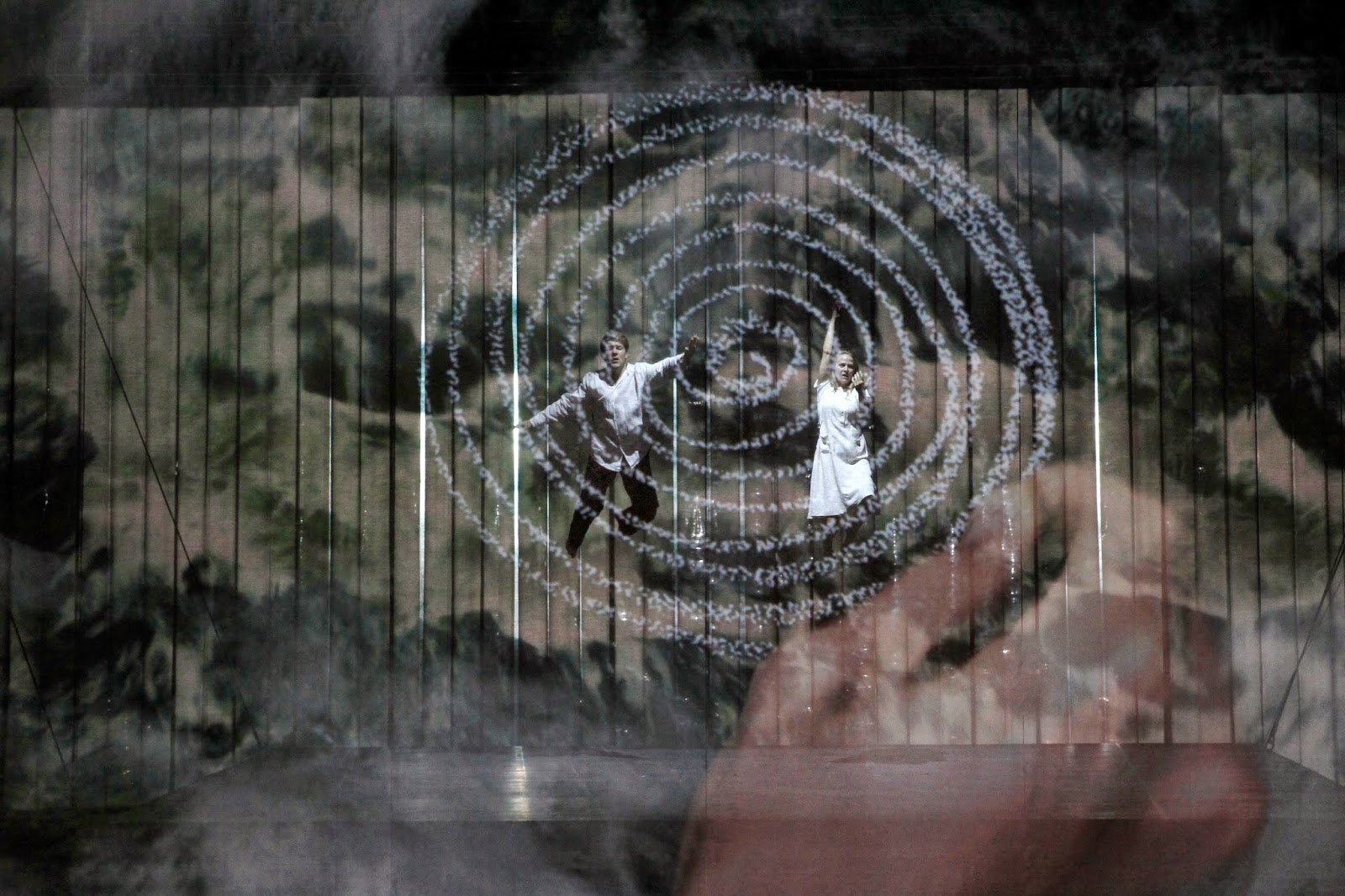 We need a tenor to sing of the heroic, love and virtue that Tamino is seeking and we have him in Stanislas de Barbeyrac. He has the lyric voice and looks to be romantic and strong when pursuing wisdom. He falls in love on sight with the picture of Pamina (Mari Eriksmoen) and we see her likeness on the screen and approve. Yes, she has a lovely voice and is every inch a princess.

Bass Christof Fischesser is Sarastro, the High Priest of Isis. He has a voice with a magnificent middle that descends to rumbling low notes that resonate with splendour. He sings his great aria “O Isis und Osiris” to suited gentlemen seated around a huge table looking like the board of directors of a multi-national. The acoustics were against him. He sang his other great aria “In diesen heil’gen Hallen” near the front of the stage and we got the full effect of his magnificent voice.

American Soprano Kathryn Lewek was recruited to replace Albina Shagimuratova as The Queen of the Night and the Conqueror of the High Fs. This Queen is old, decrepit, bent over, using a cane and a wheelchair. She still has to sing “Der Hölle Rache kocht in meinem Herzen” to her daughter because hell’s revenge cooks in her heart and she wants to get rid of her husband Sarastro. We may not care about him but we do want her to leap to those two high Fs and hit them with accuracy and precision. Heaven help the soprano who fails. Lewek does not fail and gives a thrilling performance.

Baritone Thomas Oliemans has the bearing and comic sense to make an excellent Papageno. He did so vocally but McBurney stayed away from the comic part of the opera with a few exceptions. There were a few laughs near the end; Papageno was allowed to interact with the glockenspiel player and the technician but overall laughter was minimal.

In the end, the performance received one of the most enthusiastic and sustained ovations I have seen in a long time.
_____


The Magic Flute by Wolfgang Amadeus Mozart with libretto by Emanuel Schikaneder opened on July 2 and will be performed a total of ten times until July 23, 2014 at the Grand Théâtre de Provence, Aix-en-Provence, France.  http://festival-aix.com/
Posted by James Karas at 10:52 AM