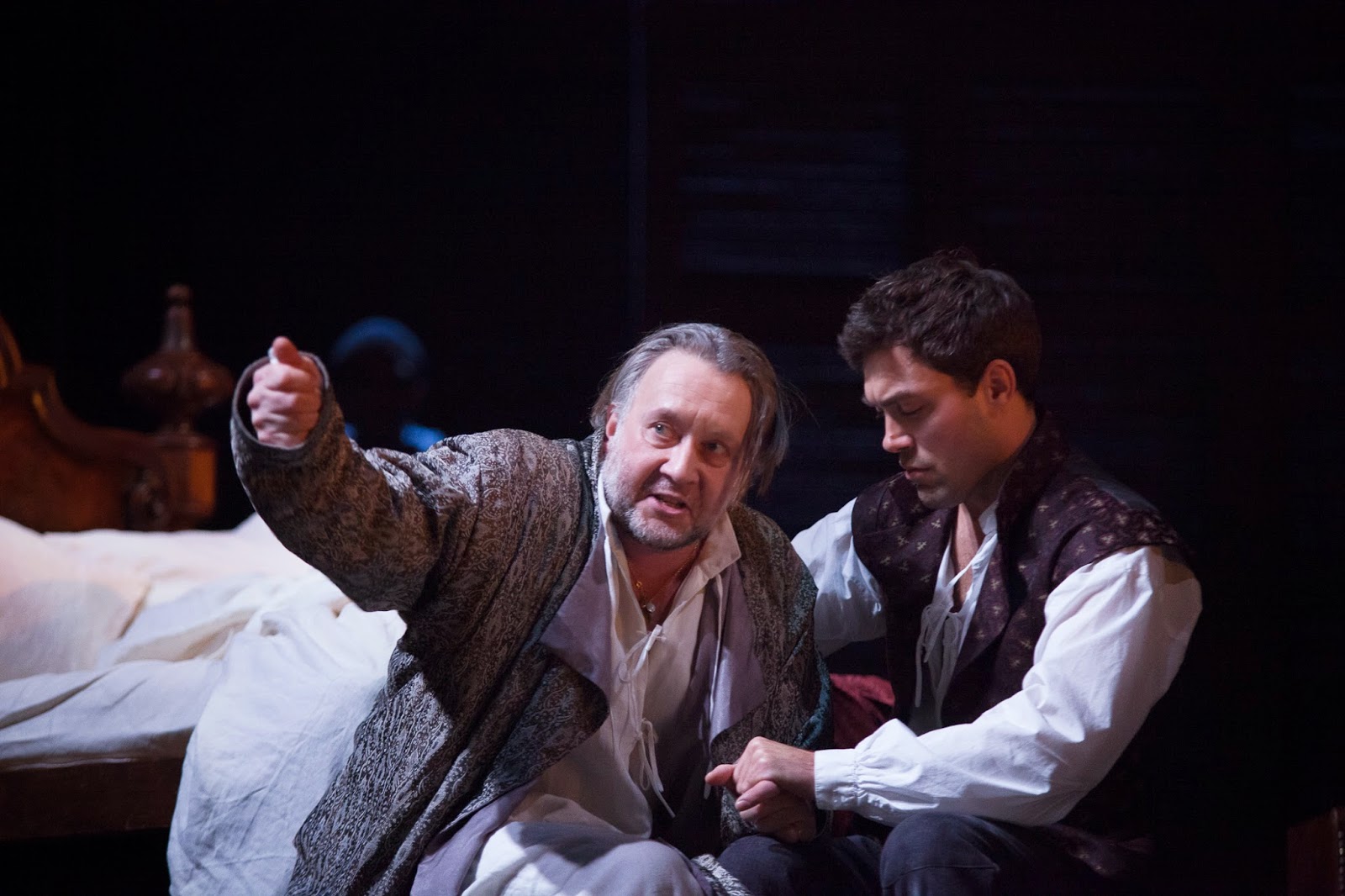 At the end of the second act of King Henry IV, Part II, Falstaff bids farewell to Doll Tearsheet as he heads out to war. As he exits the Eastcheap tavern, he falls on his knees, crying, and Doll runs up to him to console him. It is an unexpected act and a telling scene about the boisterous braggart and womanizer. We see a very human, different and touching side of the fat knight. That is one of the many touches that director Gregory Doran provides in his sensitive and outstanding production of King Henry IV, at the Royal Shakespeare Theatre in Stratford-upon-Avon.

Doran has an exceptional cast to work with. Antony Sher has an outstanding record as a Shakespearean actor and his portrayal of Falstaff is magnificent. His Falstaff is all that we expect of the heavy-drinking, wenching, stealing and bragging fat knight. But there is equal emphasis on the human side. When Falstaff stops bragging about his exploits and says “I am old” we see again his other side. In the end, when Prince Hal as King Henry V rejects Falstaff with “I know thee not, old man” and treats their relationship and escapades as a bad dream our sympathy is with Falstaff and not him.

The production has many superb performances. Some of the actors play members of the nobility who express their positions with assurance, conviction and fine diction. Simon Thorp  as Lord Chief Justice, Sean Chapman as the Earl of Northumberland, Youssef Kerkour as the Earl of Westmoreland, Keith Osborn as the Archbishop of York and Nicholas Gerard-Martin as Lord Hastings are some of the peers in that category.

Jasper Britton is excellent as the conscience-stricken King Henry IV who sees the rebels do unto him what he did to his cousin King Richard II. He has a marvelous seen with Prince Hal who seems to have grabbed the crown from his bed. This is an almost operatic scene of confrontation and reconciliation. 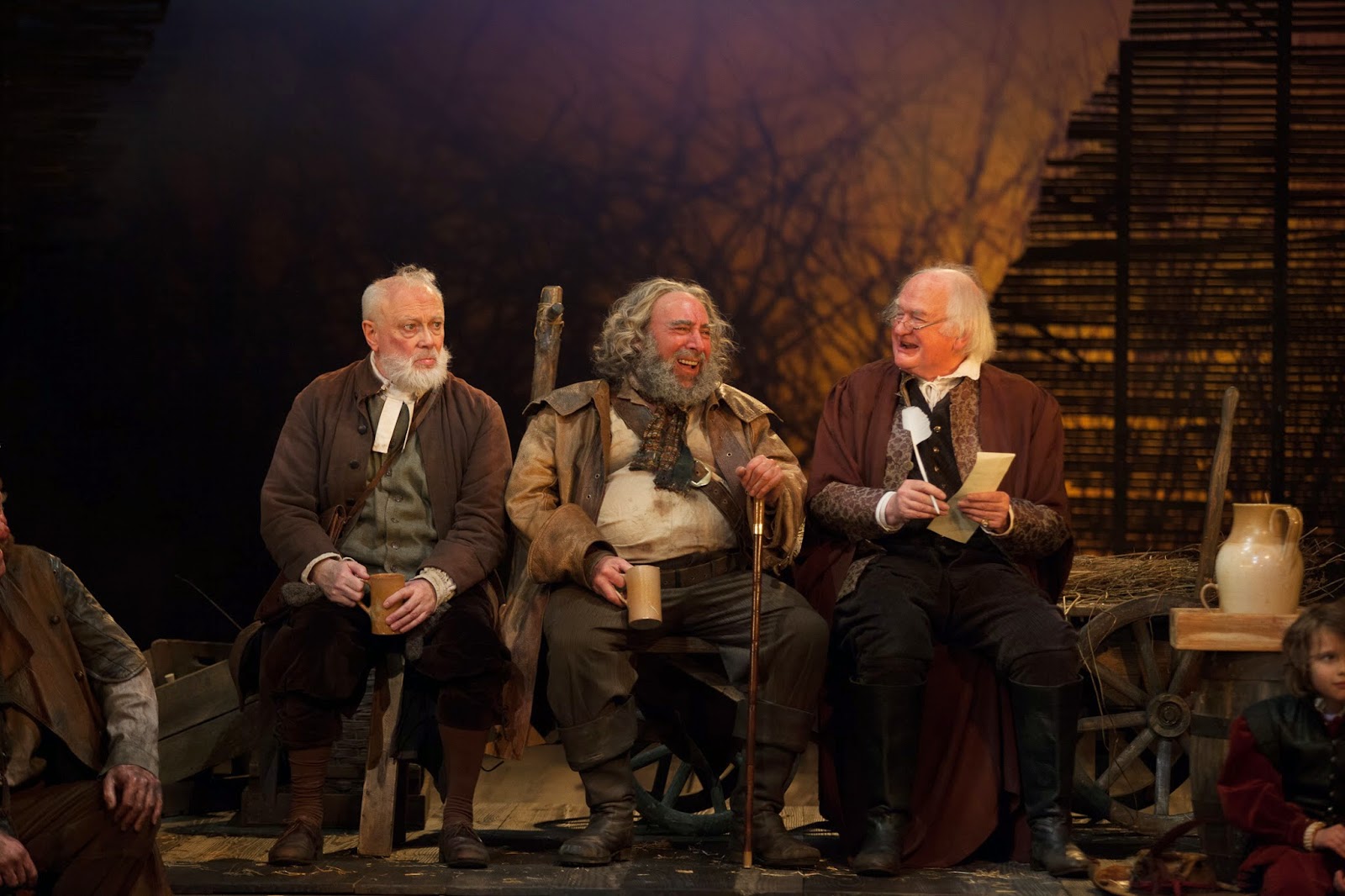 The play goes all over England but the most interesting scenes are the ones in Eastcheap and Justice Shallow’s house. It is here that we the other side of English life. Mistress Quickly (Paola Dionisotti), the owner of the tavern and Doll Tearsheet (Nia Gwynne) have names that contain full descriptions of their characters and we bow to the actors for their performances. The pathetic recruits elicit some laughter but no one should laugh without sorrow at their fate. Again, Doran does outstanding work in presenting these dregs of humanity.

Justices Shallow (Oliver Ford Davies) and Silence (Jim Hooper) benefit from being played by superior Shakespearean actors superbly directed. Both are figures of ridicule and Doran takes full advantage of the opportunities provided by Shakespeare. Hooper has few lines but with a tuft of hair on the top of his head and proper timing in his speeches he becomes a riot. The foolish Shallow in the hands of Davies comes to dominate his scenes.

An excellent cast and a director who is faithful to the text but enhances it with marvelous touches is the type of production you want to see for a great night at the theatre.
__________


King Henry IV, Part II by William Shakespeare opened on March 18 and will play until September 6, 2014 at the Royal Shakespeare Theatre, Stratford-upon-Avon, England. www.rsc.org.uk
Posted by James Karas at 5:38 AM