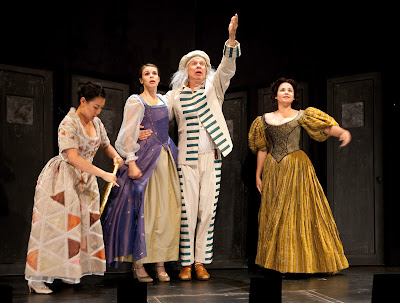 Reviewed by James Karas
** (out of five)

The Royal Comedians (Moliere) by Mikhail Bulgakov contains a funny scene from Tartuffe. You may recall that Elmire is trying to expose the religious fraud Tartuffe to her gullible husband Orgon. She has him hide under a table while Tartuffe tries to seduce her. She sends Tartuffe out to make sure all the doors are locked and her husband comes out from under the table. She covers him with the table cloth and when Tartuffe returns, he reaches under the table cloth thinking it is Elmire and of course grabs the wrong organs. It is a hilarious moment.

Unfortunately, in the Soulpepper production of Bulgakov’s play it is just about the only funny scene. The Royal Comedians premiered in the Russia of Stalin in 1936 and although it is ostensibly about Moliere it has much more to say about artistic life in the Soviet Union.

Moliere played by Diego Matamoros is a decent human being with more than the usual allotment of troubles. He leaves his wife Madéleine (Raquel Duffy) for the younger Armande (Sarah Koehn) who may be his daughter by the former. He is accused of being sacrilegious and falls out of favour with Louis XIV. You could lose your life from any one of those “troubles”.

He runs a colourful troupe of actors and there are some theatrics including several scenes from Moliere’s plays. The problem is that the play is simply not funny.

During the first half, we are on stage, behind the scenes or before the king. In the second half, the play becomes more overtly Stalinist. We are in a dungeon where we witness torture, forced confessions and oppression. This is dark comedy both literally and metaphorically.

This is a modern dress production even though there are some costumes that refer to Moliere’s 17th century. That is fair enough because Bulgakov was illustrating life under Stalin far more than life under Louis XIV.

I cannot really fault the actors for their acting. They seemed to be doing well in what they were told to do but nothing had much of an effect on the audience. Stuart Hughes, dressed in black, wearing an eye patch and boots was a farcical and brutish Marquis D’Orsini. Michael Hanrahan was a similarly brutish Marquis de Charron. Gregory Prest as Louis XIV looked like an actor playing Louis XIV. This was no doubt intentional but it left me cold.

William Webster was genuinely good as Bouton as was Daniel Williston as The Honest Cobbler. Michael Simpson garnered sympathy from a back injury and acted well as De La Grange. But none of this was enough to lift the play past the bearable. Lorenzo Savoini provides some interesting sets – all black with lots of doors leading to cells or wherever you want them to go.

The last comment must be reserved for Director Laszlo Marton who simply did not deliver a very good production. Is it just the play? Probably not. We need a better vision and approach to make us laugh and cringe at the great artists and the closed brutal society that they lived in, in the 17th and 20th centuries.
_________
The Royal Comedians (Moliere) by Mikhail Bulgakov opened on August 7 and continues in repertory until September 21, 2012 at the Young Centre for the Performing Arts, 55 Mill Street, Toronto, Ontario. www.soulpepper.ca 416 866-8666.