SATIRE ABOUT THE WAR OF 1812 NOT PARTICULARLY ENTERTAINING AT STRATFORD 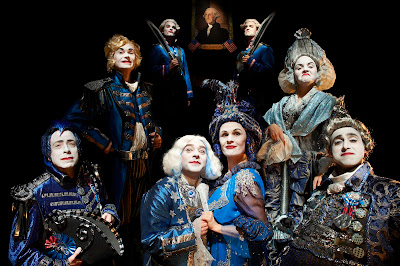 Michael Hollingsworth has created a one-man industry writing plays about Canadian history. He calls his series of plays The History of the Village of the Small Huts (i.e. Canada) and it has kept him busy for about thirty years. The Stratford Shakespeare Festival kills several birds by producing his The War of 1812, albeit in the tiny Studio Theatre Annex: it produces a Canadian play, about Canadian history on the 200th anniversary of the event. What more do you want?

Hollingsworth also directs this production by VideoCabaret of which he is an Artistic Director. He is not interested in a narrative or patriotic tale of the war but he does give us a satirical look at the conflict that pitted the British Empire against the recently created United States with the Natives in the middle and probably getting the worst of it.

Eight actors represent several dozen characters from the American, British and Native sides. The actors wear heavy make-up, almost white faces with red lips. They usually address the audience instead of each other. The women speak frequently in falsetto voices and no one speaks in a natural tone.

The characters appear almost like marionettes and they speak in an exaggerated and at times gesticulatory manner. They may be seen as clowns or certainly caricatures of the roles that they portray. It is a satire, after all.

Jacob James, for example, portrays President James Madison, who is short, wears a wig and has an almost white face and red lips. He gesticulates when he talks. He also represents Rev. John Strachan from the British side as well as an American and British Soldier.

Linda Prystawska is Dolly Madison, Laura Secord and Ann Strachan with fairly similar characterization of all of them The point may be that these people are all fools and are involved in a foolish war. No argument there.

Anand Rajaram plays a stentorian Tecumseh and the cowardly General Dearborn. Again, they are portrayed as foolish people but for all the satire there is very little humour or laughter in the portraits of these characters.

Richard Clarkin plays the clownish General Isaac Brock from the British side and General Wingfield Scott for the American wing.

The action takes place in the dark and lights are focused on the faces of the actors. There are no props to speak of except for a couple of portraits and some maps that are shown. The plot moves quickly in short scenes, almost vignettes.

Despite the name of the production company, there is no use of video.

I make no secret of the fact that I did not like the production. There are people who find this type of satire highly effective and entertaining but unfortunately it left me cold. Frequent use of phrases like “pardon my French” by a number of characters did not help and the lack of much humour made the situation worse.

This is a clown show or a marionette presentation of a satirical look at The War of 1812 in a style that simply did not resonate with me.

You are welcome to love the whole approach and disagree violently with me.

The War of 1812 by Michael Hollingsworth opened on July 1 and will run until August 12, 2012 at the Studio Theatre Annex, Stratford, Ontario. www.stratfordfestival.ca